If there's no Sriracha, how will we make our lunch just a little too spicy? 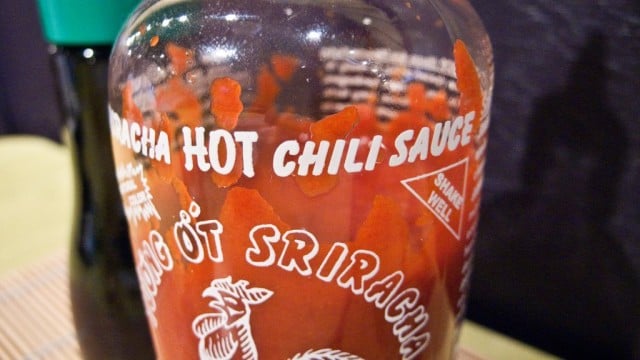 Sriracha is a delicious spicy chili sauce that hipsters (and geek bloggers) love, and its supply could be in peril. The reason is that the city of Irwindale, California where the sauce is made is suing Sriracha maker Huy Fong Foods for essentially macing local residents with wafting chili air.

Irwindale residents near the Sriracha factory have complained of symptoms that range from stinging eyes to headaches, and the smell is also a factor. Fans of the sauce probably enjoy its aroma, but the people who live near the plant and have to smell it constantly seem less enthused by it.

The strong smell even ruined a child’s birthday party forcing the family to move the outdoor party indoors where things don’t all smell like spicy chilis. Twitter is already overreacting to the possibility of a Sriracha shortage. The Atlantic has a solid roundup of anti-Irwindale messages.

Complaints from the city come at the peak of Sriracha-making season, which only lasts for two or three months in the fall because that’s when the chilis used to make the sauce are picked. If the factory is forced to shut down now, they won’t be able to able to make nearly enough sauce to meet demand. That could mean shortages or sharp price hikes.

Huy Fong Food initially agreed to work with the city to take action, but has more recently decided to deny that there’s a problem. So we think the Internet’s hate should be focused at them. There has to be a way to make delicious chili sauce without overwhelming the local populace. Figure it out, and please keep that spicy sauce flowing.

(via The Atlantic, image via Robert Occhialini)