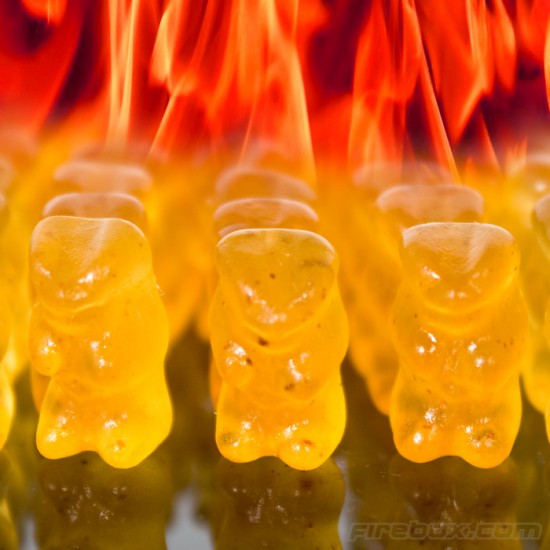 Available for pre-order over at Firebox, these habanero chili-infused gummy bears are basically the most perfect candy if you like spicy food, and can’t live without gummy bears. So, if you’re me, you’ve already spent the eight or so bucks on the pre-order. Also, if you dig fun and extremely odd flavor text, these gummy bears have an origin story, and it involves them climbing down into hell.

Once upon a time, there were three bears – a big bear, a medium sized bear and tiny weeny bear. Being so small, the tiny weeny bear was forever being left behind and ignored. His cousins the bigger bears got all the attention with their bright colours and huge size. The little bear would often find himself left behind. He was so small, he thought, he was barely a bear at all.

But the tiny weeny bear was a resourceful sort. Not to mention a bit of a dark horse. Which is why, one day, he left his massive cousins without saying goodbye and climbed down into hell. Which is harder than it sounds. Once there he met Beelzibear, the Antipooh, and over a bottle of tequila and a bowl of chilli, reached something of an agreement.

Some time later, the tiny weeny bear returned. But there was something different about him. He was still the same size, still the same shape, but he was packed with more fire than a honey pot full of habaneros. No longer did he mind being the smallest bear at the party – he had the power to make people gasp, cry, sweat and turn a hilarious shade of purple. Which is more than his chubby cousins could do. The first Evil Hot Gummi Bear was born.

That alone should be worth your eight dollars.