Mirror, Mirror, On the Wall, Which Man Wrote the Worst Wonder Woman Review of All? 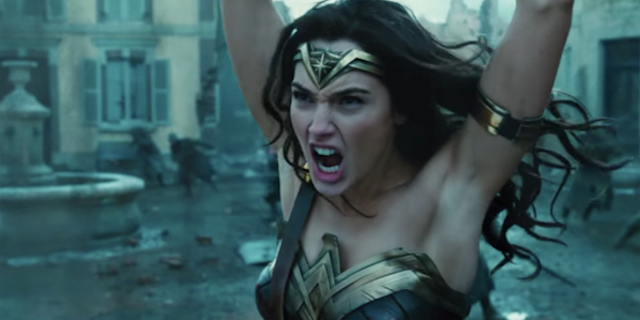 While almost all the reviews for Wonder Woman were positive or thoughtfully critical, you knew there were going to be exceptions. And, oh boy, are they exceptions.

Honestly, I can’t decide whether Vulture or National Review had the flaming-est and filthiest dumpster fire of a Wonder Woman review, but I trust the TMS readers to figure it out. Vulture‘s David Edelstein published a sexualizing, objectifying review which focused on star Gal Gadot’s appearance, while National Review ‘s Armond White criticized director Patty Jenkins as a “politically correct token” who pales beside the genius of Zack Snyder.

Reviewer David Edelstein focuses excessively on Gadot’s appearance in his review, even opening with this sentence: “The only grace note in the generally clunky Wonder Woman is its star, the five-foot-ten-inch Israeli actress and model Gal Gadot, who is somehow the perfect blend of superbabe-in-the-woods innocence and mouthiness.”

He continues to objectify and exoticize Gadot as the review goes on, noting, “She’s a treat here with her raspy accented voice and driving delivery. (Israeli women are a breed unto themselves, which I say with both admiration and trepidation.)” He also lets us know that, even when she’s not in her superhero costume, Gadot is still – phew! – attractive.  “She looks fabulous in her suffragette outfit with little specs,” the review reads, “but it’s not until she strips down to her superheroine bodice and shorts, pulls out her sword, and leaps into the fray, that she comes into her own.”

Worst of all, though, is his disclaimer about a lack of “kinkiness” in the film: “While this Wonder Woman is still into ropes (Diana’s lasso both catches bad guys and squeezes the truth out of them), fans might be disappointed that there’s no trace of the comic’s well-documented S&M kinkiness. With a female director, Patty Jenkins, at the helm, Diana isn’t even photographed to elicit slobbers.”

Edelstein also lets us know how Gadot compares to Lynda Carter, in terms of beauty. “I didn’t miss Lynda Carter’s buxom, apple-cheeked pinup, though. It was worth waiting for Gadot.”

In what universe is this what viewers most need to know about the film? I support and understand mentioning – once – that Gadot is indeed as Amazon-like and beautiful as the character is supposed to be; Lord knows I say similar stuff about Chris Hemsworth’s Thor. But Gadot’s physical appearance comes up again and again and again, with suggestive or infantilizing descriptors like “little specs,” “strips down,” and “innocence and mouthiness.” It’s skeevy as hell, and it has no place in a movie review. I don’t even care if any of it was tongue-in-cheek. No one should write about actresses like this.

Obviously, I don’t expect much from this particular publication. And from the lede onward – “Gal Gadot is a tomboy superheroine designed for our PC times” – I knew I was in for a heaping helping of NO, THANKS. But Armond White still managed to surprise me with his terrible opinions on director Patty Jenkins.

White complains that the film “is ‘feminist’ in a petty, trendy way” and posits that “[Wonder Woman’s] ‘She-ro’ status might satisfy comic-book fans who found it difficult to accept the spiritual complexity of Snyder’s male superheroes, but that also makes Wonder Woman a superficial experience.”

(He also, hilariously, has a whole paragraph based on the assumption that the all-women Amazons live “sexlessly” – despite Diana’s rather-on-the-nose line that “men are essential for procreation but when it comes to pleasure, unnecessary.”)

While the above is eye-rolling but expected, the review becomes truly offensive when it comes to Jenkins. “One cannot ignore the fact that Wonder Woman was made under cultural pressure,” writes White. “Jenkins is not an action director; clearly, she was hired only as a politically correct token. The best action sequence follows a bullet hurtling to its fatalistic destiny, recalling Snyder’s breath-baiting image of a bluebird fleeing the talons of a hawk in Legend of the Guardians: The Owls of Ga’hoole. But Jenkins’s Amazon warriors rappelling down cliffs and shooting arrows against German rifles lacks the daring, visual extravagance of Zhang Yimou’s The Great Wall. In all film history, Leni Riefenstahl and Kathryn Bigelow remain the only women to exhibit proficiency at kinetic filmmaking.”

Now, White is entitled to his opinions about Snyder’s films. (He is even allowed to write breathlessly about, of all films, The Owls of Ga’hoole.) Plenty of people really liked Batman V. Superman and Man of Steel, and they’re allowed to wish Wonder Woman were more like them.

What White is not allowed to do is question Jenkins’ hiring and make sweeping statements about the abilities of every woman filmmaker since the 1900s. This is sexism dressed up as artistic opinion, and it shouldn’t make it past an editor – even an editor at a reactionary publication.

Wonder Woman still has seriously high Rotten Tomatoes and Metacritic scores. And the vast majority of the not-so-positive reviews are thoughtfully written, speaking to plot, characterization, and message in ways that show actual engagement with the film itself. If these two reviews left you in a rage-heap like they did me, I recommend reminding yourself of the alternatives. There’s a lot of smart criticism out there, and we’re only going to get more of it as we keep pushing for better, more nuanced pop culture criticism than these reviews had to offer.

(Via Vulture and National Review; image via Warner Brothers Studios and DC Entertainment)