The Absolute Worst “Sexy” Halloween Costumes We Could Find 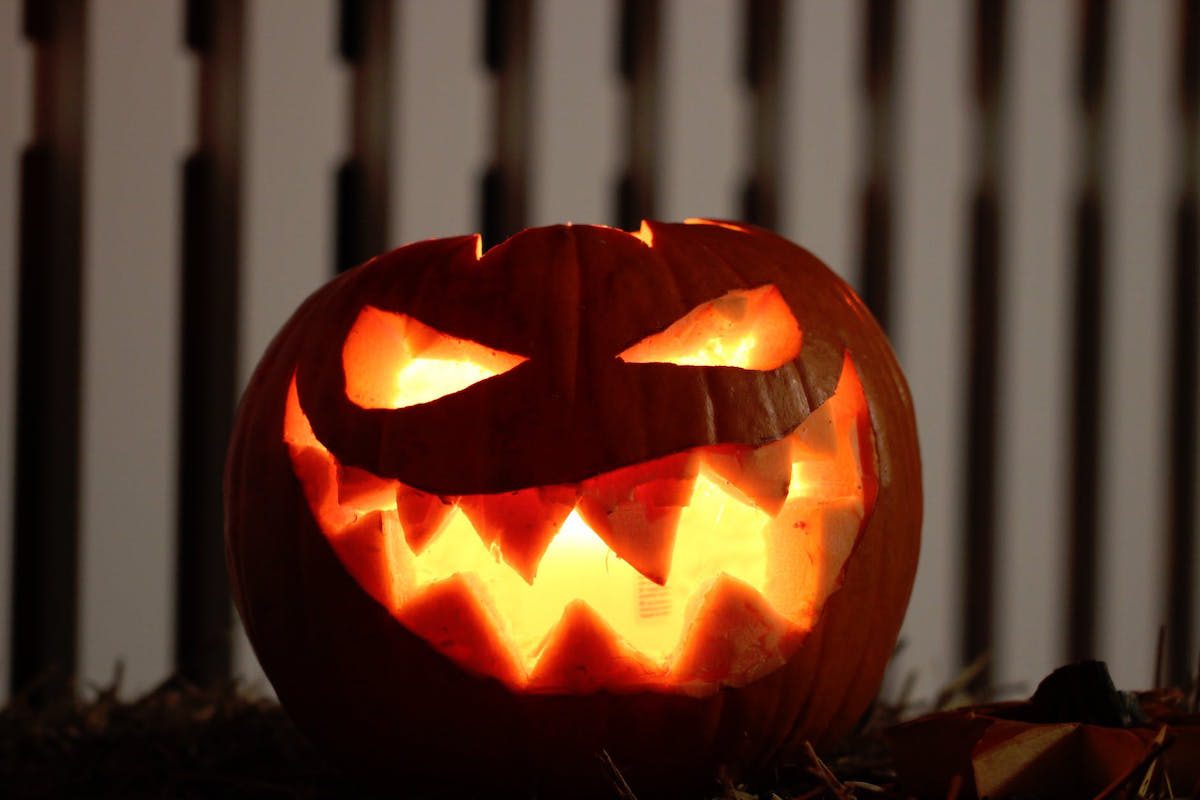 It’s hard being a woman on Halloween. You might want to wear clothing that shields you from the frigid October air, but surprise! The great majority of costumes for women come in one style: “sexy,” a short-skirted, skin-tight, low-cut version of the original costume.

While this concept has taken some heat in recent years, there’s no surfeit of “sexy” costumes out there for ladies, and some of them encompass the worst possible concepts that we can imagine embodying and slapping a “sexy” label on.

To be clear, we love the idea of rocking a “sexy” look if that’s your thing. Lots of people like to take a traditional costume and spice it up for Halloween. Women—no one of any gender—should ever be shamed for how much skin they choose to bare.

What we take issue with is that the overwhelming output of costumes for women are produced with “sexy” as the default. Search for “woman’s costume” and a concept or character and your results will come back scantily-clad. Try going into your basic pop-up Halloween store and emerging with a premade costume for a woman that isn’t “sexy.” And sizes for the kind of costumes many of us want to wear aren’t available, while “sexy” versions often perpetuate unrealistic standards of beauty and are not available in a variety of sizing.

Thus we arrive at the costumes that made us yell “WHAT?” very loudly this year: 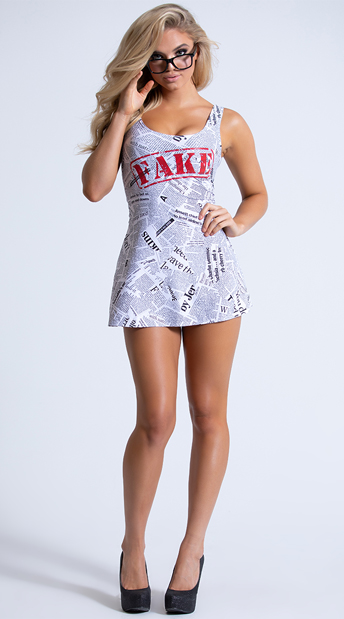 Are you the sort of person who believes the president’s yelling that the news media is out to get him for his uncountable misdeeds? Do we ever have a sexy costume for you!

Pair your newsprint dress, likely emblazoned with articles from all of the newsrooms massacred by corporate malfeasance or Facebook “pivot-to-video” scams, with a pair of Clark Kent-ish “reporter” glasses! Man, this one will really own the libs. (Yandy) 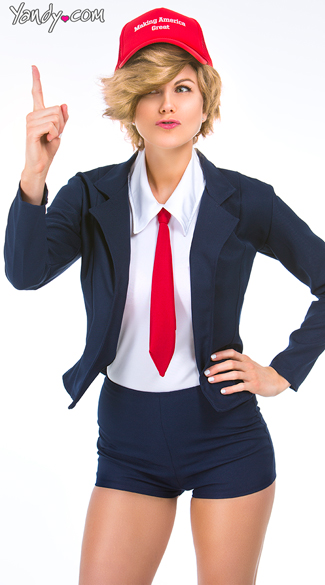 Nothing will own the libs harder, however, than your very own sexy version of the president. Of course, costume outfitter Yandy.com can’t risk the wrath of Trump’s copyrights and all the cash he’s raking in from his own red hat sales, so this costume is called “Donna T. Rumpshaker,” a sequence of words that I can never unsee.

This is all wrong, though: the blond wig is much too lustrous and well-shaped to approximate anything like the alien spawn that lives on Trump’s head, and the suit jacket is far more fitted than anything we’ve seen the self-made billionaire wear.

A word to the wise: your “Rumpshaker” hat will only say “MAKING AMERICA GREAT,” not again, which implies that America was never great, and is instead a lurching work in progress, which is historically accurate. So be careful at your MAGA Halloween party where you might be taken for a red commie out to eat the rich. (Yandy) 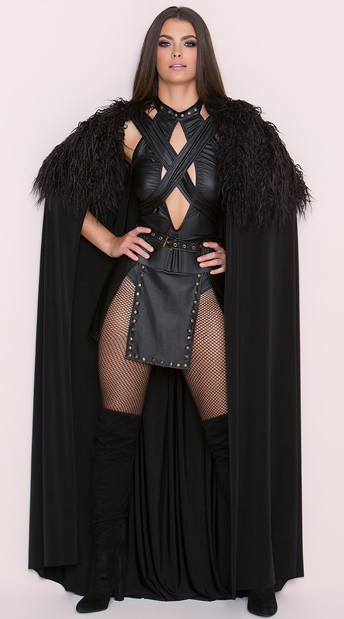 Technically called “Sexy Northern Queen,” this costume begs the question, what if you wanted to dress up as Game of Thrones‘ Jon Snow, only removed three-fourths of his costume? We’re not gonna lie, the cape is pretty awesome here, but I’m not sure the rest of the outfit is Winterfell-weather-ready. (Yandy)

Looking to pair your Sexy Jon Snow with a couples costume? Great, we have you covered. Here’s “Sexy Mother of Dragons” for your sexy aunt needs. (Yandy) 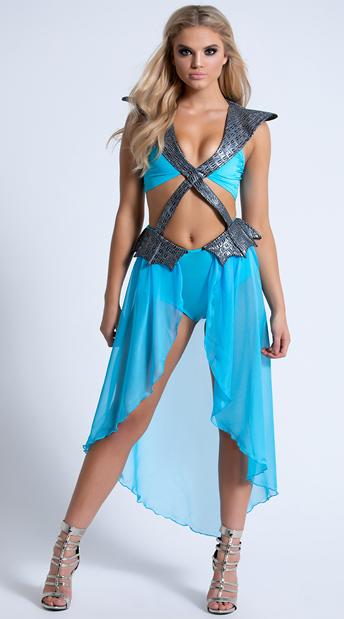 The new Halloween movie just opened big, with the empowering news of the largest horror opening with a female lead, and the biggest-ever opening for a movie with a female lead over age 55. So why not take deranged serial killer Michael Myers and make him extra sexxxy? The costume, which theoretically resembles Michael’s iconic blood-spattered blue coverall, is emblazoned with “HALLOWEEN” since there’s no other indication that this would have anything to do with Michael Myers or Halloween otherwise.

Amazon would like you to know that this costume does not come with the bloody knife. Nor does it include a Michael mask. It’s just a low-cut, tight-fitting blue jumpsuit that says “HALLOWEEN.”

In contrast, if you would like to dress your child up as an unhinged murderer out to kill their family members, we have good news! No one will mistake their Look. (Amazon) 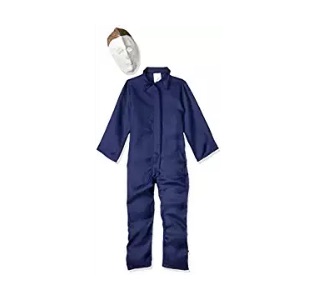 If all of this Halloween sexiness does not inspire you, never fear, you can also be a seductive Freddy Kreuger or a sensual Jason, or as they’re known “Sexy Miss Kreuger” and “Sexy Miss Voorhees.” 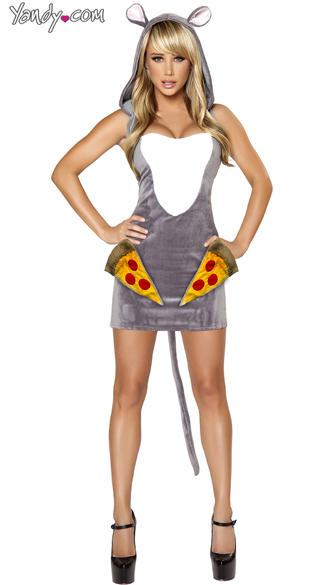 Yes, even an old Internet video sensation of an industrious rat maneuvering pizza around a New York City subway station can be made sexy when it comes to cladding women for Halloween.

Since “pizza rat” is the product of another age, 2015, when the world was full of hope and promise, you may need to explain this one to party-goers. “I’m sexy pizza rat,” you’ll say. The costume’s great age in rat years could account for why the Sexy Pizza Rat is 70% off. That’s a steal, as much so as a rat absconding with a slice.

Honestly, if this costume was a little more accommodating I would wear it myself, because memes are great and who doesn’t love a hood with rat ears and suggestive pepperoni pizza pockets? Just please let pizza rat be warm. It has struggled enough in its time. (Yandy)

For only $125, you can be the sexiest and most topical Founding Father of them all, “Ali Hamilton”! (Yandy) Sexy Aaron Burr not included, but thankfully we know that Leslie Odom Jr. exists.

Be on the lookout and don’t get complacent—the British are coming. (Amazon) 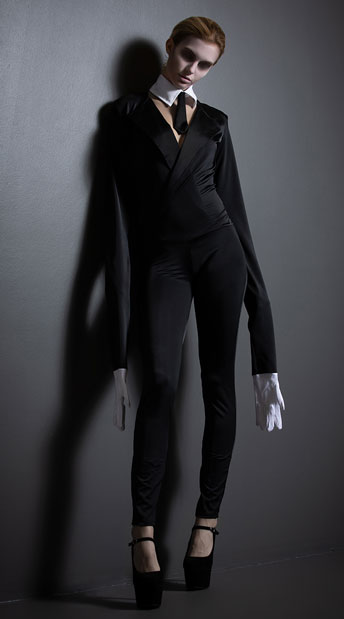 Of all of the costumes surveyed here, this was the Mary Sue staff’s favorite. For once not touted as “sexy” in its description, you too could be a “creepy slim man,” as the copy reads. “They say she’s an urban legend who stalks and abducts her prey. You won’t want to encounter this faceless babe in a dark forest.” Hmm, OK.

The concept of taking a creepypasta child-traumatizing monster and rendering it sleek and sultry is still head-scratching, not to mention the suggested 7-inch stiletto heels Yandy thinks you should pair this with. The true horror would be walking anywhere as the creepy slim man, let alone trying to snatch any children in this get-up.  (Yandy) 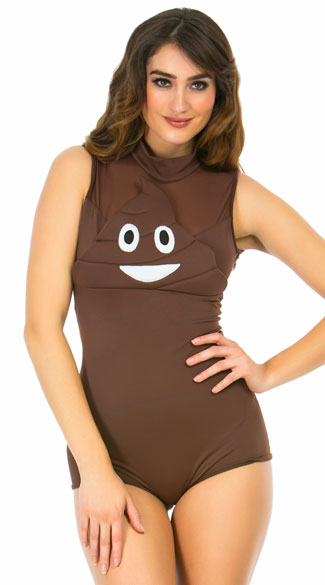 I’m speechless. I have reached the end of speech.

You can be a sexy poop emoji for 50% off right now, because literally no one thinks that this is a good idea.

No pants necessary when you’re a sexy poop emoji. (Yandy)

Thank you for coming on this, the sexiest of all Halloween journeys. We don’t think there’s anything wrong with “sexy” costumes, which can be empowering to wear, and many people these days have fun subverting the trend with truly bizarre “sexified” concepts. But we sure do wish that Halloween costumes for women were a) more widely available for a whole range of body types and b) produced more often as replications of the actual costume at hand, instead of a default “sexy” reimagining just for the ladies.