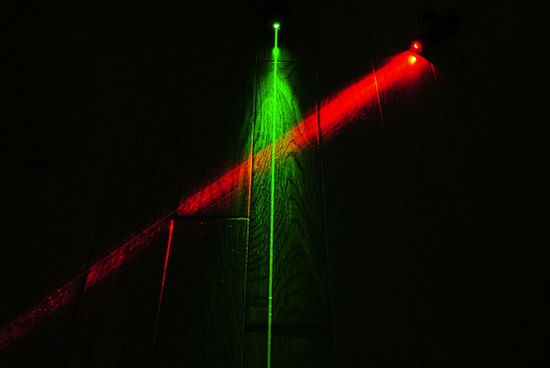 Northwestern University researchers can put a tiny little feather in their hat today as they have announced the creation of the world’s smallest working laser — one about the size of a virus. The incredibly miniaturized laser can operate at room temperature, and, even more impressively, seems to defy the diffraction limit of light using a nano-scale laser cavity that’s shaped like a bow tie. Bill Nye must be so very proud right now.

The diffraction limit is one of the main challenges to crafting nano-scale lasers. It refers to the fact that, as lenses get smaller and smaller, the edges of a lens skew the direction of light, making it harder and eventually impossible to project a coherent light beam like a laser  from a nano-scale device. Until now.

The team at Northwestern overcame the diffraction limit by directing the beam using nanoparticle dimers — tiny 3D structures that mimic the shape of a bow tie. Thanks to this shape, dimers create a sort of “antenna effect” for focussing light beams on the smallest scale possible while losing the least light to diffraction. Researchers then place “surface plasmons,” clusters of electrons that are constantly oscillating and can confine light on the smallest scales imaginable.

Having smaller and smaller lasers is going to be a key in fields like electronics and computing in the future as miniturazation continues to make all of our most important and relied upon gadgets easier to break, drop, or lose inside the couch cushions every year. That’s not the only benefit, though, as nano-scale lasers like this one can also help us learn more about how light works on a quantum scale. Which may not seem important to anyone but theoretical physicists, but hey, theoretical physicists need love too.