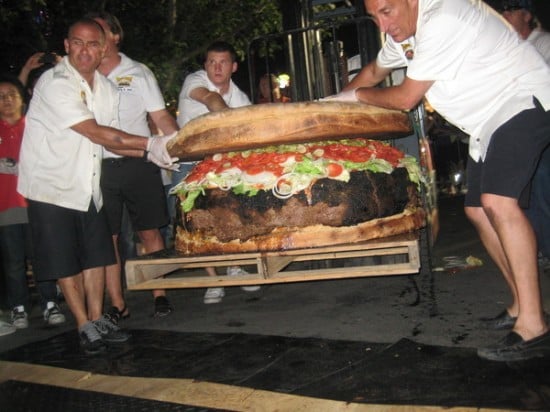 Yesterday, the people of California performed a truly heroic act in the service of their country by preparing the world’s largest burger on American soil. The 777 pound behemoth burger was cooked up at the Alameda County Fair and handily stole the title which had previously been held by Canadian contenders. This was the second, and finally successful, world record attempt by the burger’s creator Brett Enright.

In all, a whopping 590 pounds of beef were involved in the burger’s construction. Add on a 28 inch-thick 272 pound bun, 50 pounds of lettuce, 12 pounds of pickles, and another 50 pounds of lettuce and you’ve got yourself a record-smashing 1.375 million calorie meal. A notable requirement of the world record is that the burger must be consumed by people to qualify for the title. Some 500 brave souls took on the challenge, consuming just under half of the burger.