Exploring the relationship of Diana Prince and Steve Trevor is something that brings me utter joy. The two are fascinating because their love for each other is often explored in small bursts and spans throughout time, and now, with Wonder Woman 1984, we’re seeing an entirely different Steve and Diana.

Today, tons of information about the movie is coming out ahead of its DC FanDome panel on Saturday, and according to ComicBook.com, Diana Prince is very happy in the movie, prior to the return of Steve Trevor, but she also has a loneliness about her. Gadot talked to the press on set about how Diana has come to terms with the fact that she has to find happiness away from her former relationship with Steve and doesn’t have any close relationships in her life because she knows that she can’t really maintain them:

“She’s engaging with people, but she doesn’t have any close relationships because it’s either she’s going to hurt them, at some point she’ll have to disappear, or she’s going to get hurt because they’ll die and she won’t. And I think she accepted [that] as fact. She, you know, at her core, her calling is to be here and to help mankind to do good. And that’s exactly what she’s doing. But she’s still missing, you know, the one who was the love of her life. She never got to really explore the relationship. And that’s it. But she’s happy. She’s very happy.”

While Gadot was very open about where Diana Prince is, Chris Pine can’t really be that way about Steve Trevor. The last we saw of Steve, he sacrificed himself to save London and made sure that Diana knew that he loved her. He was a soldier lost to World War I, and Diana Prince had to deal with that loss all on her own in the world of man. 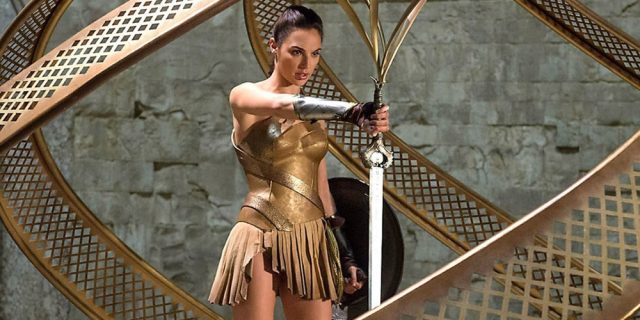 In Wonder Woman 1984, we know that Steve Trevor is going to be a product of the Dream stone due to messed up release timelines with the junior novelization. Before Diana knows of the pitfalls of the stone’s power, she wishes to bring back the love of her life and the relationship she didn’t get to explore, but that’s … kind of all we know about this Steve Trevor. And as someone who loves the character in the grand scheme of things, I’m incredibly interested in how we’ll see this Steve.

Chris Pine, though, wasn’t about to give up the secrets when the set visits went down years ago:

“You can decide whether it’s the right way or not. I love Patty and I love Gal and that I’m working on this film. I think it’s romantic and old-fashioned in the best way and simple in the best way and doesn’t reinvent the wheel in the best way. It’s just a great, good old fashioned storytelling. So, right? I have no idea, but I know that anytime Patty pitches something with me, she can pitch me anything. She’s the single best pitcher of ideas I’ve ever come across in the history of pitching.”

Is Wonder Woman 1984 just going to bring me pain? Yes, of course, because that’s the way Wondertrev works. And I, honestly, can’t wait to cry about it.