Wonder Woman's Amazons Finally Getting Their Own Origin | The Mary Sue

Wonder Woman’s Amazons Finally Getting An Origin of Their Own — How Much Does Who Creates It Matter? 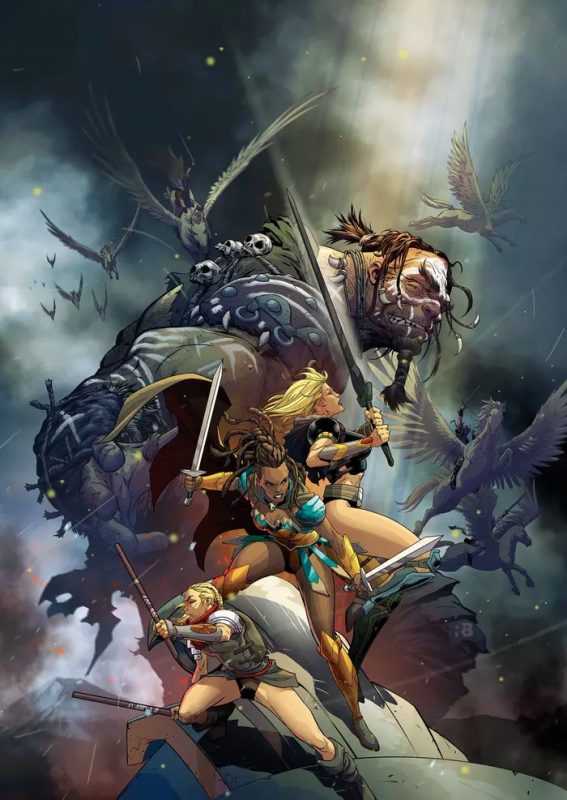 DC recently announced a Wonder Woman prequel series that will explore the history of the Amazons, which sounds pretty sweet. Less sweet is the fact that a female comics creator pitched a Wonder Woman prequel series a while back, never heard a response about it, only to hear the news that one was not only happening, but that it was happening based on a pitch from a male writer.

According to io9, DC announced a new series “called The Odyssey of the Amazons, set in Amazonian society years before the birth of Wonder Woman” that will follow them as they venture away from Themiscyra and out into the world, fighting mythological monsters along the way. It will be written by Underworld creator, Kevin Grevioux, who plans to “tie the origins of the Amazons in with powerful warrior women across different cultures.”

In an interview with The Hollywood Reporter, he said:

We were looking at the great epic poems, like the Iliad, Jason and the Argonauts — what if we did something with the Amazons that had that same epic power. That’s how it really started. In this one, we have, essentially, the origins of the Amazons. Where they came from, why there are so many across the planet? One of the legends of the Amazons is that they began in the Middle East, others have them near Greece, there was even a kind of Amazon in Africa amongst the Senegalese peoples. There were even the Valkyries in Norse mythology. What I wanted to do was find a way to explain that all these powerful women exist for a reason. The series is about these women traveling around the world and finding more of their kind, while trying to answer the question why they exist, and how they are who they are. It’s very interesting.

This sounds really cool. Different tellings of Wonder Woman’s story have alluded to a time when the Amazons were not bound by their island, but we’ve never seen it before, so this is an entirely new, untouched piece of Wonder Woman mythos to explore. That’s exciting, and something that many fans have wanted for a while, and I’m all about supporting all sorts of diversity in comics, so having a writer of color on Wonder Woman is awesome in its own right.

But it’s Wonder Woman, a female superhero (and icon alongside Superman and Batman) whose main titles have only ever been written by a majority of men and a handful of women. What’s more, this is the chance to create a new origin for the Wonder Woman mythology. Something about this opportunity being given to a man feels off.

Renae De Liz created a critically-acclaimed, Eisner-nominated take on Wonder Woman’s origin Legend of Wonder Woman, and I adore her take, but the fact is that this is one of many origins that Diana has had over the course of 75 years. Someone like her getting to create the Amazons’ backstory could’ve been epic!

This Amazons spin-off would be creating something from scratch. No matter who continues these stories afterwards, the imprint of a male writer’s work will be embedded into it forever. This is obviously not to say that no man should ever write Wonder Woman. There are plenty of male writers who’ve written her very well. But when you’re talking about starting something new, it seems like the perfect opportunity to not only find a good storyteller, but to do something that’s actually in line with what Wonder Woman stands for, pushing the needle forward in the comics industry for gender equality. There are plenty of female writers at all levels of the comics industry who could’ve done awesome things with this title.

There comes a point when, if something like gender equality is important to you, it has to be more than just talk only to let it “work itself out.” You have to take the concrete steps needed to achieve that goal and make it a priority. There are so many areas of the comics industry from which this goal can be addressed: hiring more female editors and executives, creating more female protagonists, and hiring more female writers and artists.

There are so many talented female comics writers out there (so many that we’re putting together a list just like our 30 Favorite Female Comic Artists of 2016 list!). But even if the worst were true. Even if the editors at DC heard zero “good” pitches from any women for this title, the reason for that might just be that men receive more opportunities in which they can hone their crafts.

After all, it’s not like you’ve never read a horrible comic by a dude, right? It happens. And it’s allowed to happen. Men have chances taken on them in a way that women don’t. And I would venture to say that DC could stand to take a lot more chances on a lot more women, perhaps focusing on the potential talent rather than on the initial pitch. Only when we level the playing field can we start saying things like “the best person for the job.”

Though, in this case, lived experience isn’t nothing, especially since it’s not just the story of one woman, but of a group of women who live and fight together. While I’m looking forward to The Odyssey of the Amazons, a part of me will always feel like the best person for this job would’ve been a woman.