In the current story out today, written and drawn by Jason Badower, Wonder Woman officiates the wedding of a woman she worked with while helping in New Orleans after Katrina and in Haiti. Then Clark Kent proceeds to ask the stupidest thing ever, and Wonder Woman schools him while smiling and shaking her head at him the way you likely will as you read it. Here’s the page in question: 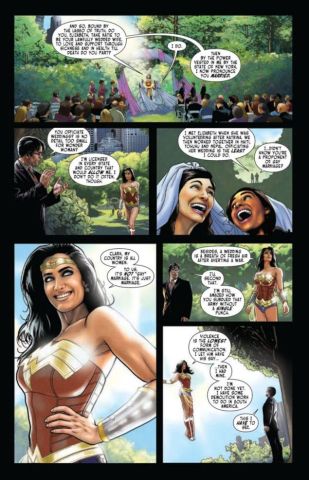 RIGHT?! A country completely inhabited by women, Clark! What did you think was happening? Awww. Stay gold, Clark. Stay gold.

In addition to all of this, the current installment of Sensation Comics features Wonder Woman explaining the misconceptions about the colors in her costume and acting as the most badass UN Executive Ambassador ever.

Dammit! I need to read more Wonder Woman! What do you think of the latest incarnation of Diana of Themyscira?