What We Know About the Women of Loki 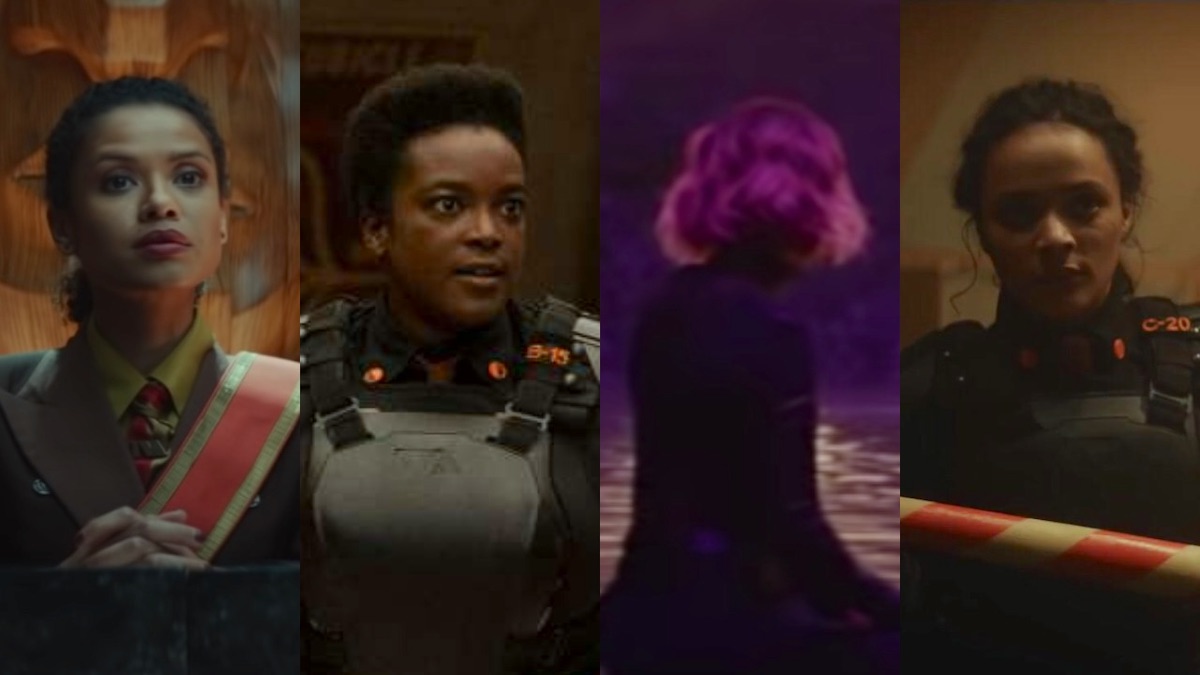 Ever since the Loki series was announced and began casting, most of the cast’s roles have remained shrouded in mystery. This was especially true for the leading ladies of Loki, who still remain unnamed on IMDb. But thanks to Marvel and Disney+’s press materials, we now know more about who some of the actors are playing, and recent trailers have allowed us to speculate further.

Let’s take a look at the fantastic talent Marvel Studios has lined up as potential friends, foes, and foils of Tom Hiddleston’s trickster Loki, and while we’re at it, we can make some educated guesses as to what their characters may mean for the show and the greater MCU. 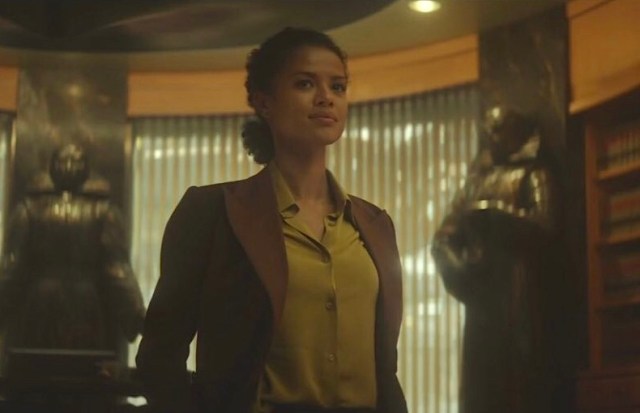 The in-demand British actor is known for her dynamic presence in movies like A Wrinkle in Time, Belle, Beyond the Lights, and many TV roles on everything from Doctor Who to The Morning Show. (And who could forget her turn in Black Mirror’s iconic “San Junipero”?) After months of wondering if Mbatha-Raw might be playing an established Loki-adjacent comics character like Enchantress or Lady Loki, it now seems like she’s bringing a new spin to someone else from Marvel lore. Mbatha-Raw’s character is referred to in recent official press materials as Judge Renslayer.

We see Judge Renslayer in the trailers with a position of high authority within the TVA, or Time Variance Authority, the bureaucracy tasked with maintaining timelines and alternate realities that captured the errant Loki. She appears to be questioning whether Loki should be involved in their activities and the risk TVA manager Mobius M. Mobius (Owen Wilson) is taking with this “variant” Loki.

The name “Renslayer” has a considerable comics background. There she’s known as Ravonna Renslayer (or “Terminatrix”), the daughter of the king of 40th-century Earth. The brilliant Ravonna is an excellent fighter and master of arcane weaponry, and has been everything from a princess to an assassin. Intriguingly, she has also used technology enabling her to shift her appearance—a skill Loki knows well.

Ravonna is a longtime love interest/antagonist of the time-traveling villain Kang the Conqueror. Kang is also rumored to be coming to the MCU, reportedly played by Lovecraft Country star Jonathan Majors in Ant-Man 3. So Renslayer’s introduction here could indicate a considerable part for both the character and Mbatha-Raw to play in the MCU going forward.

Throughout Marvel comics incarnations, the formidable Ravonna Renslayer has been sometimes a villain and sometimes a superhero ally. If Mbatha-Raw’s Renslayer is directly inspired by Ravonna’s canonical history, it remains a question as to what kind of role she occupies therein. Is Renslayer a “good” or “bad” guy on Loki? And isn’t that subjective when the titular character has often been a villain himself? One element to note is that in the comics, the TVA has its own army of soldiers made through cloning and cybernetics, called The Minutemen. The Minutemen are lead by the higher-ranked Justices. It’s probable that Loki merely swapped the word “Justice” for “Judge,” and that in addition to having judicial duties, Mbatha-Raw’s Renslayer is also a commander in her own right. I get the sense that she’s not going to be Loki’s biggest fan, and I can’t wait to watch Mbatha-Raw and Tom Hiddleston square off. 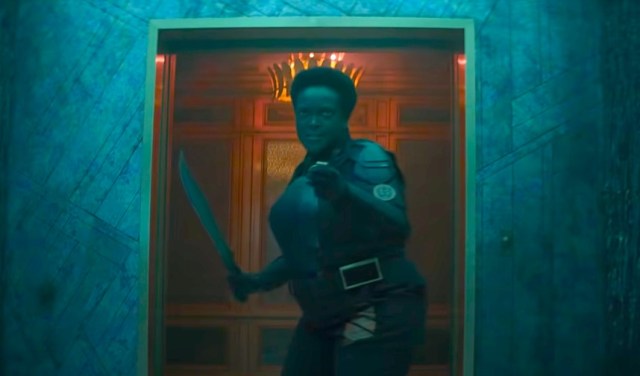 The Nigerian-born British actor has been seen in movies like Fantastic Beasts and Where to Find Them and is a standout on television series like Lovecraft Country, Luther, The End of the F***ing World, In the Flesh, Vera, and many more. She won a BAFTA TV award for the TV film Damilola, Our Loved Boy. Press materials for Loki named Mosaku’s character as Hunter B-15.

According to the Marvel Cinematic Universe Fandom wiki, Hunter B-15 is “a high-ranking soldier in the Time Variance Authority.” What I’m curious about is whether “Hunter” is a rank designation, or whether it could also imply that Mosaku’s character may be a freelance time-traveling bounty hunter, whom the TVA has turned to in the comics before in times of need. Either way, the name likely refers to the character being given the authority to hunt people across time, and no doubt possessing the unique skill set to do just that.

In the flashes we get to see of her in the most recent trailer, Mosaku’s Hunter B-15 looks to be a deathly adept warrior. Is she pursuing Loki—perhaps the one who catches him in the first place, or has to go after him if he gives the TVA the slip? Or is she a teammate who helps him on missions? Is she both? All I know for sure is that Mosaku’s going to be incredible in action and drama onscreen. 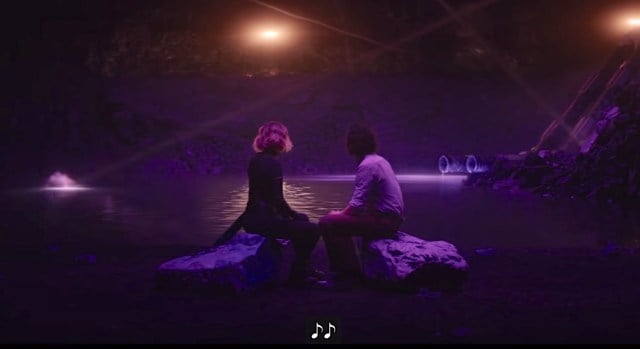 A British actor who has guest-starred on many a series like Into the Badlands and Silent Witness, Di Martino’s role in Loki has remained super-mysterious (we have yet to glimpse her face in the trailers). Ever since she was cast, several characters from the comics have been suggested for Di Martino. Speculation raged for months that she might be playing Lady Loki, bolstered by a set image of Di Martino wearing a costume that resembled one of Loki’s traditional costumes.

However, it does seem that Hiddleston and Di Martino are sharing scenes together, which would imply that if Di Martino is Lady Loki, she’s not the titular Loki’s shifted self but perhaps a Lady Loki from another timeline or universe. All we see of Di Martino in the most recent trailer is what appears to be the actor and Hiddleston sitting together, faced away from the camera, on an oddly purple-tinged landscape.

It’s still possible that Di Martino is playing this sort of “variant” Lady Loki, as rumors also swirl that Loki might encounter Old Loki (could he be played by the amazing Richard E. Grant?) as well as Kid Loki, who could potentially be introduced to join any future Young Avengers projects also teased by WandaVision’s twins Billy and Tommy and the casting of Xochitl Gomez as America Chavez, a.k.a Miss America. If she’s not playing Lady Loki, who are some other possibilities for Di Martino from Loki’s universe? She could be the sorceress Amora, a.k.a. Enchantress, a Thor villain (who was also “in love” with Thor at points) and fellow Asgardian who has occasionally allied with Loki. The powerful and ruthless Amora has shown flashes of heroism in some comics storylines, but has been summarized as ultimately “an opportunist seeking her own ends.” (No wonder she and Loki sometimes get along.) In recent incarnations like the YA novel from Marvel, Loki: Where Mischief Lies by Mackenzi Lee, Amora is depicted as a friend and kindred spirit to young Loki.

There’s also a second Enchantress, Sylvie Lushton, who was given her powers by Loki and models herself on the first Enchantress. Considering that the young actor Cailey Fleming is listed as playing one of the few named Loki IMDb characters, “Young Sylvie,” we may indeed be meeting the Sylvie Lushton version of Enchantress. Others have wondered if Di Martino could be playing Sigyn, another Asgardian with close comics (and Norse mythological) connections to Loki. In the comics, she’s tricked into marrying Loki and is renowned (as was her mythic predecessor) for her loyalty. Of course, Di Martino could also be playing a brand new, comics-unaffiliated character, but that’s less fun to speculate about. 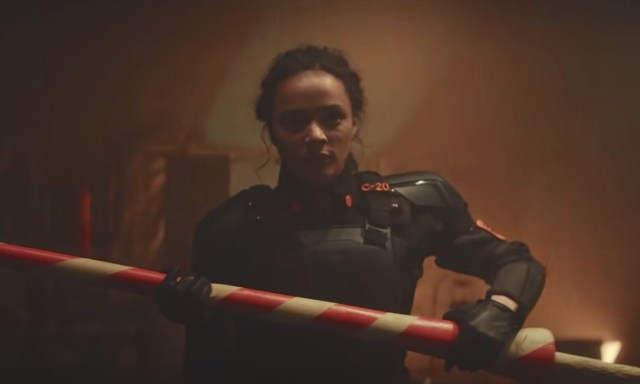 American actor Sasha Lane’s role on Loki remains as yet unnamed, though we can see in the trailer that her TVA designation is C-20. Lane, who has starred in movies like American Honey and the new Hellboy, and on AmazonPrime’s science fiction series Utopia, appears to be playing a total badass in armor who works for the TVA. (And is that a jousting lance?!)

Yet we also witness Lane’s character punching what seems to be a TVA soldier in the trailer, so does this mean she’s doing something against the TVA—or could the TVA be corrupted, and she’s fighting back against that? Or has she infiltrated them as someone else entirely?

Fans on Reddit have theorized that perhaps Lane’s character could be related to Marvel Comics’ Dísir, the Valkyries of Bor, rebellious, “cursed” Valkyries who have had ties with Asgardian goings-on as well as with Loki, Kid Loki, Hela, and Amora. If this were true, it’s another indication that we could be seeing more of Asgard and the Nine Realms explored throughout the Loki series. Our Princess Weekes had also considered last year if Gugu Mbatha-Raw could be playing Enchantress, Lady Loki, or Karnilla, a wildly powerful Asgardian sorceress who hasn’t yet seen the light of day in the MCU. Since we now know that Mbatha-Raw’s character is Judge Renslayer, Lane is another possibility for these parts.

Additional women in comics whose lives have intersected with Loki include Leah from Young Avengers, his friend Verity Willis, his assistant Zelma Stanton, Sylene, Loki’s daughter from another Earth, Tess Black, another daughter, and his Galaxy Guardian sister Angela. There are many highly capable and interesting ladies Loki has crossed paths with over the centuries. Lane, as well as Mosaku and Di Martino, could turn out to be someone we’ve seen in the pages of comics past.

One of the coolest elements about the upcoming Loki series is that we still know quite little about it beyond the initial TVA premise. This show could go absolutely anywhere in time or space, and all speculation may be for naught considering the many twists and turns it no doubt has in store.

But what we do know from its cast and trailer is that it boasts a stunning array of powerful female characters. Even better, most of the women we’ve seen featured and promoted by Loki materials are BIPOC actors. This prominent inclusivity makes me all the more excited about the show. Loki director Kate Herron (Sex Education) has it listed on her personal site’s About Me that she “is passionate about making female-driven stories that are as cinematic as they are funny, representative and have excellent vagina-jokes.” I hope each and every one of these elements is present in Loki.

Hiddleston’s trickster antics are best appreciated when he has other accomplished folks to play off of, and the series is primed to deliver just that. I can’t wait to meet the already-fascinating women of Loki and to learn their secrets. (I’m also ready to watch them throw Loki across the room in a fight or two or twenty.)