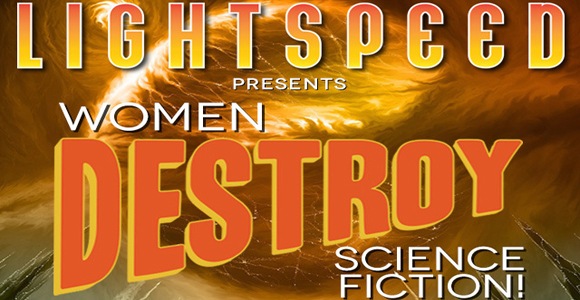 In June 2014, Lightspeed magazine will be doing an oversized  issue that’s entirely written and edited by women titled “Women Destroy Science Fiction!” They even have a Kickstarter campaign going to help fund the issue where you can get things like posters and subscriptions. An easy response would be to write this off as some sort of pandering, given that a lot of times projects like this are done to quiet down the disgruntled women-folk without having to hire them regularly. However, there’s more to this project and this publisher than just a simple feature on women.

Sci-fi, like comics and video games and any number of other industries where white dudes do much of the creating and controlling, often forgets its female creators beyond the most famous and suffers from a number of harassment and sexism issues. In this piece from The Guardian, writer Damien Walter points out that only 4 of the 29 Grandmasters of Science Fiction are female and that publisher Tor only gets 32% of its submissions from women. He also points out:

In her Guest of Honour speech at the Continuum convention NK Jemisin, one of the rising stars of contemporary SF, reiterated that the problems of both sexism and racism are not just about the 10% who are actively bigoted, but the larger group who empower racism and sexism through silence. Too many fans and professionals in SF and geek culture stay silent in the face of implicit racism and sexism.

The consequences are that talented women writers like Tricia Sullivan struggle to get published, while mediocre male writers continue their careers because we carry on buying their books. We demand a Doctor Who that isn’t a White British Male, but continue to laud the television show when we are ignored.

My initial thought upon hearing about this Kickstarter was why aren’t these female creators already being featured?  Unlike Womanthology, which was a standalone project, this magazine is already in existence – certainly they can just hire more women regularly? The interesting thing about Lightspeed, though, is that they do feature a lot of women.  A quick look through their website shows a lot of female creators in the January 2014 issue, in the previous issues, and on their “authors” page. In fact, there’s a near even gender parity in their issues which is unusual for any magazine, much less a sci-fi magazine.  So why would a magazine that’s already including women do a special issue? The Kickstarter explains:

This is no mere pandering – Lightspeed is putting their money (well, your money, too, if you’ll give it) where their mouth is.  As an added bonus, if you are a woman who writes sci-fi, they are accepting submissions until February 14th that will not just be considered for the Women Destroy Science Fiction! special issue, but also for regular Lightspeed issues. Whether you’re submitting or not, though, this project and Lightspeed‘s mission in general seems to be one worth supporting.