Barnes & Noble’s Next Nook May Run Windows 8, Come Out Next Month 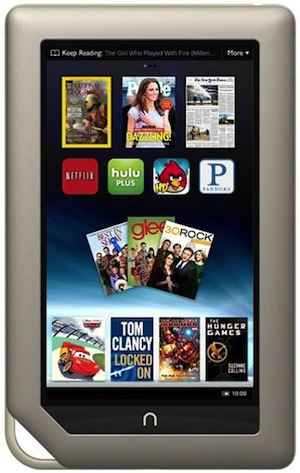 Not wanting to be outdone by Amazon’s fleet of new Kindles, it sounds like Barnes & Noble will strike out in a new direction with their next generation of Nook tablets. According to Digital Trends, B&N plans to announce a new Windows 8-powered Nook at the end of September, which will likely launch alongside the new operating system in late October.

The idea of a next-gen Nook isn’t particularly amazing: The line is due for a refresh, and prices for the current Nook lineup dropped last month, paving the way for a new premium model. More importantly, this isn’t the first time that rumors of a Windows 8-powered Nook have popped up. In the days leading up to Microsoft’s announcement of their own tablet, the Surface, rumors spread that the Windows-makers had partnered with Barnes & Noble to make the Nook into a pseudo first-party tablet. As it turns out, those rumors were clearly false, but the idea had to come from somewhere, right?

Just like the pre-Surface murmurings in the Spring, the new Windows 8 Nook is still a thoroughly unproven rumor. Still, the timing seems right and moving to Windows 8 would certainly be a bold move for Barnes & Noble, so we’re keeping our fingers crossed for this one.