Is it just me, or does the castle itself look like something out of a Terry Gilliam movie? Just me? Okay. 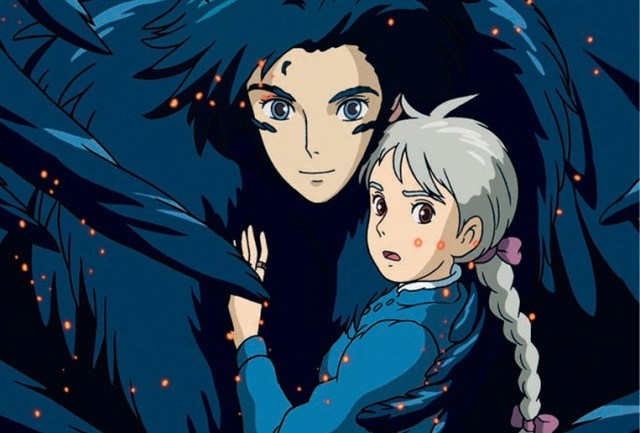 If you haven’t seen Howl’s Moving Castle by Studio Ghibli, you’ve really been missing out. Luckily, you can solve that here and now with the most definitive home release yet. Sporting both DVD and Blu-ray with a list price of $39.99, the combo pack for the film dropped on May 21st, and it’s the first time the film’s been made available on Blu-ray. Even if you’ve seen the movie a million times before, it’s worth seeing it one more time just for that.

How good does it look on Blu-ray? Ridiculously good, that’s how good. All the colors are crisp and the drawings are incredibly defined. There’s not a lot of gorgeous animals to animate in Howl’s, as opposed to Ponyo, but there’s a decent number of magic tidbits here and there that really pop. The film’s only problem here is that the narrative only allows for so many, well, spectacles.

The movie, of course, is great. It’s been out for quite some time on other formats, so I won’t review the actual film here, but the story of Howl and Sophie and Markl and Calcifer is just as wondrous as the first time I saw it. The Blu-ray supports both subs and dubs, because of course it does, so you can watch it however you please. Fans of Christian Bale likely love the dub while purists will always prefer the sub. It’s just the way of the world.

The special features are thin, though I’m hard-pressed to think of what I would have preferred. This tends to be the case when a foreign film, anime or otherwise, is released in the U.S., so it’s no surprise. The selling point is the movie itself in the best definition yet, and it’s hard to be more persuasive than that. Howl’s Moving Castle is no Princess Mononoke or Spirited Away, but it’s probably third for me.

That’s kind of where I’m at, having watched the movie again and explored the Blu-ray’s features. It’s good, and definitely worth having in your collection, but it’s probably not worth dropping $40 just to have the best definition available. If you’ve never seen Howl’s Moving Castle, and really want to own it, or you’re a big Ghibli fan, this is probably the best offer for your money.

In short: Buy it if you’re a big fan, or want the best experience, but if you’re just looking to round out your collection, it’s likely worth waiting for the inevitable drop in price.