“Kirk Got Redpilled”: William Shatner Lashes out At “SJWs” And “Snowflakes” in Twitter Attacks 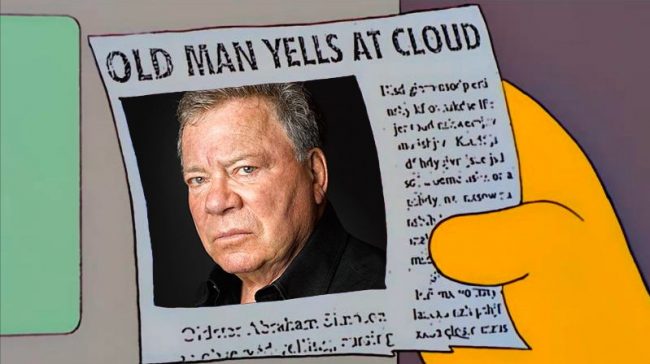 William Shatner’s troubling behavior online is hardly new. But the actor recently caught the attention of Twitter at large when he used the ad hominem attack language of the alt-right in response to a fan. The fan was trying to remind him that he was part of an extremely progressive television show in the ’60s that would have been lambasted by the “anti-SJW” crowd, had they been around then and had 4chan. William Shatner should probably log off for a while.

And this is your failure of logic. SJWs stand for inequality, where they are superior to any one else hence my use of Misandry and Snowflake https://t.co/8uBGuFFM7a

Although Shatner, who is 86 years old, claims in his bio to “not be political,” he seems to go out of his way to engage and antagonize on Twitter, while simultaneously claiming that he is a victim and blocking users (including The Mary Sue).

Arguments and blocking are well within his rights—but Shatner, who holds an important pop culture legacy for playing the original Captain James T. Kirk in Star Trek, doesn’t seem to know or care that he is employing the dismissive vocabulary and outright lies of the alt-right as he derides “social justice warriors,” “snowflakes,” and cries “misandry” when people—especially female people—disagree with him.

It’s disconcerting to witness an 86-year-old man you grew up adoring insult teenage “shippers” on the Internet because he can’t seem to wrap his mind around their motivation and doesn’t feel like trying. It’s even worse and weirder when he doesn’t seem able to recognize that he was part of a trailblazing media phenomenon that was and continues to be under fire by the “anti” mentality that he aligns himself with. It’s a strange time to be alive.

Here at The Mary Sue, we’ve covered Shatner’s antics in depth before. In what feels like a badge of honor at this point, he’s blocked the official Mary Sue Twitter account. He’s been decrying “social justice warriors” since at least 2016, and, like many of the alt-righters whose philosophy he is espousing, appears to enjoy responding with straw men attacks about misandry and snowflakes while refusing to engage with the real issues and people at hand. It would be ironic that someone who rails against “snowflakes” is also so thin-skinned and unable to grapple with the nuances of ideas and changing cultural norms, but this is also, by now, an expected pattern from Red Pillers and their ilk.

Shatner doesn’t just dismiss and lash out at younger fan groups, though he does spend a disturbing amount of time doing that. After several prominent genre authors came out against Shatner’s behavior, he wondered if it was an organized campaign of harassment on the part of Star Wars-oriented writers (because they hate Star Trek? Or something?). Which would be hilarious if it wasn’t so sad and infuriating.

Wonder if @WaltDisneyCo & @starwars knows about their book authors banding together to harass? Funny there’s a bio pattern s-t-a-r-w-a-r-s pic.twitter.com/yUBN8qYUXR

Last night, a greater portion of Twitter than usually pays attention to Shatner’s squabbles caught wind of what was happening, and the responses were quite glorious. People wouldn’t stand for his language—or his dismissal of the very real social justice space the original Star Trek carved out.

Live long & accuse powerless ppl of being superior as they continue the fight for human rights. You’re a class act Snowflake. https://t.co/pA7rQB7Ymx

Why is a 90 year old man tweeting about “SJWs?” He should be talking about Jackie Gleason and how good root beer used to taste.

Why is it that SJW’s think they can align themselves with those that demanded social reform in the 60’s? https://t.co/6CRVzawgLG

No wonder Nimoy wouldn’t talk to you before he died

If today’s anti-SJW crowd had been around in the 60’s, they’d have boycotted Trek for having a multinational crew and an interracial kiss.

Okay, who had ‘William Shatner Is Alt Right Now’?

I could go on with these fabulous responses forever, because Twitter really took Shatner to task. Unfortunately, it probably won’t make a difference. Shatner is so entrenched in his skewed ideology he’ll likely view this avalanche of criticism as further evidence that the “SJWs” are just frothing at the mouth and, I don’t know, summoning our demon armies to go after him. He’s already spent the last several hours responding to people with eyerolling emojis and retweeting messages of support. It’s pretty clear nothing at this point will deflect Shatner from his Warp 10-speed course toward becoming one of the most disappointing famous voices on the Internet.

Of course, actors are not their characters. William Shatner simply played James T. Kirk on TV and in the movies. But that character—and by extension, the man whose face he wore—means something to a whole lot of us. So while it would be unreasonable to expect Shatner to be Kirk-like, it’s not unreasonable to expect a beloved veteran actor not to attack and disparage his fans.

Instead, he appears to relish the fights—perhaps the only Kirk-like thing about him—and enjoy the attention he generates by upsetting people. This is the behavior of a troll. It should be beneath Shatner, but I suppose he’s not receiving much attention otherwise. You, sir, are no kind of space grandpa that anyone would want to claim—as far a cry away from Leonard Nimoy as can be imagined.

In reaction to Nimoy’s death, choking back tears, I wrote:

He was much more than Spock. He was a vibrant, hugely productive artist, a poet and a director and a music-maker and a sensitive photographer of nontraditional subjects. On Twitter he was winking and wise and warm. He was the kind of grandpa kids dream about having, and adults too.

Maybe that’s Shatner’s hang-up. He’ll never be more than Kirk, and he’s known and mocked for his acting style in the same breath. He’s contributed nothing substantial to the world beyond playing a character whose ideals he now appears to be in direct opposition with. His last gasp of relevancy is trolling kids on Twitter who joyfully live in a more socially progressive time than his retrograde brain can process.

As someone who deeply loves Captain Kirk, Shatner’s behavior makes me angry and sad. And while part of me wants to give him the benefit of the doubt of his advanced age, Shatner has been told, thousands of times now, where he’s in the wrong. Instead, he’s absorbed the value sets of the worst sort of people, and he seems content to remain an old man yelling at a Dikironium cloud creature while the rest of us beam on up.