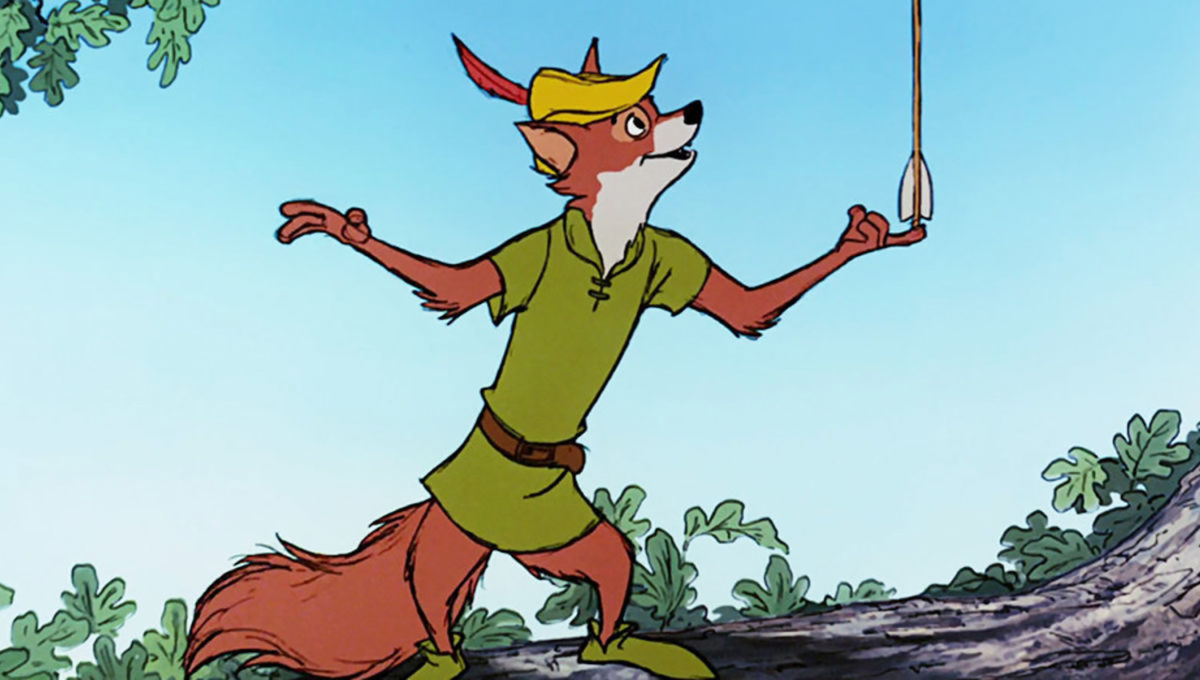 As Disney continues to mine its animated classics for live-action remakes, they’ve landed on 1973’s Robin Hood as the next in line for a modernized treatment. The beloved Disney musical featured an animated cast of anthropomorphic animals, with Robin Hood portrayed a a fox, Little John as a bear, and the sheriff of Nottingham as a wolf, etc.

Robin Hood belongs to Disney’s “lost generation” era, known as the period between Walt Disney’s death in 1966 and the Disney renaissance which began with 1989’s The Little Mermaid. The time period includes beloved outliers like The Aristocats, The Fox and The Hound, and Oliver & Company, to name a few.

The remake will be written by Kari Granlund, who scripted Disney+s’ Lady and the Tramp live-action remake with trained animals. Carlos Lopez Estrada (Blindspotting) will direct the feature, is set to premiere on Disney+ as well. Unlike Lady and the Tramp, the new Robin Hood will be a live-action/CG hybrid format, with the anthropomorphic cast retaining their animal/human hybrid looks.

Let’s not mince words: foxy Robin Hood (voiced by Brian Bedford) could GET. IT. But will the character’s uncanny sex appeal translate in a CGI/live-action version, or will it confuse our genitals even further?

Many took to Twitter to wonder if they’d still have a crush on this new CGI/live-action version of Robin Hood or whether or not this new creation would be the stuff of nightmares:

I don't know why everyone's so worried about live action Robin Hood I'm sure nothing could go wrong with it. 🙃 pic.twitter.com/8Xh6fqs7bo

sorry in advance but no human person will be as hot as animated fox Robin Hood https://t.co/bijVIQ5jF4

Disney has announced yet another live-action remake this time of Robin Hood. I'm sorry, not only am I against this since I don't like these remakes but how is that gonna work if the characters in that version are anthropomorphic animals? Did Hollywood learn anything from Cats? pic.twitter.com/RfX2mi96Yl

is everyone ready for the Butthole Cut of Disney's Robin Hood https://t.co/RlYACYh7rm

given that the moral of robin hood is essentially eat the rich i will allow it https://t.co/71tUFOtfC9

This may be the most serious question I've ever asked on Twitter:
What real life man is sexy enough to play Disney Fox Robin Hood? (Bonus points if you include a photo to defend your choice.) https://t.co/0qiSzr43SE

Finally, the story of Robin Hood will be told in live action. https://t.co/vyr26aQLMf

CONFIRMED: Nick Wilde will be the leading role of the new Robin Hood remake on Disney+ because well, he is the original star's only son#DisTwitter pic.twitter.com/Kh3PdIFtgU

What do you think? Will a CGI/live-action Robin Hood be a disaster? Is it possible to improve on the dreamy perfection that is 1973 fox Robin Hood? And how long will it take for audiences to clamor for the inevitable butthole cut?