Will Pretty Seesmic Look Push Twitter Over The Hump? 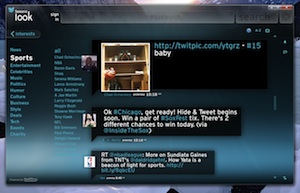 Yesterday, Seesmic sent ripples through the ripple-prone pond that is Twitter by rolling out Seesmic Look, a slick, pretty-looking app that aspires to bring Twitter to the masses.

Even if you do not consider yourself ‘the masses,’ you can download the app at Seesmic’s website, which proclaims that  “Beginners learning to understand real-time can stay engaged and connected without even logging into Twitter, while experienced users can take advantage of Look’s powerful features in creative and imaginative ways.” According to TechCrunch, there’s a clear overture to “the Oprah crowd.”

Whether or not Seesmic Look itself proves to be the killer app, will more visual, less texty dashboards push Twitter over the hump and into the mainstream?

‘The hump’ being that innovation adoption curve that your friend who considers himself an ‘early adopter’ no doubt brings up to justify his cracklike gadget consumption: 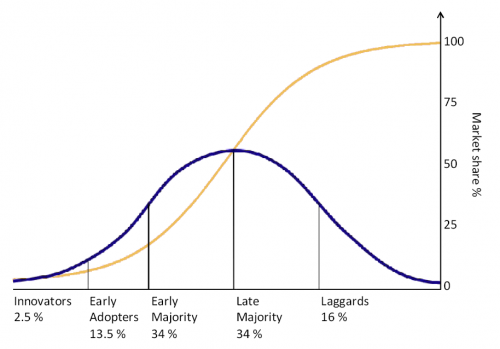 Twitter, for its part, seems to hope so. According to VentureBeat, Seesmic sees the new dashboard as much more appealing to advertisers than some wonky stream of text, and Twitter had an unusually active hand in Seesmic’s development, so, connect the dots:

…Twitter was also involved in the product design and technical aspects, with Look including a “Powered by Twitter”banner on the lower left corner of the application. A broad departure from previous iterations of Seesmic, Look’s interface and content channels reduce the clutter and makes it easy for users to browse content, including prominently placed content created by brand advertisers.

Twitter’s direct involvement in Look’s creation speaks to Twitter’s focus on expanding its userbase to the masses and creating for brand marketers to reach these users. With Twitter’s growth slowing to about 3.5% per month, Look is an attempt by both Twitter and Seesmic to allow people to pull in passive consumers and make them active. Look doesn’t require a Twitter account and can be utilized via desktop, tablet computer and the TV. Founder Loic Le Meur indicated that previous Twitter clients were too complicated for widespread adoption. “We started to think with Microsoft a good number of months that these products aren’t right for people on the street, people watching CNN… ‘normal people’.”