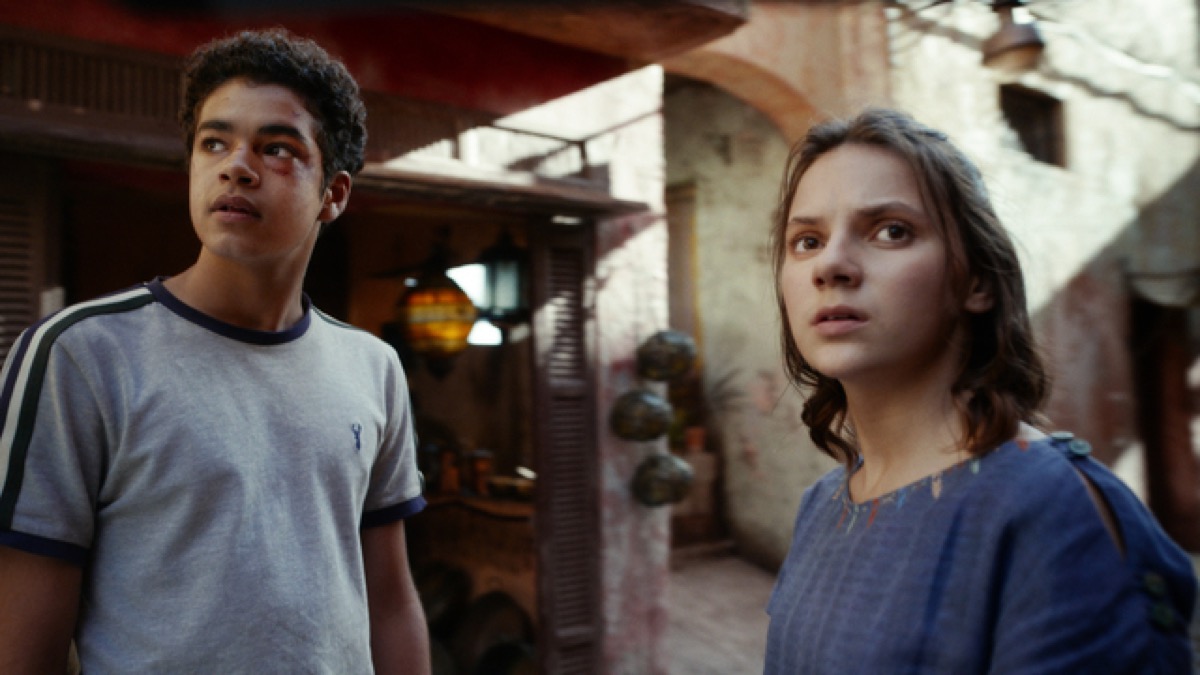 I’m not ashamed to admit that a good old-fashioned OTP can take a series I’m already enjoying up several notches—even all the way up to eleven—and that’s exactly what HBO’s His Dark Materials is doing in the second season now that Lyra and Will have met. If you’ve read Phillip Pullman’s books, you already know, but it’s not a spoiler if you’ve seen the first episode of season 2 that a slow burn teen romance is brewing. They are literally each other’s destiny, and besides that, they’re so stinking cute!

Give me couples that have a meet-fierce rather than a meet-cute. Lyra slams Will on the ground and insists that she scared him, not the other way around. I had to laugh. Scrappy Lyra is the best Lyra. Give me more boys like Will who are happy to drink the Respect Women juice. A lesser adaptation would have watered Lyra down or made her a stereotypical tomboy. I can’t get enough of how much Lyra’s daemon Pan, the embodiment of her soul, trusts and loves Will way before she realizes that she does. Give me more YA ‘ships about teamwork, playing to one another’s strengths, and bonding over common ground.

The way the two of them light up when they discussing what different things are called in their respective parallel worlds is almost perfectly executed. (I say “almost” because in the book The Subtle Knife, Will and Lyra realize at the same time that ambaric and electrum in Lyra’s world are not just different words for electric and amber, they’re homophones. The show cut that scene short right before they jinx, and I would’ve liked to see it.)

They’re immediately comfortable with each other and know how to work together. They corner Lady Mormont from Game of Thrones and her gal pal in Cittàgazze just using instinct. They’re pure, but don’t mess with them. You know? Lyra learns that Will is a murderer at the end of the episode and is 100 percent chill with it. Give me more of that energy, please!

Above all, Will makes her breakfast—does it get any more adorable than that? All I want in life is for someone to make me an omelette, and I don’t even eat breakfast eggs. Both of these kids have had to grow up fast and learn how to take care of themselves for different reasons, and they come into each other’s lives at exactly the right time. Amir Wilson already has “the look” down, too, and if he doesn’t continue down the romantic comedy path as he gets older, I’ll scream. He’s already booked my passage on this ‘ship with a few little smiles. All aboard!

There’s just one more thing to say about the way Will and Lyra’s relationship has been set up on HBO’s His Dark Materials … but it requires vague (however major) SPOILERS for those who haven’t read both The Subtle Knife and The Amber Spyglass, so BEWARE:

Look, the bench! The bench! It’s Will and Lyra’s bench! I love that the series is planting these little details and setting up the endgame already in the second season, but at what heartbreaking cost?! How could they do this to our emotions already? How am I supposed to act chill and casual and react to this bench without giving away the ending to this series to those who haven’t read the books first? I’m distraught.