Cheetah Robot Now Capable Of Running On Its Own, Humanity Even More Doomed | The Mary Sue

Cheetah Robot Now Capable Of Running On Its Own, Humanity Even More Doomed

Where's John Connor when you need him? 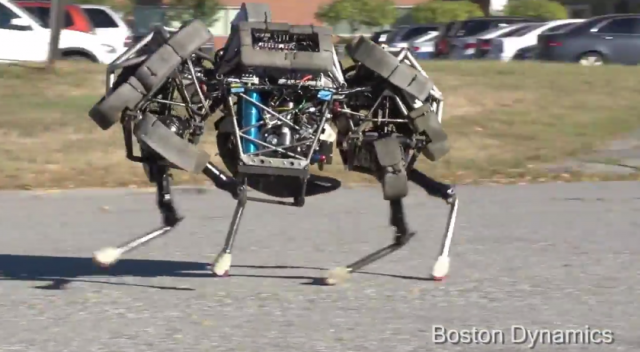 When last we saw the DARPA-funded “Cheetah” bot, it had just broken the world record for fastest robot with a 28.3 mph running speed. It was also pretty much stuck in one place at the time, which was comforting. Now Boston Dynamics has released video of “Wildcat”, which is able to spring on its own without any assistance. Yeah, this will haunt our dreams tonight.

WildCat clocks in at about an 16 mph speed across flat terrain. That doesn’t sound very fast until you remember that the average human long distance running speed is about 5 to 8 mph. Yeah, if that robot wants to destroy you, it’s not going to have much a problem doing so. You’ll hear the awful and terrible buzz of its motors in the distance and turn to see this galloping towards you, and by then it’ll be too late.

Just look at the way it hops in the beginning of the video. That is the hop of a cold, unfeeling monster from which no one will be safe.

(via EnGadget, images via Boston Dynamics)