Why You Should Be Watching HBO’s The Leftovers 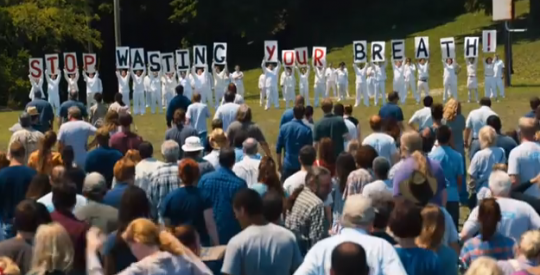 On December 10, HBO renewed its critically-acclaimed, but low-rated angst-fest, The Leftovers, for what it announced would be the third and final season. Despite favorable reviews, and an 89% fresh rating on Rotten Tomatoes, The Leftovers has struggled to find the audience it deserves. This is likely due in part to the fact that it shares its Sunday night time slot with that other end-of-the-world show, AMC’s ratings juggernaut, The Walking Dead.

For anyone who might have missed it, the premise, based on Tom Perotta’s 2011 novel of the same name, is unique: three years ago, on October 14, 2% of the world’s population vanished in an event known as the Sudden Departure. Unlike on its Sunday evening counterpart, civilization recovered, leaving those who were spared to carry on with their lives in the face of unimaginable loss. These “leftovers” struggle to make sense of a world where the people they love can be taken from them at any moment, joining cults, engaging in self-destructive, and at times dangerous behaviour, and doing their best to accept that they may never understand why this happened.

If that sounds intriguing to you, below are a few more reasons you should consider making The Leftovers your next binge-watching project. 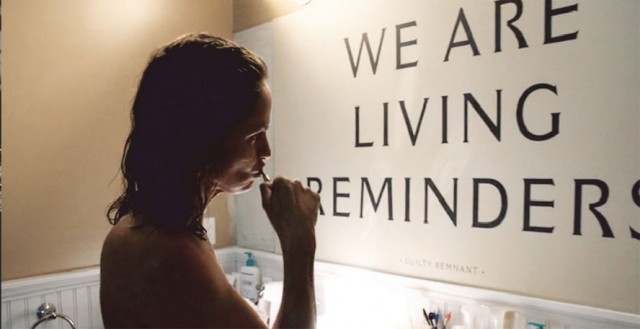 The Leftovers brings together one of the best ensembles on TV, from Hollywood A-listers like Liv Tyler and “Mr. Aniston” Justin Theroux, to lesser-known, but no less talented character actors like Ann Dowd and Marceline Hugot. Individual cast members are given opportunities to shine in spotlight episodes that allow viewers to experience the world of the show through their characters’ eyes—a device showrunner Damon Lindelof perfected on Lost, giving us classic episodes like “Walkabout” and “The ‘Constant.” For the most outstanding examples, see Christopher Eccleston’s episodes “Two Boats and a Helicopter” and “No Room at the Inn,” and the Nora-centric (Carrie Coon) season one outing, “Guest.”

Lindelof describes the aftermath of the Sudden Departure as an “existential apocalypse,” with both the spiritual and agnostic alike forced to re-examine their entire belief systems. Watching the show can be a cathartic experience, encouraging viewers to contemplate issues often glossed over on television like grief, pain, mortality, and the search for meaning in an uncertain world.

Events and actions on The Leftovers are often ambiguous, leaving viewers to formulate their own theories and conclusions. Lindelof has made no secret of the fact that he and Perotta aren’t interested in explaining the Sudden Departure. There’s nothing subliminal about the season two theme song, which asks viewers to “Let the Mystery Be.”

Say what you want about the ending of Lost, but Lindelof isn’t afraid to experiment, pushing the boundaries of what viewers can expect. Drawing inspiration from classic shows like Friday Night Lights and The Wire, season two sees the core cast shift to a new location, introducing new characters and a new central mystery.

From Max Richter’s haunting score to seminal hits like The Pixies’ “Where is My Mind,” music in The Leftovers is used to maximum effect, building tension and highlighting characters’ often tumultuous emotional states.

Just like the characters on The Leftovers, television viewers need closure. Anyone who has ever loved a series that was canceled too soon knows the frustration of investing time and emotion in the journey, only for it to be ripped away without a satisfying conclusion [obligatory Firefly mention goes here]. Fortunately, that won’t be the case with The Leftovers, with HBO granting Lindelof and co. a final season to tie up any loose threads.

Samara Rowling is a former bookseller and current librarian and independent author. You can follow her at her new speculative fiction blog, Crazy Genre Town, where she will no doubt continue to rave about under-appreciated genre shows like The Leftovers.