Star Trek: TNG at 30: Here’s Why Wesley Crusher Was Awesome, So You Just Shut Up.

"Now, you be sure to dress warmly on those other planes of existence." - Beverly Crusher 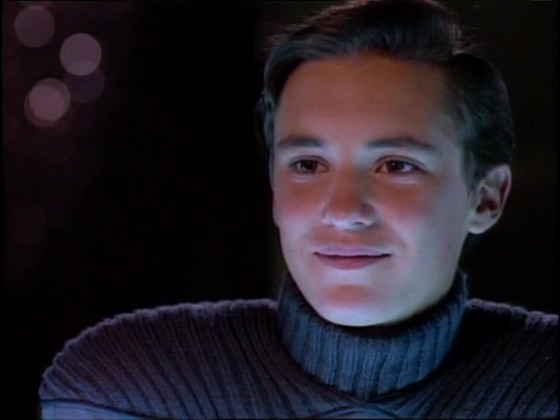 Everyone, from fans to Captain Jean-Luc Picard himself love to bag on Wesley Crusher. Well today, in celebration of Star Trek: The Next Generation‘s 30th anniversary (I’m so old), I want to pay homage to my favorite teen genius. Here’s a couple of reasons why Wesley Crusher was totally badass and wasn’t as annoying as everyone says, and I’m not just saying that because I had a huge crush on him shut up. 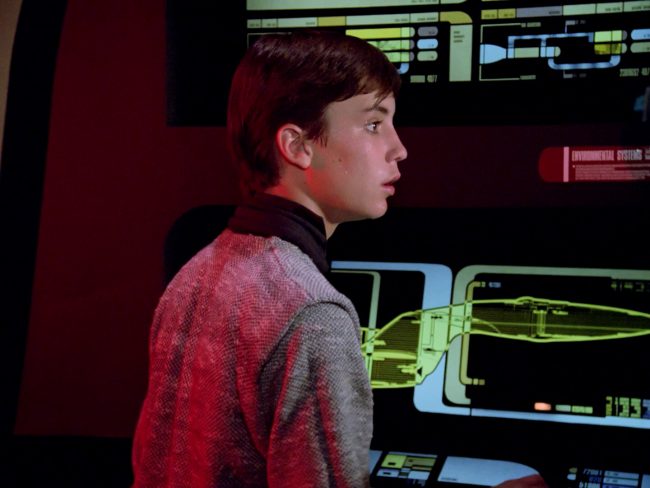 THAT TIME THAT HE TOOK, LIKE, FIVE MINUTES TO THINK OF HOW TO TURN A TRACTOR BEAM INTO A REPULSOR BEAM TO SAVE THE ENTERPRISE WHILE HE WAS DRUNK

And yet, even while under the influence, he’s such a genius that he’s able to figure out how to quickly turn the ship’s tractor beam into a repulsor beam when the adult Chief of Engineering tells him it would be too hard. He uses the repulsor beam to propel the disabled Enterprise away from another ship, narrowly avoiding the fragments of an exploding star that would’ve hit them. This is the kind of thing Wesley Crusher was capable of on a bad day. 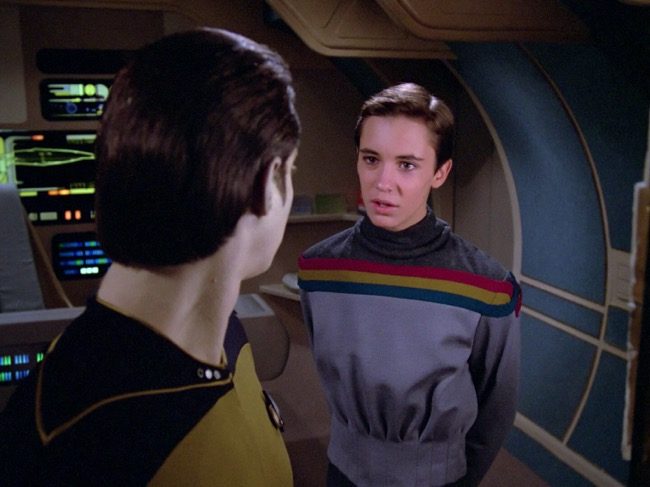 THAT’S NOT DATA, YOU GUYS!

In the episode “Datalore,” Wesley was the first person to figure out that Data wasn’t Data at all, but rather his eeeevil brother, Lore. This was the first time we actually hear the Captain say “Shut up, Wesley!” Which is a really douchey thing to say, especially when the kid was freaking right! I know why these people are so annoyed by Wesley. It’s because he’s smarter than they are, and they hate being constantly shown up by a teenager.

Whatevs, yo. Wesley was just biding his time… 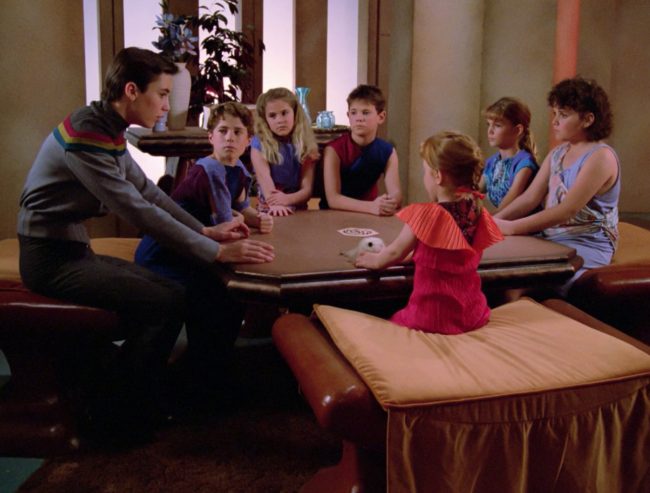 We’re constantly seeing Wesley being dismissed by the adults around him. So, it makes that he would lead the children in a revolution against adults. He and the other children on the Enterprise are taken by a race of beings called the Aldeans, whose civilization is dying out because they are all infertile. In the episode “When the Bough Breaks,” the Aldeans ask to trade the human kids for tech, and when the Enterprise says no, the kids are beamed off the ship anyway.

The Aldeans entertain the kids and slowly try to win their favor. Many of the kids are really young, and so they start to be swayed by the Aldeans’ kindness, but Wesley reminds them of who they are, and where their true home is. He teaches them how to passively resist by going on a hunger strike in an attempt to convince the Aldeans to send them back. So, Wesley’s not only a tech genius, but he’s a leader who believes in freedom and is capable of leading a revolution against oppression. Boom. 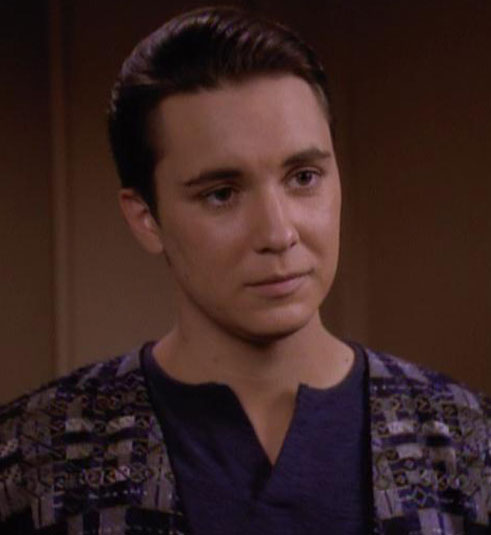 WESLEY IS SUCH A GENIUS THAT HIS LEGIT, ACTUAL DESTINY IN LIFE IS TO GO OFF AND EXPLORE THE UNIVERSE WITH AN INTERDIMENSONAL BEING (WHO IS MAYBE THE DOCTOR?) BECAUSE REGULAR HUMAN LIFE CANNOT HOLD HIM

In the episode “Where No One Has Gone Before,” the Enterprise has its first encounter with The Traveler, a guy from another plane of existence who is searching for people like Wesley. You see, Wesley is destined to be able to manipulate time, space, and thought, whaaaaaaat? In that episode, Picard is advised not to tell Wesley or his mother, Beverly, about this. Wesley needs to develop his talents on his own. Picard agrees, and then goes on to make Wesley an Acting Ensign with actual duties on the ship and whatnot, so that he can get practice on a ship and prepare for Starfleet Academy.

Eventually, Wesley enrolls in Starfleet Academy, but in his final episode, “Journey’s End,” he reveals that he’d had a vision of his dead father, who told him that his destiny rests outside of Starfleet and that he shouldn’t follow in his footsteps. Beverly, who’d since found out what the Traveler told Picard, now tells Wesley, confirming that rather than continue on the path to being a Starfleet officer, he should go be all he can be with The Traveler.

How badass an ending is that for the kid getting ignored all the time, because he was too smart? Peace out, normies. I’m leaving to go explore the universe and be a goddamn genius! 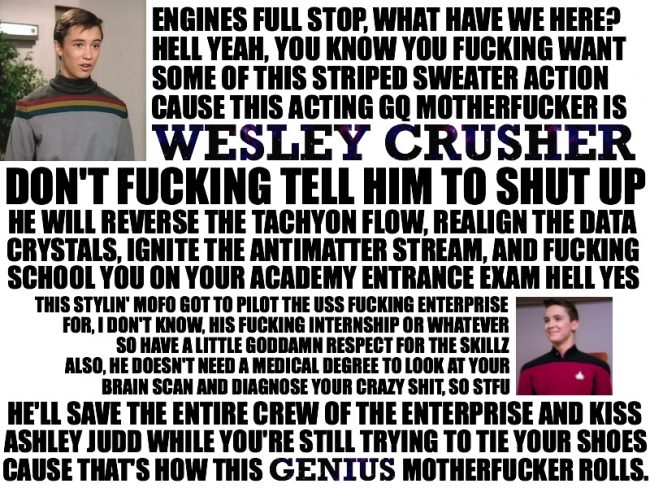 When Star Trek: The Next Generation premiered thirty years ago today, it was a huge success in large part because it was a show families could watch together. For nerdy, socially awkward kids like me, Wesley Crusher was the way in. Not only was he dreamy (PS – he was totally dreamy, you guys. Eight-year-old-me was smitten with that rainbow-sweater-wearing god of a boy), but he was someone I could relate to.

Wesley, like me, was ignored because he was the youngest, despite the fact that he was really smart and often had the answers or insights the adults around him were missing. Like me, Wesley often felt trapped: too young to have agency, but too smart to be contained for very long. Sometimes he was too smart for his own good, and it got him into trouble.  Yeah, I felt him there, too.

So, next time you think that Wesley Crusher is “annoying,” think about the legit badassery in which he engaged while on the ship, so much so that he even earned the respect of Captain Picard, who notoriously hated children. Then, think about what Wesley Crusher meant to all the smart and lonely kids out there watching, and hoping against hope that a Traveler would come along and tell them that their destiny lay in another dimension.

Oh, and in my headcanon, the Traveler was totally The Doctor making a special guest appearance.