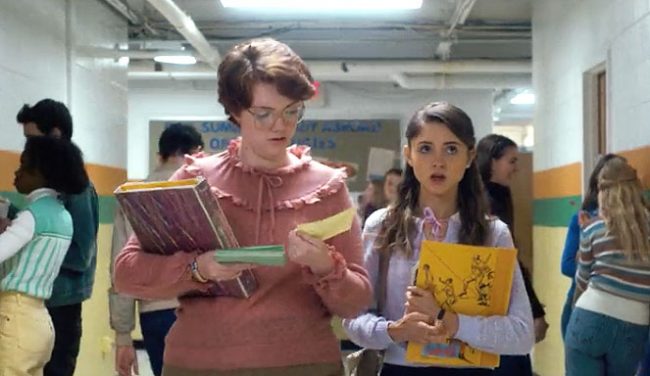 Stranger Things S2 arrives tomorrow, and I’m totally excited! I can’t wait to get back to my girl Eleven. Also there are some young dudes who are pretty cool. Oh, and Joyce, one of the most nuanced television moms ever! Oh, and Nancy, my favorite low-key badass who was a surprise fave for me Season 1. You know who I’m glad isn’t coming back? Barb. And no, I don’t even care if she gets justice.

I know, I know. So many people love Barb. They love her because they can relate to her. She “reminds us of ourselves.” See, she reminds me of myself, too. Except she reminds me of the parts of myself that I’m glad are gone, and so I’m glad that she’s gone with them.

People tend to stick to a narrow Barb/Nancy dichotomy when talking about their Barb feelings: 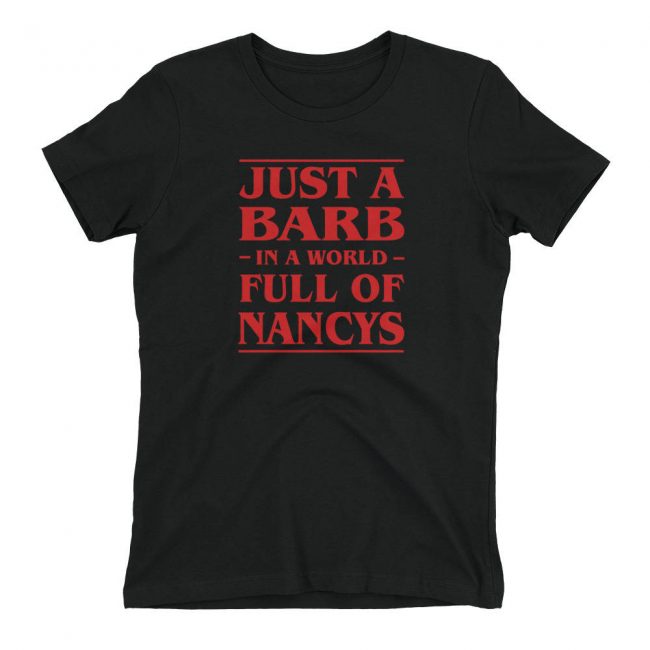 To most people, Barb represents the average, nerdy girl, whereas Nancy represents the nerdy girl “gone cool,” which is absolutely the worst thing to be. God forbid you, you know, change at all as a human, or make new friends, or develop new interests. And yet, from the moment she’s introduced, Barb is trying not only to ensure that Nancy will always be her friend, but to ensure that Nancy will never change and will always share her values.

This is why it bugs me when Barb is framed as being such a “good friend.” She was actually the worst friend. She was a jealous, slut-shaming, terrible friend. And no one twisted her arm to come to the damn party, and no one told her to stick around the pool even after Nancy clearly said she could go home.

In the first episode of Season 1, Barb wants to hear all about whether or not Steve has called Nancy. She knows that Nancy and Steve have made out before, and at first she seems excited for her friend’s prospects. Then, she makes Nancy’s love life about the high school hierarchy and her place in it. She cautions Nancy not to make friends with Steve’s friends and insinuates that Nancy will probably go off and be cool and leave her behind.

So, in our first scene with Barb, already we know that she’s tied more into her own insecurity than she is into genuinely caring about her friend’s life. She makes Nancy’s choices about her.

In Buzzfeed’s “25 Times Barb From Stranger Things Was All of Us” post, Barb’s helping Nancy to study as they walk down the hall was a sign of her “being a good friend.” Is it, though? Or was it a way for her to make Nancy feel like she “needed” her. Nancy’s clearly smart. She knows how to study. She doesn’t need “help” studying.

The girls run into Steve and his friends, and they invite Nancy to a party at Steve’s house. As Nancy is deciding whether or not to go, Barb is being the ultimate wet blanket, pooh-poohing everything. Not only does she not want to go, but she wants Nancy to not want to go. Again, it’s all about her and what she thinks is right.

In that scene, we also get the first glimpse of one of the things I love so much about Nancy. Of all those kids, Nancy is the only one to go up to Jonathan as he hangs “Missing” posters up at school for his brother to offer her support. She’s even gracious enough to include the other kids in the group, saying that “we’re all thinking about you,” even though they could care less. Nancy is not only genuinely kind, but she puts kindness ahead of “talking to the popular kids.” She even tries to encourage them to do the nice thing, and when they don’t, she does it alone.

And does Barb at least go over there with her? No. 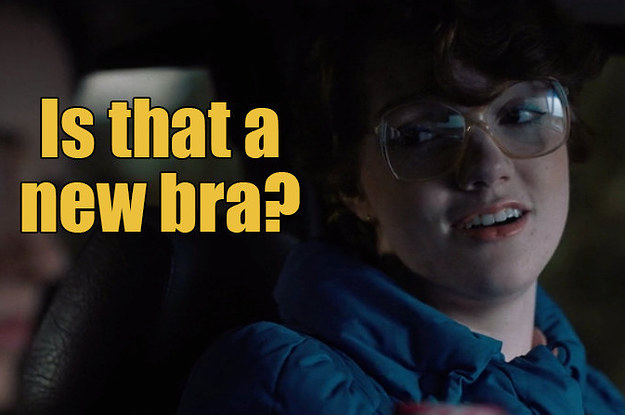 Later, Barb is driving Nancy to Steve’s party, and apparently, she’s agreed to go with Nancy, though you wouldn’t know it from the way that Barb is being all judgy-pants about every damn thing. Nancy asks her to stop a few blocks away from Steve’s, because she doesn’t want to park the car in the driveway in case the neighbors see.

Is that a bit paranoid? Sure. But it’s also understandable. She knows that Steve’s not supposed to be having people over like this, and she’s trying to mitigate any fallout. Barb, however, rolls her eyes as if that’s the most inane suggestion she’s ever heard. More inane than agreeing to come to a party in the first place that you’re only going to grumble your entire way through, BARB?

When Barb suggests that she should just drop Nancy off and leave, my first thought was “YEEEEESSSS! Please just go away and let Nancy enjoy this.” But then Nancy convinces her to stay and come with her.

Everyone, including Barb, has always projected a certain persona on Nancy. She’s the smart girl. She’s the “good girl.” She’s the girl who doesn’t get into “trouble.” And she’s certainly owned some of that persona. However, as teenagers are wont to do, Nancy is changing. She’s bold enough to want to try something new, but still nervous enough about it that she wants her best friend there with her.

A true friend would encourage their friend to be themselves and to pursue what makes them happy. Instead, Barb wants her to be the Nancy she knows forever.

She talks to Nancy as if she’s naive about what Steve wants. Nancy isn’t naive at this moment. She knows exactly what Steve wants, and *gasp* she wants it, too! However, because of this Nancy “persona”, she’s been relegated to, acknowledging what she wants is difficult. So, she puts up a front, insists that’s not what Steve is calling her there for.

And YES SHE DID BUY A NEW BRA. SHE BOUGHT A NEW BRA, BECAUSE SHE KNEW THAT STEVE WAS GONNA SEE IT AT SOME POINT. If she was truly as naive as Barb seems to think, she’d be going over there in granny panties.

Nancy appeals to Barb’s “guardian” side in the hopes that she’ll stay, because she wants some support through a big change, and Barb is being horrible and thinking about herself and her own discomfort, not recognizing the fact that her friend has basically asked her to be there for her through a major life milestone. She’s going over there to lose her virginity, and she wants a friend, not a nagging mom. 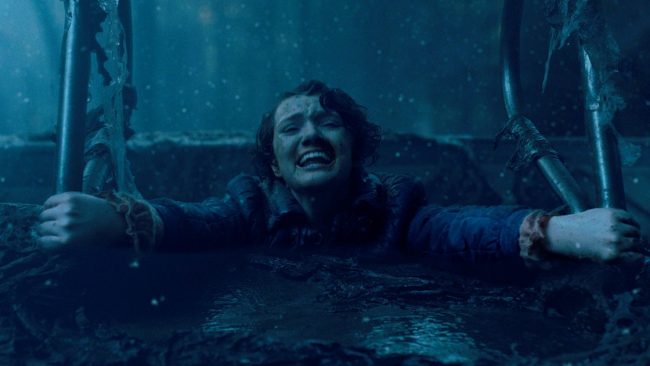 And then the party, which seems like a pretty chill, low-key evening. Everyone’s just chatting. No one is doing anything particularly obnoxious, and yet there’s Barb: sitting there like a sulking lump refusing to make any kind of effort. Seriously, though, why did you agree to come if this is how you’re gonna be?

When Steve challenges Nancy to drink, Nancy shotguns a beer with gusto, knowing how to do it. Barb, of course, acts as though Nancy is the worst degenerate to ever degenerate. Nancy then asks if Barb wants to try. Now, I’ll admit that this was not a cool move on Nancy’s part. Barb clearly wouldn’t want to try, judging by her reaction to Nancy drinking.

However, literally, no one else there cared whether or not Barb drank or not, so there was no one there to impress. It’s not as if the group was pressuring her.

And while Nancy was pressuring her a bit (probably so that she wouldn’t be the lone outsider trying it), Nancy is someone that (I’m assuming) Barb has known and been best friends with forever. It’s one thing if the “cool kids” peer-pressure you and you feel like you can’t say no without looking bad…but this is Nancy. She could’ve put her foot down with Nancy, and it would’ve been okay.

OR, she could’ve bonded with Nancy by asking Nancy to show her how to shotgun the beer. Instead, she begrudgingly agrees to it, tries to do it herself, and slices her thumb open. 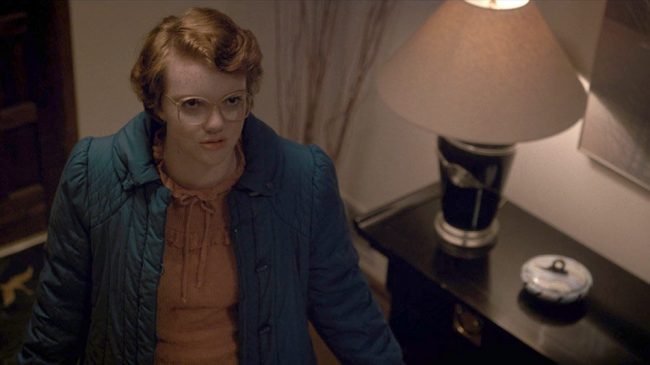 While she’s in the bathroom wrapping her injured thumb, the other four kids frolic in the pool. They come out and go inside the house to “dry off” and also have sex. As Barb observed earlier in the evening, “Tommy H. and Carol have been having sex since, like, seventh grade.” So, of course, they’re the first to go off to find a bedroom. Steve jokes that they’d better clean the sheets when they’re done…but then he offers to find Nancy something dry to wear.

When Nancy goes upstairs, she knows that she’s not just getting dry clothes. But when Barb sees her going up with Steve, she’s shocked. Shocked. And then, she said the thing that made me hate her forever. She said, “This isn’t you.” What? Having sex “isn’t her?”

There’s a certain amount of sadness in this. It hurts, sometimes, when people change and find themselves out of step when they used to be on the same page. Barb and Nancy are experiencing that in this moment. Nancy is becoming more confident in who she is and what she wants, while Barb is still a little immature, a little insecure. I totally get that.

But that doesn’t make me any less angry about the way she’s judging her friend right now. This isn’t you? Fuck off, Barb.

Then Nancy explicitly tells her that she can go home if she wants. She is absolutely fine, and she’s telling Barb this without the slightest hesitation or hint of nervousness. Yet Barb doesn’t go home. She sits around the pool like an asshole, probably thinking she’s being a “good friend” by making sure Nancy is okay, when really what she’s doing is trying to guilt-trip her friend for having the nerve to change.

Thankfully, she gets sucked into the Upside Down for her trouble. Peace out, “good friend.” 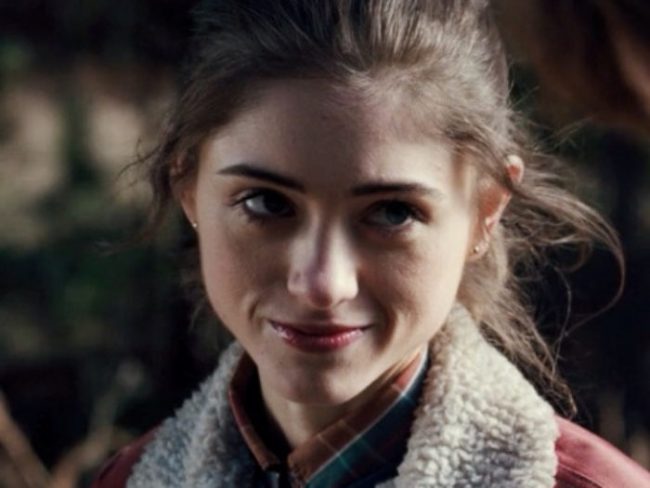 Nancy then goes on to confidently lose her virginity in a scene I really appreciated for the way it portrayed her agency and clear desire.

Throughout the rest of the series, Nancy goes on to act heroically, stand up for the underdog, and face down literal monsters. And, while it was a bit of a surprise that she ended up with Steve at the end of the first season (they were really working that Nancy/Jonathan angle hard), it doesn’t even matter. Whoever she ends up with, I’m here for Nancy. She’s kind, she’s brave, and she had a deep well of strength and confidence to draw from.

It might seem like I’m being overly hard on Barb, but perhaps I’m being so hard on her because she reminds me a lot of me. Back when I was a virginal, nerdy, awkward teenager, I wasn’t always a great person. I was picked on, for sure, but I also used that as an excuse to be really mean to and about people in a passive-aggressive way, because I felt like I deserved it.

After all, if I had to suffer at the hands of others, why couldn’t I make people suffer, too? Or at least reserve the right to be catty or judgy.

I’m glad Barb is gone because it seems as if Barb was the last thing keeping Nancy from fully growing up and coming into her own. Now that Barb is gone, Nancy is free to be herself. Whatever she decides that self is.

Really, I’m just glad that the girl who had sex didn’t die.