Whiskey in a Can | The Mary Sue

Whiskey in a Can 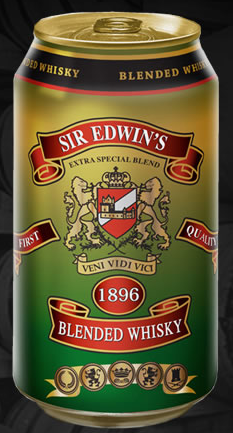 First the 31-ounce Starbucks coffee, now this: A Panamanian company called Scottish Spirits has dubiously made history by becoming the first company to sell straight whiskey in a can. (Jack Daniels sells a blended whiskey-and-cola drink in a can, which by comparison looks prim and proper.)

Why put twelve ounces, or eight shots, in one can? According to the people behind whiskey-in-a-can, it’s not for enabling vagrants or fueling debauched frat parties, but for saving the environment, of course:

‘The can is the perfect size to be shared between three people who can mix it with other things like cola.

‘It’s lightweight and portable and entirely recyclable, which is good news. It will be one of the hot picks for any outdoor activities.’

The Scotch Whisky Association is not too happy about this, primarily because it thinks that people might confuse the drink with authentic Scotch on account of the company’s name. Regular whiskey in a can, however, is apparently a-OK.