When the Dave’s Is Done: Some Thoughts on the Passing of a Comic Shop 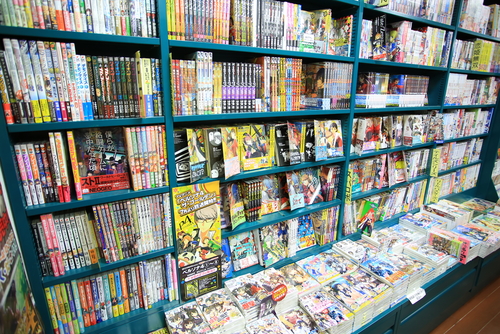 “Memory is curated. All this paraphernalia you collect to ward off forgetting.”

The Village Shopping Center in the suburbs of Richmond, Virginia, is a place where “was”-es live. When I was growing up in a house where I no longer live, I knew it for several institutions that aren’t there anymore either. There was a Blockbuster video and one of the locations of the Ukrop family’s eponymous grocery stores, which everyone in town swore by (except my family, who thought they were a bunch of cultish, WASPy pricks). The Blockbuster, needless to say, isn’t there anymore; Ukrop’s sold all its locations to the Ahold-Martin corporation in 2010, after which they rebranded as Giant stores. It’s just a few miles from the University of Richmond, the alma mater of my parents and both my mom’s parents who, like the stores, aren’t alive anymore. We spread my grandmother’s ashes on the university campus about six years ago. The Starbucks is still going strong, because it is, after all, the suburbs of Richmond.

One of the last holdouts of the Old Village (or to center it less narcissistically, the Village I grew up with) was one of the least likely, if I’d had to guess, even if it’s been there since 1982. Dave’s Comics was located at the end of a corridor that bisects the shopping center. Even if you’ve never been to a comic shop, you can probably get an idea of what my experience in Dave’s was like from any cultural depiction of the setting. The clientele was overwhelmingly male and largely, if not exclusively, adult. If you weren’t an adult one of the clerks would likely eye you over his glasses (I’m not stereotyping, they all had glasses) and ask if there was anything he could “help you with” if you hadn’t taken your purchase to the register within a few minutes. If that atmosphere didn’t keep kids out, you got the sense the prices were intended to.

And yet, growing up, I loved the place, especially for a few key years in middle and early high school. I wasn’t at my best socially during those years, and comics tended to be my escape, hardly a unique narrative but a comforting one regardless. Sure, the place could be weird, insular and niche, but at a time when I was all of those things too, that was what I needed.

Dave’s is gone now, or about to be. The store held its going-out-of-business sale over this past Fourth of July Weekend. I wasn’t there for it; I found out about it fairly late in the game and didn’t have time to make arrangements to visit Richmond for the weekend. The store outlasted Dave himself, who died in April after operating the store for about three decades. Coincidentally, its end came at a flashpoint in the discussion about who comics, and the broader, ill-defined “nerd culture” in general, are for.

Women and girls have, of course, always read comics; research published in 1945 at the height of the Golden Age found 91 percent of girls age 6 to 11 and 28 percent of adult women read them. But for whatever reason, over the years there’s been a lingering perception of women on the scene as simply renting the space. Hatred of the largely imaginary “Fake Geek Girl” persists even as comic-based movies (and similarly geeky properties such as Harry Potter and Game of Thrones) dominate box office receipts and popular culture, making them a perfectly normal thing for a person of any gender or race to enjoy. Dave’s Comics can hardly be blamed for that strain of resentful gatekeeping within the culture, but its demise comes right as the façade appears to finally be crumbling and, slowly but surely, geekdom is moving to reflect the diversity it’s always contained.

For example, Paulina Gamino owns Misfit Toys in Houston, the city’s first comic and toy shop owned by a Hispanic woman. Misfit has a customer base that’s about three-quarters minorities and 50 percent women, according to Gamino, and that’s no accident, as she’s worked to actively cultivate an inclusive space.

Increased interest in comics from customers outside the stereotypical middle-class white male profile has gotten a huge boost from the aforementioned TV and film adaptation boom, according to Gamino. They “act as a crash course for that character and storyline (even if they are not always accurate to the original storyline),” she told The Mary Sue. “With this newfound popularity, we get a more diverse group of people becoming interested in comics, especially in the melting pot that is Houston.” This comes as comic characters themselves are diversifying as well, with characters like plus-size heroine Faith and black, female Iron Man RiRi Williams dominating the buzz in mainstream news sources as well as among comics readers.

Misfit Toys also has a bilingual staff, making it ideally positioned for the increased diversity of both Houston itself and the comics market at large. “Sometimes it is easier [for customers] to express their interests and excitement when speaking in their native language. In fact, ‘Spanglish’ is regularly heard in the shop,” she said. The LGBTQ community also makes a strong showing in the shop, she added, because just like for everyone else, Misfit represents “a judgment-free zone for everyone to geek-out.”

I miss Dave’s. It helped shape me, for better or for worse, and it also nurtured parts of me that aren’t there anymore but weren’t ready to leave at the time. It may have been just a retail space but that’s still an important function to play in a young person’s life. But even with Dave’s gone, other people need that as well, and a lot of them don’t look like me. Fortunately, Gamino and people like her are quite literally making a living ensuring such spaces exist.

Zack Budryk is a Washington, DC-based journalist and the author of Judith, out October 11 from Inkshares. He blogs on Tumblr and tweets @ZackBudryk.