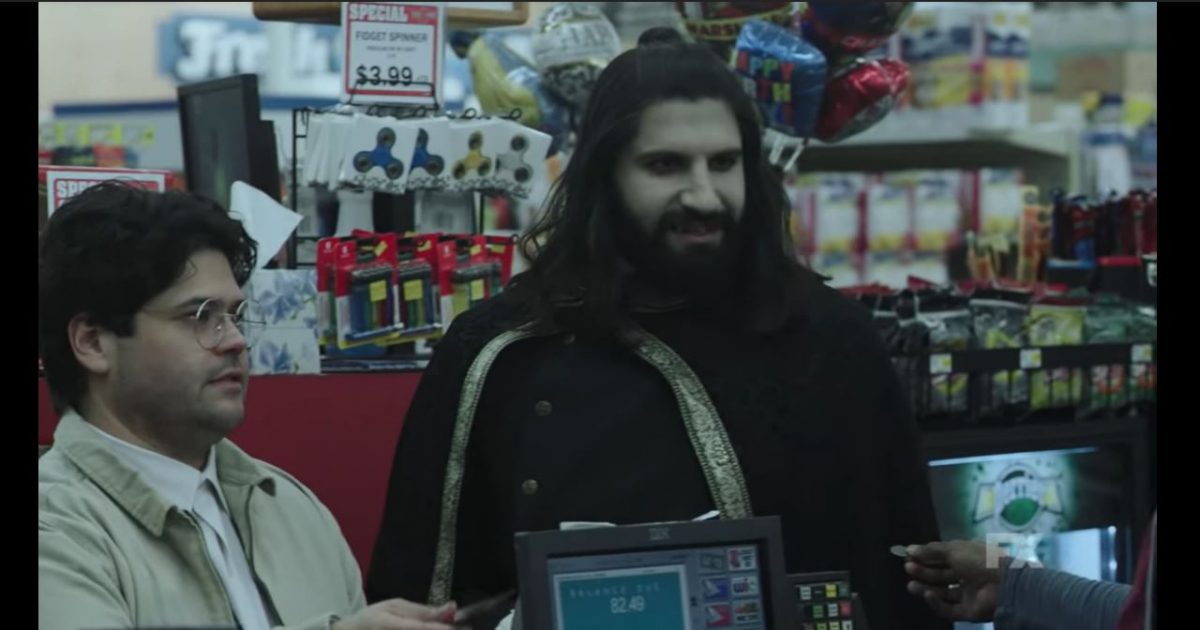 Ever since news of a What We Do in the Shadows spin-off broke, we’ve been eagerly anticipating the upcoming FX series. The cult classic 2014 film starred Jemaine Clement (Flight of the Conchords), Taika Waititi (Thor: Ragnarok) and Jonny Brugh (800 Words) as a trio of vampire roommates in Wellington, New Zealand. The FX series moves the location to New York City and features an all new cast of vampires sharing a home.

FX has dropped two brief teasers for the series, which appear to capture the silliness of the original film. The first clip features vampires Nandor (Four Lions‘s Kayvan Novak) and Laszlo (Toast of London‘s Matt Berry) and their servant Guillermo (The Magicians‘ Harvey Guillen) as they await the arrival of some virgins.

The second teaser shows Nandor and Guillermo at the super market, where Nandor tries to pay by chucking an old coin at the employee’s face. It doesn’t go over well.

The series also stars Natasia Demetriou (Year Friends) as female vamp Nadja. In addition to producing the series, Clement and Waititi have collaborated on a New Zealand-set series that takes place in the WWDITS universe, called Wellington Paranormal.

Wellington Paranormal is a mockumentary take on a reality cop show, which follows officers Minogue (Hunt for the Wilderpeople’s Mike Minogue) and O’Leary (The Breaker–Upperers‘ Karen O’Leary), beat cops who are now part of the paranormal investigation unit in the Wellington police force. Both actors are reprising their roles from the original film. Waititi and Clement will cameo in the series.

Hayden Szeto (Edge of Seventeen) who appears in the FX pilot said of the experience, “What I liked about it, is that there’s a wider variety of characters in this, compared to the movie, which makes it more interesting. The wider variety of characters causes more conflict on the show, and it’s really, really well done. Jemaine Celement, the writer, is a genius. I’m a big fan of Flight of the Conchords. There are many modern pop culture references that will make you laugh, so hard.”

FX hasn’t set a release date for series, only saying that it will come out sometime in the spring.