What Should Broadway's Stages Look Like? Ask BroadwayCon | The Mary Sue

What Should Diversity on Broadway’s Stages Look Like? Just Ask BroadwayCon 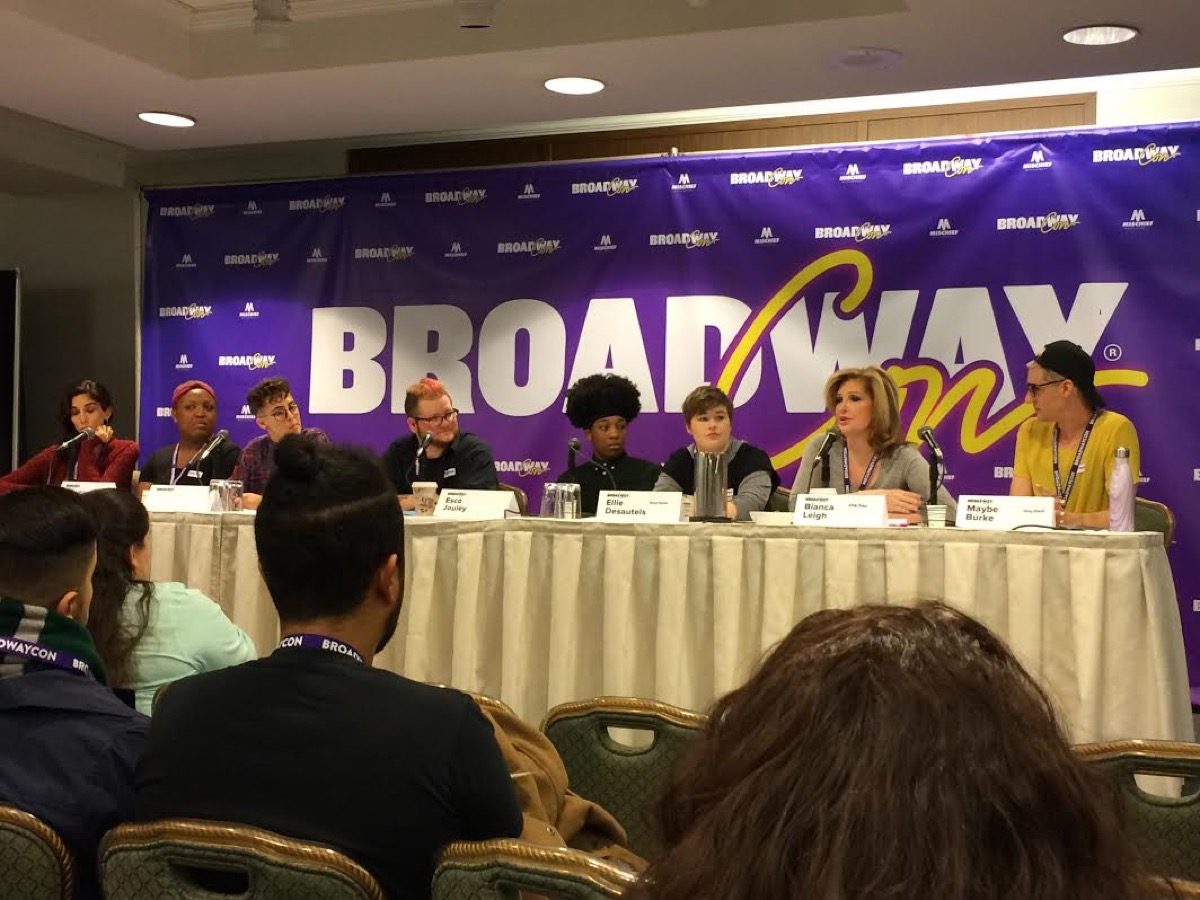 In 2016, when Lin-Manuel Miranda’s mega-hit “Hamilton” was busy sweeping the Tonys, ceremony host James Corden joked in his opening monologue, “Think of tonight as the Oscars, but with diversity.” It was the first year in the ceremony’s history that all four major musical acting awards went to actors of color (Cynthia Erivo for The Color Purple and Leslie Odom, Jr./Daveed Diggs/Renee Elise Goldsberry for Hamilton), and Broadway had reason to celebrate … for a minute.

There’s a thing that happens every year when the Oscar nominations come out; the best performances and creators are inevitably snubbed, and then the theatre world lights up to talk about its diverse stages, even though that is historically untrue. Since the Tonys began in 1947, 95 percent of its nominees have been white. Hamilton and the rest of 2015–2016’s diverse season was, as Miranda even said, “an accident of timing.”

So, if the Oscars are still so white and male, and if the Tonys are still the same, what hope do we have?

Enter not Broadway, but BroadwayCon.

BroadwayCon, which bills itself as “a convention where Broadway fans can come together to celebrate the shows they love with people who bring them to life,” was created in 2016 by Mischief Management chief executive Melissa Anelli and actor Anthony Rapp, who rose to stage fame as the original Mark Cohen in “Rent.” The three-day event (held this year January 11–13) is, in full, a love letter to theatre and its performers and, in part, a charity event, with 10 percent of the profits going to Broadway Cares/Equity Fights AIDS.

Held at the New York Hilton Midtown, BroadwayCon pulls in approximately 7,500 attendees over the course of three days, up from 6,000 last year—small for a con (approximately 65,000 for D23, 130,000+ for San Diego Comic-Con) but mighty for a Broadway audience, especially when you start to look around the room more closely, which, at first and all following glances, seems to be made up mostly of kids, teens, and young adults from all backgrounds and of all genders.

Compare this to Broadway itself: according to The Broadway League, of the 13.8 million admissions in the 2017–18 season, 2.1 million admissions were kids and teens. One quarter of all tickets were purchased by non-white theatre-goers. Sixty-six percent of the audience was female.

Broadway itself is growing in similar, but also different, ways. Just this season, Leigh Silverman formed the first all-female design team for her The Lifespan of a Fact, starring Daniel Radcliffe, Cherry Jones, and Bobby Cannavale. Sara Bareilles’ Waitress, which still runs three years since its opening, made history with the four top creative spots (librettist, composer, director, and choreographer) in the show being filled by women—a first on Broadway and a rarity everywhere else.

The Go-Gos jukebox musical Head Over Heels introduced Peppermint to the Broadway stage, the first trans actor to create a role. With Straight White Men, Young Jean Lee became the first Asian-American female playwright on the Great White Way, and the show featured Kate Bornstein (who is nonbinary) and Ty Defoe (who is two-spirit). This coming season, Taylor Mac, a genderqueer playwright, will debut judy’s Gary: A Sequel to Titus Andronicus. 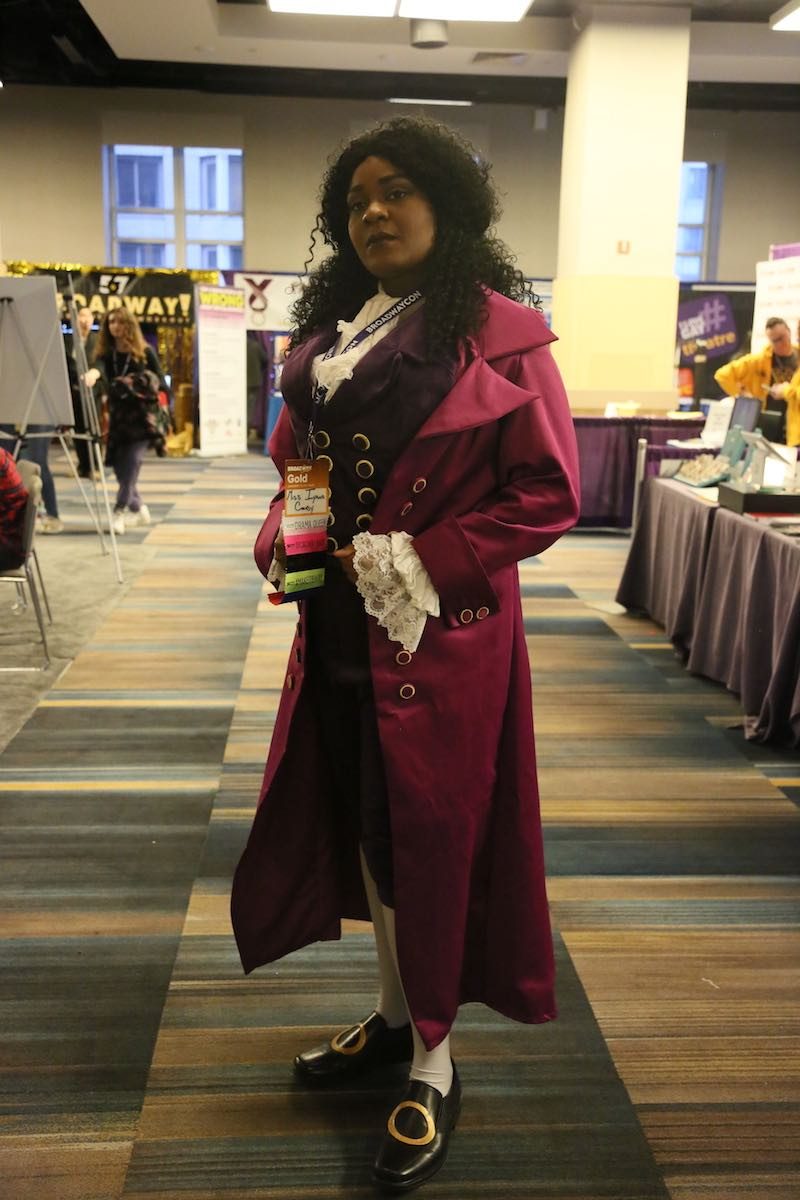 The most obvious instance is the mega-hit Hamilton, written by Lin-Manuel Miranda, which continues to grow and grow and make more opportunities for actors of all backgrounds.

So, there is more variety than ever before, but a maximum of 40 shows can run on Broadway simultaneously. As that’s happening, how many of those opportunities are going to creatives (and even actors) outside of the very historically white, male scope?

A quick stat: of the 48 shows either currently on Broadway or announced for the current or upcoming seasons, only six directors are women. In the current season, there have only been three plays directed by women on Broadway. And King Kong, which cost $35 million to produce on Broadway, has 12 creative team positions filled by men, making it the show with the worst representation of women on a creative team of any new musical on Broadway.

That’s what makes it so much more satisfying that BroadwayCon looks so much different than Broadway. More importantly, it looks like what Broadway should look like.

The convention reflects what fans of New York theatre and theatre as a whole love but don’t always get to see or experience onstage: a place for everybody and every body to call home. Mixed in with a robust schedule of dance workshops, panels on Oklahoma! and My Fair Lady, and lip sync battles, this year’s BroadwayCon scheduled featured panels on supporting mental health in the theatre industry, the history of drag, trans and nonbinary actors in musical theatre, Broadway moms juggling their lives onstage and off, Black female playwrights and Black LGBTQ+ playwrights, child actors, “crazy triple-threat Asians,” and more.

There were meet-ups for fans of Be More Chill, the mega-hit soon-to-be-Broadway musical that tackles teen anxiety and popularity, as well as those meet-ups for LGBTQ+ fans, conversations on size diversity, and too many more options throughout the weekend to list—and the fans on the floor reflect exactly those scheduling choices. 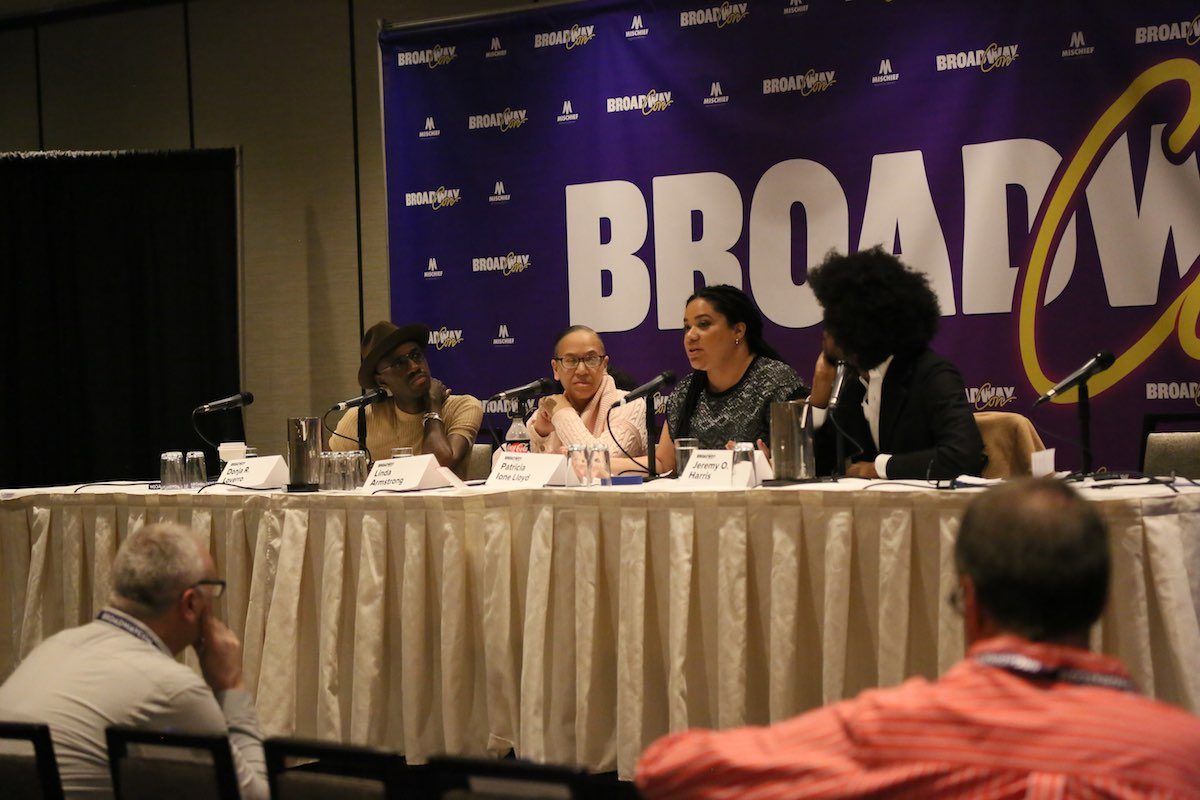 So, what exactly is going on with Broadway, where, despite regular claims of its diversity and representation, the stage is still just as skewed as film and television?

Broadway just had its most successful year in 2018, pulling in $1.8 billion thanks to names like Harry Potter and the Cursed Child, Network starring Bryan Cranston, Aaron Sorkin’s To Kill a Mockingbird, Springsteen on Broadway, and of course, Hamilton. Name recognition has become theatre’s greatest selling tool, which is not always a bad thing—Broadway does need to fill seats and feed actors—unless the work that is getting produced all looks and feels the same.

One of the biggest concerns about this season is the lack of new ideas, specifically in regard to the number of adaptations that have already been and will be produced. In addition to the shows that have already been mentioned, Tootsie, Moulin Rouge!, and Beetlejuice will open soon, as well as revivals of Oklahoma!, West Side Story, Kiss Me, Kate, Burn This, All My Sons, and True West.

Familiarity tends to mean new material—and more importantly, material that takes risks—is not getting produced, and creators know that. Director-actor Lonny Price and PBS’s Great Performances Executive Producer David Horn held their own panel on Price’s recent Harold Prince documentary and discussed just that: how “the economics of Broadway are driving the creation of familiar, branded material in a bad way,” in Price’s words.

Additionally, playwrights have the power to name their directors, which limits the size of the institution. It’s a large part of the reason why the number of female playwrights Off-Broadway is climbing while Broadway stays fairly stagnant at 16 percent this past season. At the convention’s “Seeing Through the Eyes of Black Female Playwrights” panel, that balance between seeing your work produced and staying true to yourself is a regular conversation.

“Me sticking to my beliefs is the greatest challenge,” Ngozi Anyanwu, playwright of Good Grief, said.

A Small Oak Tree Runs Red playwright Lekethia Dalcoe added, “I refuse to water down what comes to me naturally.” 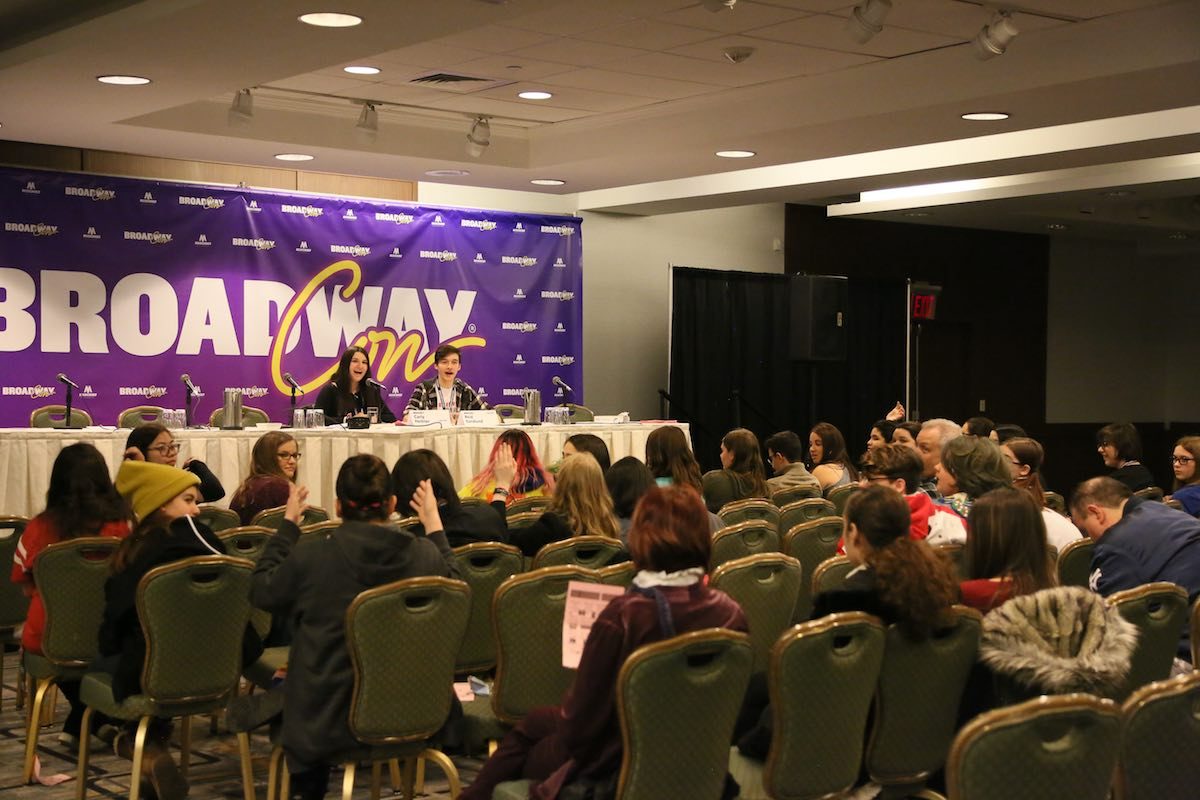 Fans of all ages and from all across the globe gather for the convention’s “Be More Chill” meet-up. (image: Alexa Strudler)

Stepping into the microcosm of BroadwayCon, which Eve’s Song playwright Patricia Ione Lloyd described as a creative “bubble bath,” it’s easy to forget all that, especially when you can hop from diverse panel to diverse panel, instead of the regular “man-els” of so many other conventions and industry conversations. Outside of the doors of the Hilton Midtown, in Ione Lloyd’s words, “within the arts and in a global way, women, women of color, and queer women, we don’t get the same motherfucking bubble baths. That’s just the way it is at the moment.”

A special 10-year study from the Asian American Performers Action Coalition examining the 2015–2016 season showed 35 percent of roles had gone to minority actors during that season, up from the year before, but breaking that down, 23 percent of all roles went to Black actors, 7 percent went to Latinx actors, and only 4 percent went to Asian-American performers. When talking about gender, those numbers getting even more dismal. In the 2017–2018 season, despite the fact women make up the majority of the Broadway audience, only 37 percent of principal roles went to women.

And despite the recent leaps courtesy of Peppermint and co., trans and gender non-conforming actors have been nowhere to be found in previous years. Even as casting has slowly started calling for trans actors, one of the most common rejections is that those actors are seen as either “too trans” or “not trans enough,” and as a result, those roles (usually already two-dimensional with “trans” as the only character description) end up in the hands of cisgender actors.

“We cannot limit ourselves on their stages and in their shows,” actor/writer/advocate Maybe Burke said in speaking on the Trans and Nonbinary Actors in Musical Theatre panel.

So, what is left to do, and how do we end those limitations? In actor and Trans/Non-Binary panel participant Pooya Mohseni’s words, “Do you see all of us up here? We are all trans; none of us look alike!” And none of theatre’s actors look the same, so why should Broadway’s stages?

The goal and the challenge is to get away from these separations and these firsts. American Theatre Senior Editor Diep Tran writes, “the mark of true progress is no longer firsts. It’s the second; it’s the third. It’s whenever we stop needing to count. It’s effortless diversity that does not stand out, that is the norm and not the exception.” As BroadwayCon shows, Broadway has the chance to look inward at itself and see what its performers look like, what its most avid fans look like, and how it can better serve everybody who cares about it.

That reflection would be an important first for theatre—and hopefully, a second, third, and so on.

Ashley Steves is an arts and culture writer based in New York City. You can either find her at the theatre or on Twitter at @NoThisIsAshley.