And Bernie's own toxicity, too. 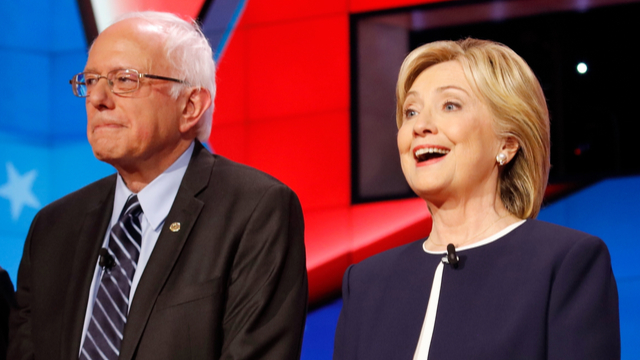 In the first excerpts of Hillary Clinton’s upcoming memoir, What Happened, we saw her get candid about her loathing of Donald Trump. But Trump wasn’t her only opponent during the campaign and she obviously couldn’t discuss “what happened” without addressing what happened with Bernie Sanders. In a passage tweeted out from an advance copy, she discusses her experience.

"Some of his supporters, the so-called Bernie Bros, took to harassing my supporters online. It got ugly and more than a little sexist." HRC pic.twitter.com/ykcvEQb2tt

As pretty much every Clinton supporter on the internet saw firsthand, sexist attacks during the election season weren’t just coming from the right. Clinton writes about how “some of his supporters, the so-called Bernie Bros, took to harassing my supporters online. It got ugly and more than a little sexist.”

“When I finally challenged Bernie during a debate to name a single time I changed a position or a vote because of a financial contribution, he couldn’t come up with anything,” she goes on. “Nonetheless, his attacks caused lasting damage, making it harder to unify progressives in the general election and paving the way for Trump’s ‘Crooked Hillary’ campaign.”

The fact that someone as unethical and unscrupulous as Trump could label Clinton “crooked” and actually get that label to stick would be laughable if it weren’t so depressing. Trump has proven just how effective aggressive repetition of a catchy moniker can be in getting people to believe a message (“fake news,” anyone?), even when that message is as ludicrous a lie as the idea that Donald Trump is more honest or more qualified to be president than Hillary Clinton.

I agree with Clinton that Bernie Sanders leaned into that false narrative. As she puts it, “he had to resort to innuendo and impugning my character.” He called her unqualified, a claim with no basis in reality, despite its ubiquity. He called her dishonest, when really many of his (and his supporters’) issues with her seemed to be more with the party than with her. Which is absolutely valid. There’s a lot to be criticized when it comes to the Democratic Party. But he was actively seeking the nomination to lead a party he openly hates–a party he is not a part of. As Clinton writes, “that’s not a smear, that’s what he says.” She says, “I am proud to be a Democrat and I wish Bernie were, too.”

The narrative that Bernie and Trump both helped create was a strong one. The Bernie-can-do-no-wrong/Hillary-can-do-no-right mentality was pervasive and infuriating. In the book, Clinton invokes the brilliant #Ponygate meme that summed it up so perfectly.

From WHAT HAPPENED: Bernie was always undercutting the Hillary campaign by promising "Magic abs!" pic.twitter.com/9k7dCKDaSd

As you’ve no doubt guessed, not all the responses to these passages online have been positive. While there are plenty of enthusiastic applause reaction GIFs in the replies to these tweets, there are also all the expected accusations. People are saying she’s bitter, she’s playing the victim, she should just let it go and disappear. Some–many, really–are even going so far as to accuse her of damaging the Democratic Party by trying to sabotage Bernie’s chances in 2020. There’s a ridiculous amount of critics who seem to see this as a refusal to accept blame, and an inability to move forward. They say this as if this passage were the entire book, rather than a few pages from its midpoint. (Also as if the officially released early excerpts weren’t specifically about moving forward.)

This book is not about Bernie Sanders. But this is a necessary part of her story, as well as ours. Finally, she’s addressing the sexism that so many Clinton supporters saw and experienced throughout her campaign, and that’s therapeutic for a lot of us. It means a lot to hear her validate our experiences and to hear about the silent struggle she was going through.

"President Obama urged me to grit my teeth and lay off Bernie as much as I could. I felt like I was in a straitjacket." – HRC pic.twitter.com/AAaKCq9DAR

What Happened will be released on September 12th. I’m going to stock up on tissues now.