What Happened Last Night on Lovecraft Country and Was It the Wildest Episode Yet? 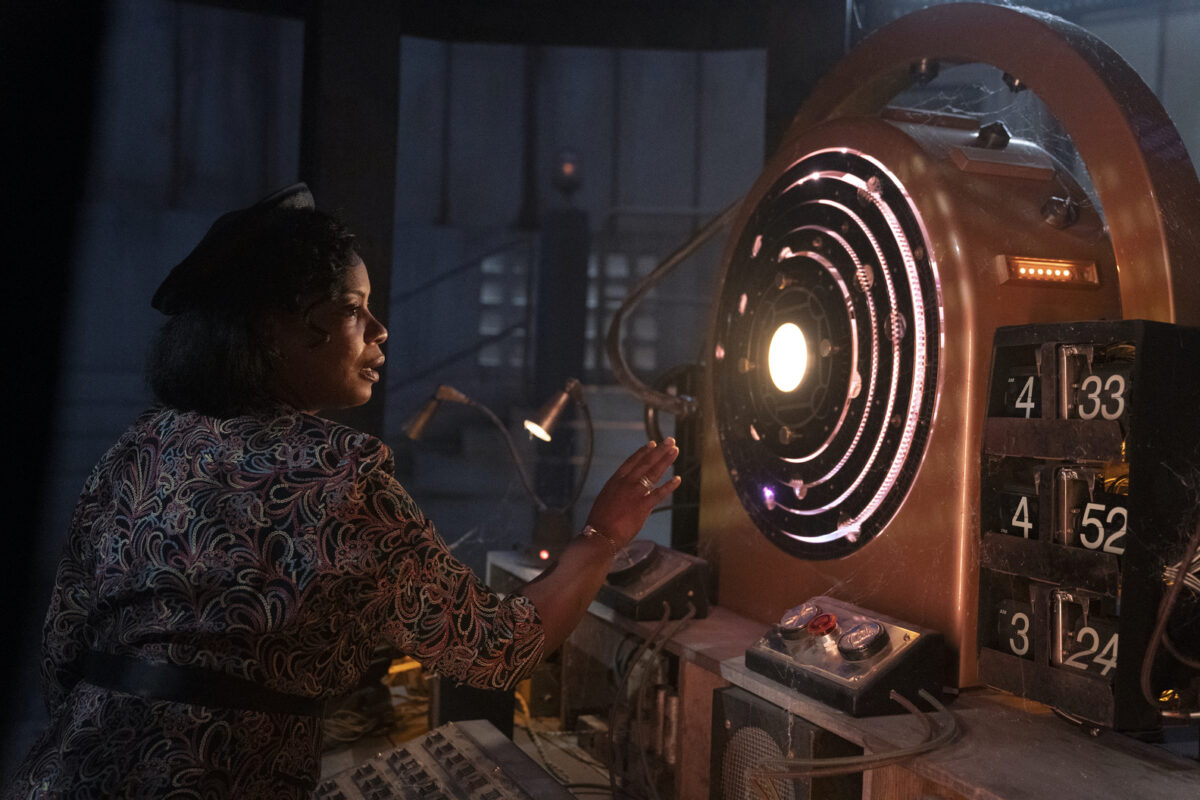 **SPOILER WARNING FOR HBO’S LOVECRAFT COUNTRY EPISODE 7, “I AM.”**

Lovecraft Country continues to be the most ambitious show currently airing, but last night’s seventh episode, “I Am,” took the genre-hopping series to an incredible new level that left me both awed and scratching my head. The episode went hard into science fiction in a way we haven’t seen before, and it was as beautiful, revelatory, and perplexing as the best sci-fi out there.

So, let’s recap the “normal” stuff going on: Ruby confronted Christina, who continued to be vague about her own gender and sexual identities but did seem cool with telling Ruby “everything.” Ruby then spent some time watching Dee, with Leti around trying to repair their relationship. But Ruby wasn’t too interested, since she knows Leti was lying to her face. Leti is also probably pregnant, and she and Tic found out Montrose is gay. Meanwhile, Tic went to St. Louis to try to find the Book of Names.

Tic had to take the bus to St. Louis because Hippolyta had woody and she was on a trip to find Hiram’s time machine (just … go with everything in that last sentence). I loved that the thread of Hippolyta as an astronomer and math whiz continued in this episode, and we got to see her figure out the Orrery and find the key and coordinates to a time machine located in an old observatory. It was equally awesome to see her figuring out the math that made it work.

We’ve had hints all season at how brilliant Hippolyta is, and this episode centered on her to really explore that and the consequences when a Black woman with a brilliant mind and massive dreams is shut down and enslaved by a racist, sexist, limited society. And Lovecraft Country did that in a completely mind-bending way in an episode that was a true tour de force from Aunjaenue Ellis.

Hippolyta managed to turn on the machine, which might not have even been a time machine at all, just as the police and Tic arrived. There was a shootout, and she and Tic were sucked into a portal to … somewhere. And Hippolyta ended up on another Earth in another time. I think. I’m not entirely sure, but it seemed like there were coordinates that acknowledged she was in different realities, and as she zoomed through galaxies that looked a lot like the nerves of the human brain, we were left wondering if she was on a journey that was in her mind or in a different level of reality. Or both.

Hippolyta found herself in an amazing afro-futuristic place where she met a being played by Karen LeBlanc who is credited as Seraphina/Beyond C’est. The name “Seraphina” indicates she’s angelic, and “Beyond C’est” isn’t just a great Beyoncé pun, but it means “beyond it is.” Both names fit as she was a figure who demanded that Hippolyta name herself, redefine her reality, and in doing so, explore and the full potential of who she was and could be.

If that possible angel alien wasn’t wild enough, we followed Hippolyta as she found herself and her name. She danced in Paris with Josephine Baker, enjoying freedom from societal pressures and responsibility, but feeling that freedom made her all the more cognizant of the ways her joy and freedom had been taken away by white society. Then, she entered another new life (or flashed into a past life), and she was a version of her namesake, Hippolyta the Amazon queen. She trained to fight and destroy the white men who would have her and other Black women as slaves. She and her Amazons won one dessert skirmish against confederate soldiers before being destroyed.

The scenes of Hippolyta as a showgirl and as an amazon were amazing, showcasing different kinds of freedom and power and the ways in which women, especially Black women, are told they are too much or have their freedom. They showcased the anger and desire that was deep within Hippolyta, fueled by how much her lack of freedom had cost her.

This led Hippolyta to the most moving scene of the episode. As she named herself Hippolyta, wife of George, she found herself back in the arms of her husband, whose death was what drove her to the time machine. She confessed to him about how she had made herself small for him, and how he had helped, even though he had loved her dreams. This scene was so poignant because I think so many women feel like they have had to make themselves small for the sake of others, be it society or a spouse or even a child.

As Hippolyta transformed again, finally naming herself “Hippolyta, Discoverer,” she took on the form her daughter had given her in a comic, a cosmic explorer capable of anything. That’s what she was in her daughter’s eyes and finally in her own … and she had the chance to stay in the enlightened state of self-actualization, according to Seraphina. But she also didn’t want to leave her daughter behind.

The episode ended with Tic coming out of the portal with the novel Lovecraft Country in his hands (WHAT?!), but with Hippolyta still missing. Oh, and there’s that problem of the dead police officer who Hippolyta shot on the ground next to a comic drawn by Dee. We’ve broken the fourth wall to smithereens, I guess?

It will be really interesting to see how everything going on in Lovecraft Country all comes together (if that happens). I’ve really enjoyed the way that each episode of the show is a different genre or trope and turns sci-fi and horror conventions on their heads to center the narratives on people (mainly women) of color. It’s a brilliant way to explore racism and misogyny, and it’s extremely entertaining.

But from an overall season and series perspective, it gives me pause, because I can’t imagine a way that all these disparate stories—ghosts, monsters, time travel, cults, space, fox demons, shapeshifting, and more—all come together in a way that’s coherent and reaches a satisfying conclusion. The strength of the show is how it’s explored so many genres, but that’s also proved a weaker point because, by its nature, this format doesn’t let the show maintain a consistent pace, tone, or character focus.

So, while I loved this episode and I’m excited to see what genre we tackle next week, I hope that there’s a plan for how this all comes together in the end.