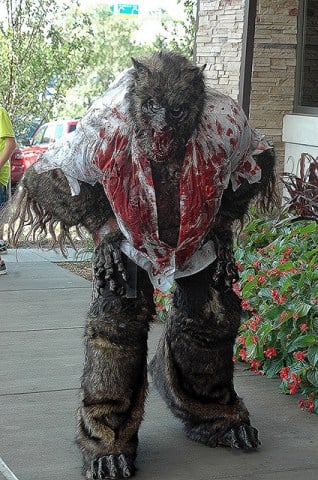 Forget the food pyramid, eat like a werewolf! At least that’s what celebrities like Madonna and Demi Moore are (definitely just rumored) to be doing. What is the Werewolf Diet, and how can I, too, recapture the body I had as a hot Teen Wolf, you ask? That’s what we wanted to know too!

We here in the office had a lot of questions about this new, totally legitimate and not at all unhealthy way for women to restrict their eating habits.

Dan presumed it involved eating only werewolves, which is the same thing as starvation. Glen thought it meant you could eat as much as you want once a month upon assuming lycanthropic form, as long as you only eat people. I thought it had to involve werewolves gnawing off your limbs, especially since werewolf dieters claim to be able to lose up to 6 pounds per day.

Guess what? We were all wrong!!

The Daily Mail (not peer reviewed, duh) has the true scoop on how Madonna east like a werewolf, or doesn’t eat, or is a werewolf, whatever.

Also known as the Lunar Diet, it is based on the idea that the moon effects the water in our bodies in the same way that it determines the tides of the oceans, and that this power can be harnessed to help you lose weight.

The diet requires practicioners to consume only liquids during certain phases of the moon, and involves strict observance of lunar phases. Says the website Moon Connection,

Consuming more fluids will call on the power of the moon, stimulate renal activity, and allow your body to lose its excess water. This flushes out the toxins that accumulate in the body due to unhealthy foods, bad digestion, and stress, and provides a detoxifying effect that will strengthen your immune system.

But how can the moon help us lose weight when it is made of cheese? I’m a woman and I’m so confused!

Ultimately, this all comes down to what I first expected -periods. Dietician Jeanette Crosland very patiently sat through an interview with The Daily Mail, in which she stated:

There may be some evidence that fluid retention occurs at some points in the menstrual cycle, and therefore at other points in the cycle this fluid will reduce.

However not every female will be at the same point in her cycle when a full moon occurs.

If indeed the effect of the moon is to reduce the water content of the body, any effect is temporary and true “weight loss”, the target of the weight reducer, is the result of losing excess body fat, not water.

It’s tragic to me that Crosland would have to remind people of something we’ve known since around the time Western Society began condemning witch trials — women do not ALL cycle together. We do not all cycle with the moon. We are not werewolves.

We may, however, be more susceptible to werewolf attacks during our moonstruation. I wonder why she failed to mention that?

Whatever, she was probably just on her period.