Scientists Say Dieting Causes Your Brain To Eat Itself 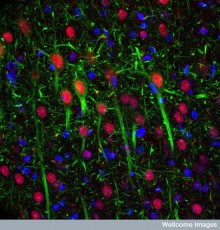 We’ve all heard the reasons why dieting can be unhealthy. Most nutritionists will tell you that eating the right food in the right quantity is far more beneficial for health than going on some fad diet, but researchers at the Albert Einstein College of Medicine have a new reason why you shouldn’t diet. Dieting causes the brain to eat itself. Om, nom, nom.

Published in the journal Cell Metabolism, the researchers found that in mice, neurons in the hypothalamus start to eat their own organelles (interior parts of a cell) and proteins when the animals are deprived of food. Now, the body cannibalizing itself isn’t something new, when the body is starving cells will start consuming pieces of themselves in a process known as autophagy, but until now, it was believed that the brain was resistant to this process.

The hypothalamus is a region of the brain, located right above the brain stem, that regulates functions like sleep, temperature, thirst and hunger. When the autophagy process was initiated it sets off a chain reaction by which fatty acids are released into the body that trigger the release of hunger signals that tell the brain it needs food.

When autophagy was purposely blocked by the researchers, those hunger signals were blocked. The researchers observed that the mice became thinner, ate less, and burned more energy. This finding might help researchers understand how a diet high in fact actually makes people more hungry. The fatty acids in the blood stream might be triggering extra autophagy that makes the person think they are hungry.

If this research could be translated into humans, it may help researchers develop better treatments for conditions like obesity and metabolic syndrome, which are prevalent in the United States.