Well Sure, Professor Marston, Wonder Woman Does Sound Ridiculous When You Put It Like That 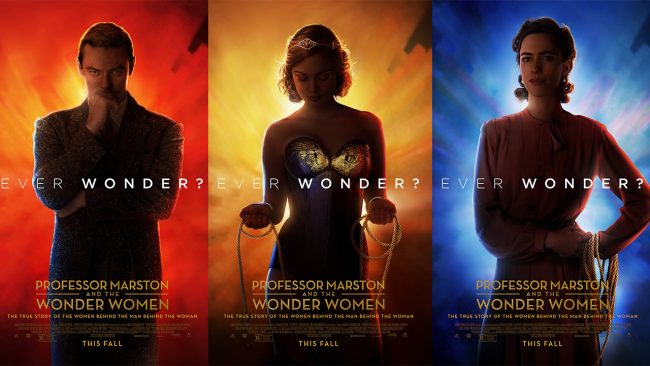 If you love comic book history, nuanced female protagonists, LGBTQIA+-centric stories, and tales of unconventional relationships, Professor Marston and the Wonder Women will likely be right up your alley. It not only tells the story of the creation of Wonder Woman, but of how she was influenced by the relationship between her creator, William Marston, his wife Elizabeth, and their lover, Olive.

In the clip below, we see Marston (Luke Evans) trying to explain his initial thoughts about an Amazon heroine to Elizabeth (Rebecca Hall) and Olive (Bella Heathcoate) by showing them his inept comics pages. They are less than impressed by his story, not to mention his not-so-subtle allusions to elements of their real life:

Well, sure, when you put it like that, Wonder Woman sounds absolutely preposterous. Also, I can’t imagine what it must be like to listen to your writer-significant other describe a character to you that is very much, well, you. Or aspects of you. I’m just glad they eventually got to see that Wonder Woman became an icon of which they could be proud!

We’re gonna have lots of Professor Marston and the Wonder Women coverage here at TMS in the coming weeks. Later this week, I’ll be posting an interview with director Angela Robinson as well as a review of the film, and next week I’ll be covering the film’s premiere at the Toronto International Film Festival where, among other things, I’ll be getting interviews with the amazing cast!

Start getting excited, people! You don’t have much longer to wonder… Professor Marston and the Wonder Women arrives in theaters everywhere October 13th!