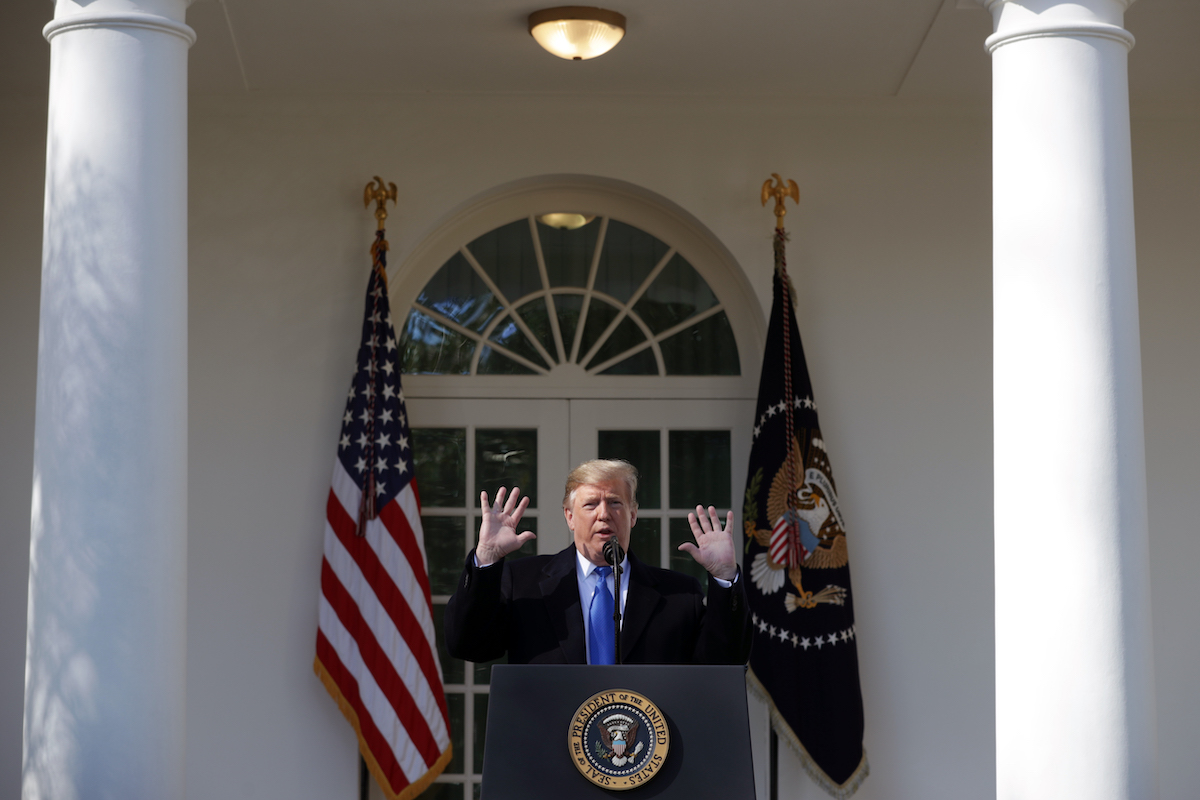 After a lengthy battle with Congress over funding his beloved racism monument, which included the longest government shutdown in U.S. history, Donald Trump finally followed through on his authoritarian threats and declared a national emergency.

While the term “emergency” sounds dire, all it really means is that Trump has given himself special powers to act without congressional approval. Lots of other presidents have declared emergencies, often to impose sanctions on foreign powers. It’s a tactic that Trump himself once derided because there really is a tweet for everything.

By declaring a national emergency, it allows Trump to save face after losing a very public fight over something he’s been touting as the basis of his entire presidency since his early campaign days. Now he can sign spending bills that don’t include money for the wall, avoiding another government shutdown, because Nancy Pelosi has made it 100% clear that racist wall money isn’t going to be included on anything that comes to his desk.

Thursday afternoon, Sarah Huckabee Sanders let us all know that this announcement was coming, choosing to do so ever so professionally, via what appeared to be a Notes app memo.

No greater sign of what a shitshow this administration is than declaring a national emergency on the notes app https://t.co/mFbYHG9r4C

She couldn’t even be bothered to remove the sloppy mark she left when cropping the photo.

Trump’s official announcement, which took the form of a Rose Garden press conference, was … well, it was something. He rambled. He attacked reporters. He invited a group of “angel moms” holding photos of their loved ones who had been murdered. At one point, he also started talking about trade deals with China.

He said that China has the death penalty for drug dealers, and that as part of that trade deal, fentanyl will be added to the “criminal list,” something he is “most excited about.” Pointing to this use of the death penalty, Trump also said in his faux-mafia tone, “So if we wanna get smart, we can get smart. You can end a drug problem. You can end it a lot faster than you think.”

As sometimes happens when left to ramble for too long, Trump also started saying things that contradicted the very thing he was there to say in the first place. Despite frequently blaming Barack Obama and previous administrations for not doing anything about border security, he also managed to find a way to brag about having created the “crisis” himself.

Trump: “In a way, what I did by creating such a great economy, and if the opposing party got in, this economy would be down the tubes.” He mocks people who say “the previous administration” had something to do with the good economy. He is rambling hard.

He also flat-out said there is no emergency. “I didn’t need to do this,” he said. “But I’d rather do it much faster.”

Likely to be used in future lawsuits: Trump on his national emergency declaration: “I didn’t need to do this. But I’d rather do it much faster … I just want to get it done faster.” Via CNN pic.twitter.com/HcPrQdhRJ9

So, then, what is the emergency? https://t.co/ewdbBz3xGa

“I didn’t need to do this” is admitting this isn’t an emergency at all.

“I didn’t need to do this” means he’s faking a crisis. https://t.co/TVqp0z4EHI

He said IT’S A NATIONAL EMERGENCY.

Then he said I DIDN’T NEED TO DO THIS. #FakeTrumpEmergency pic.twitter.com/1SbnMcW2Qe

“I DIDN’T NEED TO DO THIS” pic.twitter.com/m3FsG9v2Kb

Trump seems to know that his nonexistent “emergency” is going to be challenged by Congress in court. In a bizarre sing-songy voice, he rattled off the expected steps for the case, going through the 9th Circuit and the Supreme Court.

(Warning: Video may cause brain bleeding. Or at least that’s what it feels like.)

And, indeed, that’s already what is happening.

.@JoaquinCastrotx and I aren’t going to let the President declare a fake national emergency without a fight. https://t.co/iPlcVVsm6U

Meanwhile, it’s hard not to think about all the actual emergencies Trump could be addressing instead of this nonsense.

Donald Trump’s ridiculous wall is not an emergency.

You know what is?

Other experts agree that there is, in fact, a crisis at the southern U.S. border but it’s not the one Trump is talking about. Politico writes, “The United States is not being overrun by people trying to evade Border Patrol. The majority of people showing up at the southern border are women and children who want to request asylum, under the legal immigration system. They are generally seeking out border agents”.

But Trump has been promising this pointless, racist wall for years, and he’s going to make it happen or at least waste enough time and resources that he can convince his base he tried before probably finding some way to blame this all on Hillary Clinton or something.

As a fittingly strange capper, Trump ended the conference by telling his new attorney general to “Enjoy your life.” So let’s all try to do that, I guess.