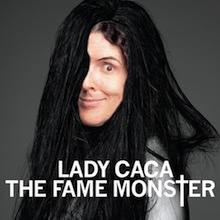 Some of today’s musical artists just don’t seem to understand that it’s an honor when “Weird Al” Yankovic parodies one of your songs. Back in 1985, Madonna was canny enough to slip the suggestion to Weird Al that “Like a Surgeon” would be a humorous title for a “Like a Virgin” parody. But her would-be successor, Lady Gaga, humorlessly shot down a Weird Al parody of “Born This Way” called “Perform This Way,” according to a posting on Yankovic’s blog which documents the bizarre saga.

You can read the whole thing there, but to make a long story short, Yankovic sent the following pitch for the song to Gaga’s camp:

I’d like to do a parody of Lady Gaga’s “Born This Way” called “I Perform This Way.” The basic concept is that I, as a Lady Gaga doppelganger of sorts, describe the incredibly extravagant ways in which I perform on stage. Meat dresses and giant eggs would most likely be referenced, but also much more ridiculous made-up examples of bizarre wardrobe and stage production. As with all my parodies, it would be respectful of the artist, while having a bit of fun with her larger-than-life image.

Gaga’s camp proceeded to stonewall Yankovic. First, he sent them the song’s lyrics; they said they had to actually hear a final version of the song to approve it. Keep in mind that recording a song is a lot of work, especially for one of Weird Al’s (actually!) exacting musical standards. He proceeded to do so, sent it to Gaga’s camp, waited for a few days, and then got the final word: “Lady Gaga says ‘no.'”

And since Weird Al’s music counts as parody, he could have just released it anyway, but he didn’t, because he’s considerate like that:

My parodies have always fallen under what the courts call “fair use,” and this one was no different, legally allowing me to record and release it without permission. But it has always been my personal policy to get the consent of the original artist before including my parodies on any album, so of course I will respect Gaga’s wishes. However, given the circumstances, I have no problem with allowing people to hear it online, because I also have a personal policy not to completely waste my stinking time.