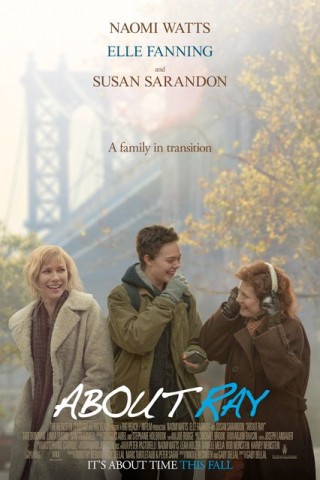 Casting a cisgender actress like Elle Fanning in the lead role of a film about a trans boy is problematic to say the least. At least, many of us think so. For About Ray director Gaby Dellal, casting Fanning was totally okay for reasons I’m sure you all have heard before. This, plus some other stuff she says in a recent interview, show how little she gets it, and why she probably shouldn’t have told this story in the first place.

In a recent interview with Refinery29, Dellal busts out all the old chestnuts re: casting a cis actor in a trans role. There’s the “big name” angle:

I would never discriminate against a trans kid or actor coming up to audition, but in this day and age in cinema, where it’s almost impossible to raise the financing, unfortunately we have to have some people that mean a certain amount of money.

So … Naomi Watts and Susan Sarandon, who’re both in the film, weren’t good enough to gain financial support? And does she mean to say that if she would’ve auditioned a brilliant, cisgender no-name actor that she could’ve had the chance to “discover,” she wouldn’t have “taken a chance” on them, either? How does she think stars get created? Someone, somewhere gives them a shot. If there are no trans “name actors” of the right age/type/look, perhaps it’s because we haven’t been doing enough to cultivate them. Not every trans role can go to Laverne Cox.

Then, she busts out the “this person is just starting to transition, so it needed to be a girl” excuse, doing some quality misgendering in the process:

The part is a girl and she is a girl who is presenting in a very ineffectual way as a boy. She’s not pretending to have a deeper voice. She’s just a girl who is being herself and is chasing the opportunity to start hormone treatment. So to actually use a trans boy was not an option because this isn’t what my story is about.

That’s just it, Ms. Dellal! Ray’s not “a girl who is being herself,” he’s a boy trying to be himself. Your story is absolutely about a trans boy, and saying otherwise sounds like you don’t actually believe trans men are men without medical transitioning.

The fact that Dellal can’t even articulate what being transgender means when discussing her own movie about a trans person is a huge red flag. What’s more, if it had been a priority to cast a trans actor, and they would’ve put out a wide enough net, I’m sure that they could’ve found someone who fit the bill as far as stage in transition, but also identified as transgender. And OK, they might not have been as good an actor as Fanning (then again, they might have been—we’ll never know), but they would’ve had the lived-in experience to do the role justice. There are plenty of films that use non-actors and do amazingly well.

But then, when you hear about the genesis of the film, it all starts to make a certain amount of sense. According to the interview, Dellal was originally creating a film about three generations of women, appropriately titled Three Generations, two of whom were gay. It wasn’t until Dellal met someone whose child was transitioning that she became interested in a transgender character and decided to rework the film around that. And that shows in her conversation.

You can’t just shoehorn in being trans to make your story more interesting. In the interview, Dellal admits that she was very unaware of transgender issues only three years ago:

Three and a half years ago that was news to me. [W]e all think we’re working in a generation where transgender issues are very normal — [covered by mainstream media] — but I don’t think they were as little as three years ago. They weren’t as transparent. I’m not saying they didn’t exist, but I didn’t know about them.

So she, not knowing about the subject at all, decided to change the movie she was already making to make it about a trans person, and seemingly doing a lot of research into the medical transition bit (we see that in the trailer), but not enough research to know that the character isn’t a girl?!