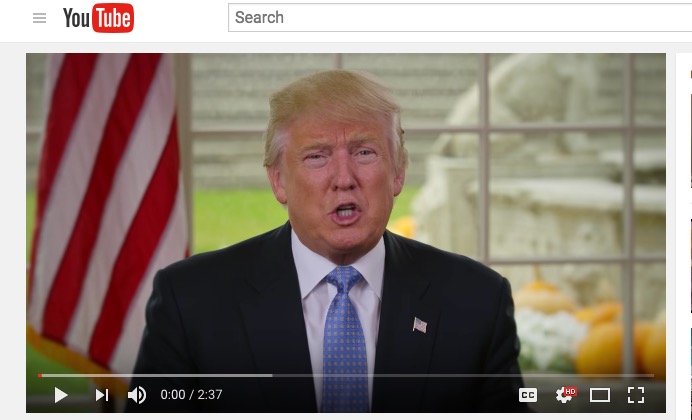 The Internet and the entire tech industry are in need of government officials who understand technology, but the web savvy we’re getting is more like a teenage troll than anything actually helpful. Donald Trump continues to use the Internet as his own, fact-free direct line to supporters, but the team he’s building suggests that the future of the Internet may not be very free and open.

After a meeting with major news outlets that apparently was “like a fucking firing squad,” he skirted the media yet again to send a message about his first 100 days straight through YouTube. He’s also made continued use of his Twitter account to trash the press—especially the New York Times, with whom he canceled a meeting this morning with a reported lie about who it was that tried to change the terms at the last minute.

To those of us who see Donald for what he is, this is an obvious tactic to get around having to hold a press conference (which he’s gone unusually long without doing after voting day, judging by past presidents) and being immediately held accountable for his words, but to his supporters, it’s a breath of fresh air in not having to listen to that lying “mainstream media.” Sadly, we’re finally getting a president who truly seems to understand the Internet, and that understanding seems limited to its ability to manipulate with a false sense of transparency and truth.

Meanwhile, he’s choosing opponents of net neutrality, which was already hanging on by a thread, to lead the way on his team. Both Jeffrey Eisenach and Mark Jamison, who have been put on his Federal Communications Commission transition team, have ties to the telecom industry, with the latter being a former Sprint lobbyist. They both frame their anti-net neutrality arguments from the point of view that the current school of thought on neutrality is actually bad for the Internet overall, but I’d be willing to take a guess that “bad for the Internet” in their minds more likely means “bad for giant telecommunications companies’ ability to make tons of money.”

At this crucial moment, we need someone who really understands how to make the Internet work best for society, not how best to turn it against us.

(via The Verge, image via screengrab)