We Talked to Alan Tudyk and Sara Tomko of Resident Alien!

How do you make a series about connection in the time of COVID? 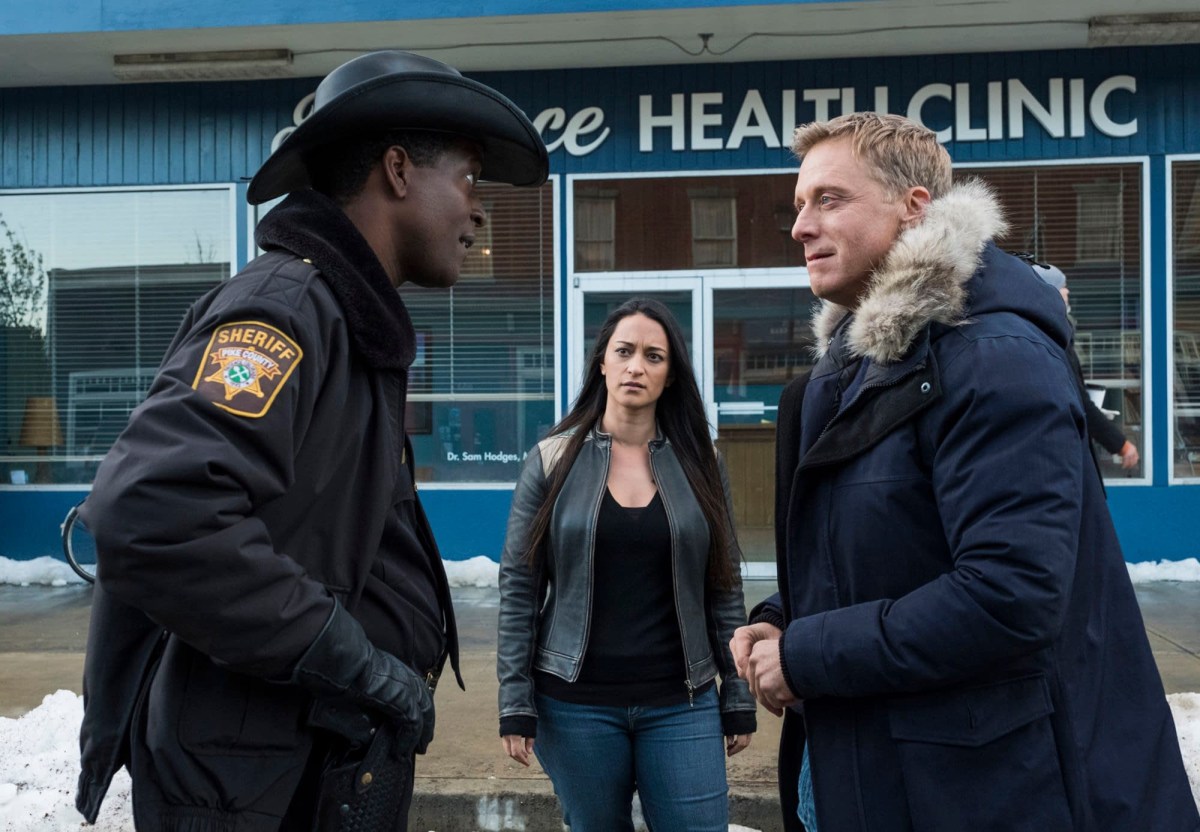 When filming on SyFy’s Resident Alien had to pause last year due to the coronavirus pandemic, the cast and crew didn’t know that, when they came back to finish shooting, things would be very different, or that the show with a central theme that our humanity comes from our connections and honor for each other would resonate even more. But resonate it did.

In the last week, I got to chat with Alan Tudyk, who plays Harry, a slightly murderous alien pretending to be a small-town doctor, and Sara Tomko, who plays Asta, his suspicious but resilient assistant and grudging friend, about the show and filming during COVID. First off, we talked about characters, especially coming up with them when one of them isn’t from around here.

Harry, as I mentioned, is an alien that learned most of his humanity from television, so how did Tudyk develop that character? The humor came from the writing and, well, physically at least, it was a very specific thought process when it came to an alien in a human body. “He’s using the body for the first time and trying to get used to using it, sort of like a, I don’t know, maybe if I tried to get into the big rig and drive it around,” Tudyk explains. “I kind of know how to drive, but I think if I had like a whole huge contraction to figure out” it would be different. That’s what it’s like for Harry.

Harry also learned to speak thanks to Law and Order reruns, so I had to ask if Tudyk brought any Jerry Orbach into the performance? Alas no, and Tudyk even had to dial back the commercial and television reference. “The problem with that was it was like, well, then that’s just going to take over. So, uh, we didn’t go that direction,” Tudyk explained. “I would’ve got some more, Orbach-isms in there.”

As for Asta, she’s obviously a lot more human. According to Tomko, she’s “layered and raw and vulnerable. And she is someone who is like going through grief and feeling a lot of isolation because of that. And so it’s kind of no surprise when she meets Harry, she has a really hard time trusting men,” but she’s able to connect to another outsider. “She’s surrounded by her friends and her family,” Tomko said as well, “but she is still searching for something. And I think what she’s searching for is I think only something that maybe Harry can provide. Or even beyond Harry is something bigger than her that she’s still trying to figure out what it all means.” 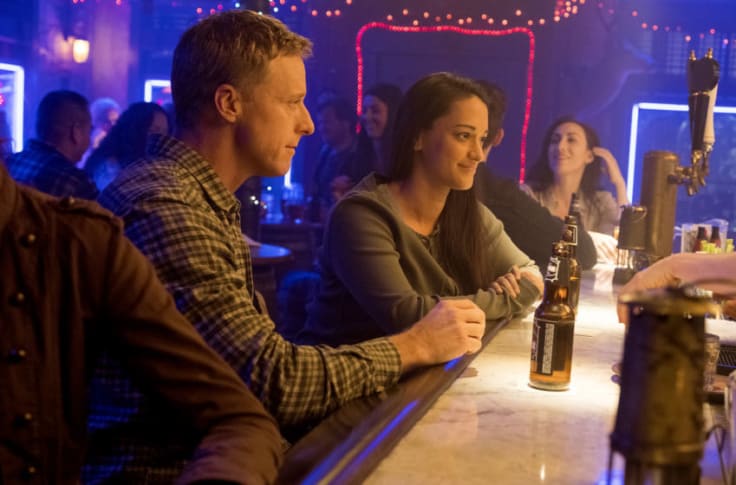 Figuring out how to connect with people, thinking of how and why we’re responsible for them or should care at all when humanity is terrible and doomed, wondering what it all means … those are themes of the show, but they’re also themes we’re all facing in a global pandemic.

Speaking about the way the show resonates right now, Tudyk had a lot of thoughts: “We’re all facing this disconnectedness, not just in our physical proximity being forced this way because of the pandemic, the ongoing plague, but also just, I feel that humanity as technology takes over more and more, you know, there’s disconnectedness with one another.”

Which means that we’re all feeling a little alien, one might say. Tudyk went on: “Telling the story of an outsider who’s coming in, who sees only the negative parts about humans and sees them as a problem that needs to be just wiped away. And then as he … starts to feel like humans and starts to find commonality and sees that the strength that humans have is their connectedness, their family–which is absolutely in my experience in life–that’s where sanity is, is connecting with one another.”

“I think that’s, what’s the most relatable thing about the show,” Tomko agreed, adding that it feels like a bit of “divine timing,” for a show like this to premiere right now. Tudyk added, “It’s when we get isolated, definitely, when I get isolated, closed off, that I stuck. Just get stuck in a thought loop where you get stuck in a loop, but it feels more like the toilet swirling around. It’s just nothing. It’s just not a good place to be, you know, a toilet and all,” which, again, is why other people are nice to have around.

But filming during a pandemic isn’t easy, physically or even emotionally. “Anxiety was just like hanging in the balance,” Tomko said of the feeling when filming restarted. “Everyone was very grateful to be working because you know, there’s not a lot of people working right now … but it required us all taking tests, doing a two-week quarantine. Once we showed up, we had to do three tests a week. And then normally that you have like a comradery with a crew or other members on set.” That wasn’t there.

“It was like the seas parted and they had to be on one side and we had to be on the other,” Tomko explained of the separation from the crew. “They weren’t allowed to even be here. So it felt really even when you were on set, it felt isolating. And, and that’s, that was certainly hard for, um, an ensemble like ours. That is so we were like family and we have great relationships with our crew. So it just felt like even though we’re on set together and trying to do this right, we still have to be far away from each other and can’t connect the way we’d love to.”

Filming during a pandemic (and after 6 months off) made Tudyk more mindful as well. “The main difference for me initially was that my pants were two inches bigger in the waist,” Tudyk joked a bit, saying the post-pandemic fitting was “a stark wake-up call that maybe I had been a little too sedentary during the six months off we had.” But more than that, it gets back to the theme of the show and the pandemic of caring about other humans.

“Everybody was together in a way that we hadn’t been, oddly, because … you’re forced to be responsible for others’ health,” Tudyk explained. “I think that’s what one of the big challenges of this pandemic has been, is that people don’t want to wear a mask and take precautions because they say ‘I’ve got my own freedoms’ and ‘I don’t have to do what you tell me to,’ but it’s really about taking care of others, not wanting to spread disease and hurt other people around you.”

On set, it was something that the cast and crew had to do because it was part of their job, Tudyk explained, but it made everyone come together and be mindful in a way that wasn’t happening in the real world. “Because if anybody got sick, it would shut down the production,” Tudyk said, “and it was something we all together loved and we’re working on. But, um, so I don’t know, it was, there was a unity there that I had been missing in the real world.”

And maybe, in some ways, Harry is right that humans can be horrible and selfish, but they can also be caring and good and make nice things like pizza, and fun television that reminds us to connect to one another.