We Ranked These Modernized Portraits of U.S. Presidents by Bangability

RAIL to the chief. 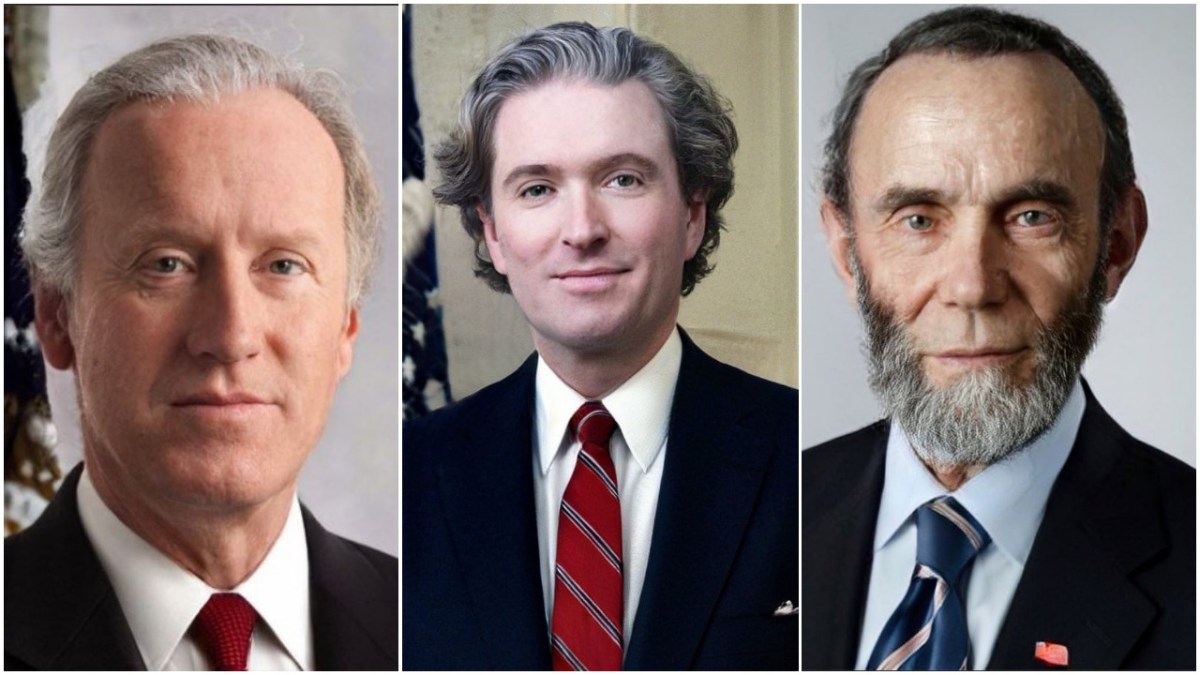 What goes through our minds when we think of our nation’s founding fathers? Many of us picture serious-looking men in tri-corner hats and wigs, stiff and unsmiling in rigid poses. These are images meant to command awe and respect, not relatability or horniness. That would come later with the invention of photography, which humanized our leaders and leant an air of f-ckability to their public image.

We’ve often wondered which founding fathers could get it, and thanks to a Twitter thread by comic book writer Magdalene Visaggio (Kim & Kim, Vagrant Queen), we now know. With the help of apps Faceapp and Airbrush, Visaggio posted a lengthy thread of modernized presidents. These generated images of the first 18 presidents offer a fascinating, if highly unscientific look at what these former presidents might look like today.

But we must ask ourselves a singular question, the only question that comes to mind when humankind is faced with new technology. In the immortal words of Mark Zuckerberg, “let’s rank these dummies by hotness.” Okay, Zuckerberg never said those EXACT words, but the desire to rank school chums by bangability was the founding mission of Facebook. And now Facebook has the power to manipulate elections. There’s a direct line between thirst and power, and there’s no denying it.

In light of this, there was only one thing left for us to do: rank these modernized presidents by bangability. Now these highly unscientific and extremely subjective rankings are based on image alone. After all, most of these guys were wildly racist, sexist, xenophobic, and disgusting human beings. That’s a conversation for another day. We’re only here to talk looks. So let’s count down, from least bangable to most bangable presidents. Unrelated, but I’m beginning to thing that quarantine is affecting my mental health.

Zachary Taylor, the 12th president, died 16 months into his term, making him one of the least memorable presidents. According to reports of the day, Taylor consumed “copious amounts of raw fruit and iced milk”, which lead to him dying of diarrhea and dysentery. We have so many questions, not the least of which is, who puts ice in their milk? Indeed, Taylor’s “shitting myself to death” facial expression tells the whole story. Sorry Taylor, you can take your iced milk and go home.

We stan a short king, but John Adams looks decidedly creepy here. When he’s not working as Bilbo Baggins’s accountant, Adams looks like he would be presiding over the Ohio legislature and arguing in favor of transvaginal ultrasounds. No thank you.

When I was 16, a creepy old man approached me from behind, put a clammy paw on my shoulder, and asked me if I had “any I-talian blood” in me. I cannot prove that this man was Andrew Johnson, but I also can’t NOT prove it, you know?

Do you like your men pasty and dead behind the eyes? Then ladies, have I got a fella for you! His name is James Buchanan, and he’s a real catch for those who find Julian Assange too swarthy for their tastes. Slap some sunglasses on him and bring your Weekend at Bernie’s cosplay to the next level!

“Honey, who keeps texting you at 3AM?”

“Oh, it’s my boss, Millard Fillmore. He’s been liking my Facebook photos from that 2012 trip to Lake Havasu where I’m wearing a bikini.”

“Good God, that’s an inappropriate amount of winky smiley face emojis. He knows you can see this, right?”

JQA is rocking what Tyra Banks would call a “fivehead”. But his egg shaped dome is nothing compared to his thin smile and lizard eyes. This photo alone is enough to launch an 8-part Netflix true crime docuseries or a Forbes Magazine cover, depending on the day. Is JQA the president of Enron or does he have a freezer full of human ears? Get you a man who can do both, I guess?

Is this Andrew Jackson or John Kerry with quarantine hair? I’m sorry, that’s an insult to Kerry and hair.

WHH, who was president for barely a month, is best known for his popular pick-up line, “Hey girl, is it hot in here or am I dying of enteric fever?” Sure, William Henry will come on strong on those first few dates, but then will ghost you after a month of dating. Too soon?

Remember that movie Dirty Grandpa, where Robert DeNiro has a gross romance with Aubrey Plaza? I mean, looking at Van Buren I kind of get it. He’s got a mischievous glint in his eye that makes you say, “Is that a roll of Werther’s Originals in your pocket or are you just happy to see me?” Van Buren looks like the type of kindly old grandpa that would pay you $200 to wear kitten heels and a gauzy nightgown while you perform a seductive dance to the hits of Rosemary Clooney. You could do A LOT worse, is what I’m saying.

John Tyler, the 10th president, fathered 15 children, the most of any POTUS. So you know what that means: THIS GUY FUCKS. Tyler was also the earliest former president with a living grandson, Lyon Gardiner Tyler Jr., who passed away just months ago. Now that’s some good genes.

Is James Madison the first president on this list with a genuine smile and normal, non-serial killer eyes? Be still my beating vagina. This Jonathan Pryce lookalike is down for some flirty shenanigans, and seems like the kind of guy who cracks jokes during sex. What a delight!

Well hello, Monroe! There’s kindness in his eyes, like that of a tender Humanities professor who happily goes down on you without expecting anything in return. Gotta love a man with a big Doctrine.

Rock me Amadeus! Is this F. Murray Abraham or Honest Abe? I’m drawn in by his soulful eyes, his salt and pepper beard, and his height. Plus, look at these takes on femme Lincoln and young Lincoln, who looks like Ben Wishaw. Ding dong! There have long been rumors that Lincoln was gay or bisexual, which tracks because we’ve all had unrequited crushes on gay men.

I like to push it over multiple iterations to see how far I can get. Here’s some Lincolns. pic.twitter.com/7zeq7DmwbH

The 14th president bears a striking resemblance to Ohio senator and liberal heartthrob Sherrod Brown. He also looks like a cross between Bruce Greenwood and Ben Mendelsohn, which I’m not mad about. Go on ahead and act out your Double Jeopardy/Captain Marvel roleplay, Pierce won’t mind! He is down to clown.

Part Joe Biden, part old Steve Rogers, modern Washington is giving us hyper-competent vibes. This is a man who can finish the New York Times crossword puzzle and solve world hunger at the same time. Plus, chopping down a cherry tree? Major lumberjack vibes. This all-business king is down to give you the business, if you know what I mean. It’s sex. The business is sex.

Say Monti-chello! to Thomas Jefferson: he’s well traveled, well read, and overly confident in his abilities. With shades of Justin Trudeau and Gavin Newsom, this cocky bad boy is a demon in the sack. Jefferson once said, “power is not alluring to pure minds”, which works for us because our minds are filthy.

Hello silver fox Zaddy! You met Ulysses at Crossfit, where his stern countenance and sexy beard reminded you of George Clooney in The Midnight Sky. Grant is a taciturn former military man with hidden demons who is also a fuck machine. He has issues sure, but despite what your therapist says, you know you can fix him.