Supernatural Spins Off Its Wayward Sisters, and It Couldn’t Come at a Better Time 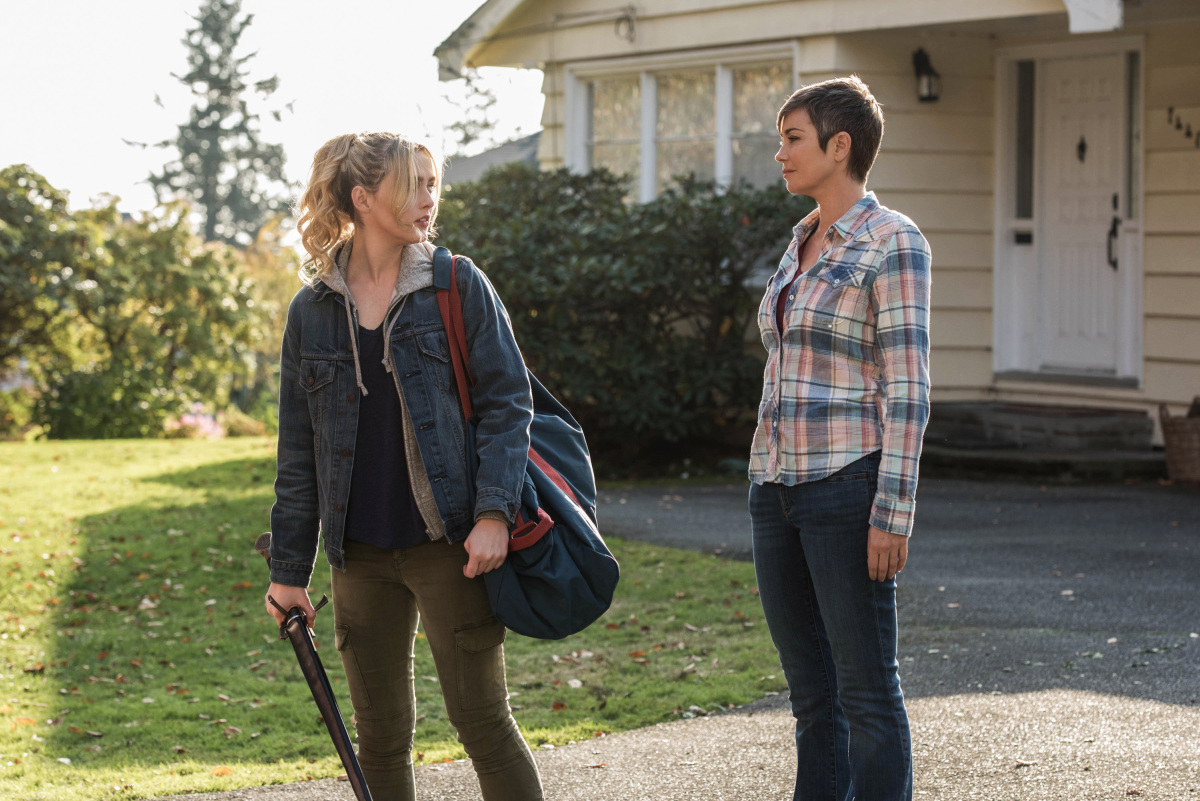 Sometimes, fans can be psychic. They can attach themselves to an idea or a character long before the “mainstream” or powers that be realize what a great thing they’ve found. Almost always, fans are fighters—warriors of a kind, forged through triumph and tragedy. We fight not just for what we believe in, but for each other. And sometimes, just sometimes, fans can take a dream and make it into reality. Tonight, when Supernatural’s midseason premiere, “Wayward Sisters,” airs, a hunter, psychic, and a dreamwalker will unite with two sheriffs and a former vampire to save Sam and Dean Winchester from another dimension. It’s something fans have hoped for and dreamed of for years, and it couldn’t be happening at a better time in history.

Supernatural tried the spinoff thing four years ago in season nine, with the ill-fated “Bloodlines.” Based in Chicago among feuding monster families, the concept fell flat with fans. It would turn out to be the episode that aired a week before that sowed the seed of what would become “Wayward Sisters.” In “Alex, Annie, Alexis, Anne,” longtime fan-favorite Jody Mills (Kim Rhodes) adopted Alex Jones (Katherine Ramdeen), a fellow trauma survivor who had been raised by vampires. One season later, Jody met Donna Hanscum (Briana Buckmaster), the sunniest sheriff this side of the Mississippi, and introduced her to the world of the supernatural. Then, Claire Novak (Kathryn Newton), the daughter of Castiel’s (Misha Collins) human vessel, Jimmy, returned to the show, coping with her own fraught past, and was sent to join Jody and Alex. When Claire asked Sam (Jared Padalecki) if Jody was running some sort of “home for wayward girls,” the passionate Supernatural fandom decided right then and there: This was the story they wanted to see. 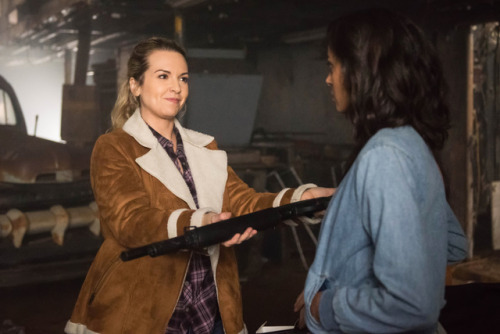 To Rhodes, who spoke to me on Wednesday, her first reaction to the idea of a spin-off was “It will never happen. I know the role I fill in Hollywood … I’m old and female, and I don’t fit the stereotype” of people that are offered a series. The fans, however, had a different idea. Adapting the lyrics of Supernatural’s anthem, “Carry On Wayward Son,” into a new rallying cry, fans coalesced around the idea of “Wayward Daughters.” As another song goes, the moment became a movement. Wayward Daughters fan accounts started, and Rhodes and Buckmaster in particular took up the “Wayward” moniker with gusto. Through Stands (formerly Creation Stands), Rhodes and Buckmaster have led three successful “Wayward” campaigns selling shirts and other gear in support of New Leash on Life, and Collins’ Random Acts. To fans, the idea of being wayward (AF, as some of the shirts proclaimed) was not just fun, but profoundly empowering.

To Rhodes, the “Wayward” movement was humbling and inspiring. “It genuinely made me reevaluate my place in this world and what we could do,” says Rhodes. To these fans, being “wayward” meant living loudly in your truth—surviving like Alex, protecting and caring for those that need it like Jody, always remaining hopeful like Donna, and turning our suffering into strength like Claire. For Rhodes, the “Wayward” movement “proved my belief that love can be louder than fear … That embracing the reality of who we are is more rewarding that trying to attain an ideal that is imaginary.” For Rhodes and the many wayward daughters, sisters, and yes, sons too, it meant, as Rhodes put it, “There is nothing more deviant than saying ‘I have worth.’”

This empowering message was a rallying cry for a predominantly female fandom, and it turned out to be a cry that the powers above heard. First, the show tested the waters in season eleven with the episode “Don’t You Forget About Me,” showcasing Jody and her girls. After checking in with our heroines in season twelve, the backdoor pilot of Wayward Sisters, penned by “Alex, Annie, Alexis, Anne,” scribe Robert Berens (a favorite writer on the show among fans) and Supernatural showrunner Andrew Dabb, was given the okay.

As Dabb explained at San Diego Comic Con, last summer: “When you can go to Warner Brothers and go ‘this show doesn’t exist yet and it’s getting this much activity,’ it only makes it look better. We want to respond to our fanbase.” Since the announcement, fans have been ecstatic to see something they only dreamed of for years truly become real. It was an amazing moment for fans, and for Rhodes: “to be told yes when you’ve been told no for so long” was, and still is, surreal. 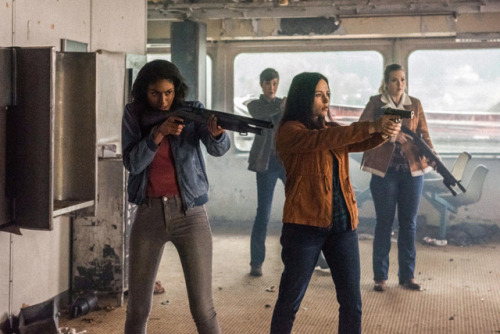 The producers have been much more careful this season laying the groundwork for “Wayward Sisters” than “Bloodlines.” In many ways, the entire season has been leading up to this episode. Two new characters have been introduced: psychic Patience Turner (Clark Backo) and Kaia Nieves (Yadira Guevara Prip), a young woman who can visit other worlds in her dreams. In the midseason finale, “The Bad Place,” Sam and Dean (Jensen Ackles), along with not-so-evil son of Lucifer, Jack (Alexander Calvert), enlisted Kaia to help them reach the alternate world in which their mother has been trapped.

Things went … badly, and Jack was sent into the apocalypse world with Mary (Samantha Smith), while Sam and Dean were sent to the Bad Place, a different world that has haunted Kaia’s dreams for her entire life and might just have bigger monsters than even they can handle. We’re talking Godzilla big. It will be up to all the women to save the boys, and the portal to another world that’s been opened near Sioux Falls looks like it could be an ongoing issue that the Wayward Women will need to keep in check.

Like Supernatural, Wayward Sisters will be about “a group of people coming together and becoming a family,” according to Dabb. However, because of that pesky portal, it won’t be a road show. The large ensemble also opens up a myriad of ways that Wayward Sisters can tell new stories in the Supernatural world that haven’t been told before. As Rhodes described it, whereas Supernatural was about family, Wayward Sisters is about home: “What does home mean? What is a family when you start from scratch?” 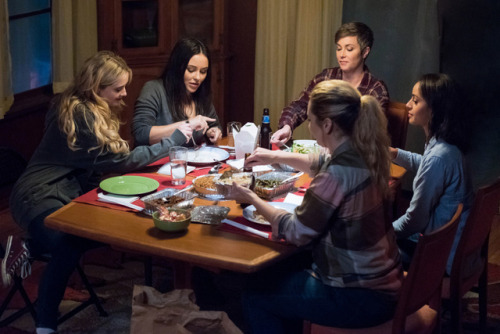 If the show gets picked up to series, we will hopefully see more of the complex lives of these women, and visits from other Supernatural faves, not just Sam, Dean, and Cas, but maybe soon-to-be-resurrected witch Rowena (Ruth Connell) or even The Darkness, Amara (Emily Swallow)—is any sister more Wayward than God’s? Rhodes would love to see many of the familiar faces on Wayward Sisters, many of which she’s worked with at fan conventions but has never acted with. The new environment of Wayward Sisters would bring out new and interesting sides of these beloved characters, according to Rhodes. And it also gives the audience a new perspective that the world sorely needs.

The decision to develop Wayward Sisters into a series came before the national conversation on misogyny, sexual misconduct, and abuse that has dominated headlines and twitter timelines for months, but the timing for this episode and this series, should it succeed, could not be better. Supernatural has run for thirteen years on stories built around men, and while the show has very often addressed toxic masculinity in different ways, it’s still been a very male narrative. Even so, it has fostered dynamic and vital female characters that audiences are hungry to see more of.

As the nation confronts the myriad ways our society shuts out and silences women, it is the perfect moment to turn the focus to a group of women, all flawed, yet all still fighting for good. Rhodes was clear that this show, and this moment in history, is important because it is not about taking from men. As Rhodes explained, within Supernatural are so many stories, even beyond Sam and Dean’s, and there is so much room for more. The energy isn’t about taking, it’s about “making more for everybody,” according to Rhodes, “so, everybody gets to play.”

Already, Wayward is giving us characters we haven’t seen on television before: a female native American lead in Kaia, as well as adding more diversity with Patience. Additionally, it’s empowering to see actresses who have been passed over by networks before for their age, like Rhodes, taking the lead, as well as characters that have struggled with the same body issues every woman has, like Donna.

Wayward Sisters also boasts a quick rising star in Newton, whose 2017 slate of series and films included award winners Ladybird; Three Billboards Outside of Ebbing, Missouri; and Big Little Lies. The combination of these actresses, characters, and this moment in history promises to be electrifying. They are not defined by their relationships to men, but what they have been through and the decision their wayward souls make to carry on. The very existence of this episode and this story is the result of recognizing the power of the female characters, and women and listening to the female voices of this fandom that hoped to be heard. Sam and Dean have started a story of heroism and family, one that these wayward sisters will rise up and carry on.