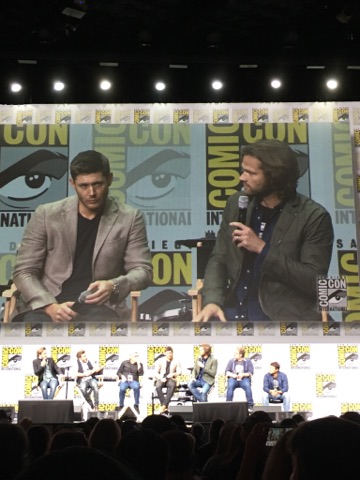 Perhaps no show has spent more Sundays in Hall H of San Diego Comic-Con than Supernatural, and one might think that things could get a little rote after over a decade of appearances. Whoever thought that would be wrong. The packed panel kicked off with a live performance by Kansas of the show’s anthem “Carry on Wayward Son” while the crowd was surrounded by giant screens showing a recap of the entire last twelve years of the show. It was the kind of epic presentation usually reserved for major movies and it was absolutely thrilling. The stars and producers of the show had a hard act to follow, but still managed to pull off a few surprises. After the panel, I sat down with the cast and showrunners to discuss the coming season and how Supernatural continues to endure.

Executive Producer Robert Singer explained the theme of the season: if last year “was about the family coming together, this year it’s the family trying to deal with getting blown apart.” Singer’s co-showrunner, Andrew Dabb agreed. “‘What is Sam and Dean’s conception of family now?’ By which I’m talking about not only Mary, but Castiel … season thirteen really blows that up in a pretty dramatic way,” Dabb said. Dramatic is one way to describe the season twelve finale, which saw the death of longtime Winchester frenemy Crowley (Mark Shepperd) as well as the demise of the Winchesters’ favorite witch, Rowena (Ruth Connell). The most shocking death, however, was that of fan favorite angel Castiel, played by Misha Collins.

Despite being slightly stabbed to death through the heart by Lucifer, Collins joined the Hall H panel and will be returning as Castiel next season. Though Cas is going to stay dead for “a little while,” we will find him “in a new environment that’s not what you’d expect … I have no idea how we’re going to shoot it, it’s gonna be super weird,” Collins said. Cas, however, won’t be alone in this strange new world. He will be joined by a “new-ish” character played by “a really amazing actor. So we’re super lucky to have this guy. Very good looking as well,” Collins hinted. This could be related to a tease from Singer that “we have a character … that’s coming back, that’s not in the form of the character we knew before.”

It sounds like Cas is doing okay, despite the death. Sam and Dean? Not so much. The season will pick up exactly where it ended, with Dean reeling from the loss of Castiel as well as the boys’ mother, Mary (Samantha Smith) who pulled Lucifer with her into an alternative dimension to save the boys. “There’s too much for him to process from an emotional standpoint of what just happened,” Jensen Ackles said of how his character handles the grief. In true Dean fashion, “he’s gonna try to bottle it up, and … eventually it’s going to come crashing out.” Jared Padalecki (Sam) said of his on-screen brother, “I think Dean is very clearly pushing something down. Not wanting to talk about it, doing the classic Dean bit.” As for Sam, he “didn’t have the same relationship that Dean did with Cas, but he did love Cas and vice versa,” Padalecki said, and while Sam is “heartbroken,” about Castiel, he is much more worried about Jack, the devil’s son who was born in the finale and created the rift Mary and his father disappeared into.

The devil’s lovechild is going to be a major source of tension for the boys. Sam very much wants to nurture the little guy to be good, whereas Dean’s attitude is, as Ackles put it, “He’s half Satan! Let me shoot him in the face.” Sam, though, sees a lot of himself in Jack. “Sam to a degree was meant to do evil,” Padalecki said. “I think he’s trying to justify his own existence by helping nurture Jack to use his powers for good.” Dabb mused on the many conflicts Jack will create. “Do they really care about this kid or are they using this kid?” Sam wants Jack to help the boys get through that dimensional rift to Mary, but Dean thinks she’s already dead. Mary isn’t dead, however, and we will see her in the alternate world along with some other characters we may have lost in the past.

Speaking of other worlds, there was much discussion of the upcoming crossover with Scooby Doo. Yes. In case you didn’t hear, the Winchesters and Castiel are going full animation and the cast and crew could not be more excited. Dabb explained that the idea of doing animation on the show has been batted around the writer’s room since he started on the show in season four, but it never quite worked. But when his friend, Jeremy Adams (who co-wrote the episode with Jim Krieg) pitched the idea, a lightbulb went off. Scooby Doo is owned by Warner Brothers, the makers of Supernatural, so the rights weren’t a problem. They just had to work out the logistics since animation takes much longer to create than a typical one-hour drama. The episode was written last winter and as soon as the show was officially picked up for season thirteen, work began with Padalecki, Ackles, and Collins recording their voice parts last spring. “When we did the voice over … you could feel the energy inside the recording booth,” Ackles said. Collins described doing the voice work as a “pinch me moment” and assured us that this is a full, bona fide episode of Scooby Doo inside Supernatural. The crossover will air next year as episode sixteen, but something just as exciting will hit before that.

Episode ten, which will air in January, will serve as a backdoor pilot for a long awaited spin-off, Wayward Sisters. Written by Dabb and Robert Berens, the show will focus on Jody Mills (Kim Rhodes) and her adopted family of friends and girls, including bubbly Sheriff Donna Hanscum (Briana Buckmaster), wannabe hunter Claire Novak (Kathryn Newton) and former vampire Alex Jones (Katherine Ramdeen), as well as a new character we are set to meet in episode three on this season, Patience Turner (Clark Backo). Patience is the psychic grandchild of a season one fan favorite, Missouri Mossley (Loretta Divine), who will also return in the episode.

While Wayward Sisters will, according to Dabb, “have the DNA of Supernatural” in that it is “a group of people coming together and becoming a family,” it will be different in many ways. Singer explained: “it’s not a road show the way Supernatural is,” and the kickass women will stay in one place to deal with “a kind of a ‘hellmouth’ situation that happens.” The idea of this spin-off has been percolating with the writers and fans for a long time, since Claire Novak was sent to live with Jody and Alex in season ten. The fans’ support of the idea—which has been vocal since Claire left for Jody’s in season ten—was instrumental in selling the show to the studio and network, said Dabb. “When you can go to Warner Brothers and go ‘this show doesn’t exist yet and it’s getting this much activity,’ it only makes it look better … To see people pick it up on their own was really gratifying to us.” Those fans are now elated, as are the creators that describe the cast and story as “amazing.”

From a rock concert to Scooby Doo to a female-led spin-off to what sounds like a heart-wrenching start to lucky season thirteen, the Supernatural cast and crew kicked it in the ass big time. It’s going to be a tough wait for all the new season has in store, but until then, we carry on.