Do Not Party On: Wayne’s World 3 Script Rumors Are a Hoax 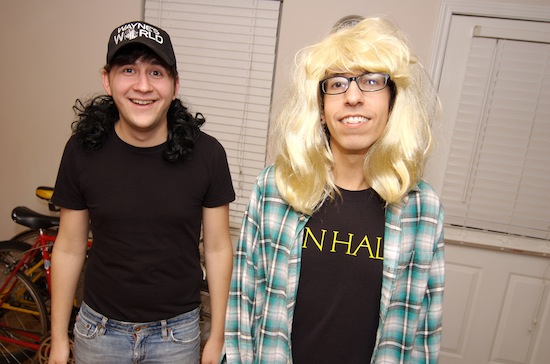 There’s little we want more in life than a new Wayne’s World sequel. So when we saw that Mike Meyers had supposedly finished the script for one, we got our hopes up just like anyone else might. Unfortunately, it wasn’t meant to last. As it turns out, the whole thing’s apparently a hoax. Talk about depressing.

The story popped up on JoBlo.com, among others, that the long-rumored Wayne’s World 3 was one step closer to reality. The articles all cite an email from Entertainment Weekly reporter Laura Hertzfeld. A lot of people jumped at the news because it seemed to be from a reliable source, but when Ethan Anderton from FirstShowing.net tried to confirm the story, he was told by another EW reporter, Anthony Breznican, that Hertzfeld wasn’t even aware that the email existed.

It seems that our hopes of a third Wayne’s World in the near future are dashed for now. The silver lining to this could be that the wave of excitement from fans over this news could show Meyers, co-star Dana Carvey, or anyone else who could make a Wayne’s World 3 happen, that it’s a viable option.

Back in March, Carvey appeared on Conan and spoke of another Wayne’s World, but it was right after Will Ferrell made his announcement for Anchorman 2. He also says it’s going to be a puppet show and a mall tour, but there might be some kernel of truth there. We’ve included the video from Conan below. Judge for yourself if there’s any sincerity to it.

(via FirstShowing.net, image via This Is A Wake Up Call)