A.k.a. the bad-ass sci-fi and fantasy tools that we all wish we owned

In no particular order, here are my personal favorite weapons used by bad-ass women in genre fiction. Whether you’re fighting a dragon or a zombie or a literal God, you have to bring the right tools, and these are the best I’ve seen wielded by a collection of awesome lady characters of fantasy and science fiction!

I already gave Wonder Woman’s lasso a default place in the gif above (image via Giphy); here are eight more picks that might not spring to mind as readily.

It seems like every Resident Evil game has a flame-thrower. When it comes to fighting zombies and mutated monsters, “kill it with fire” seems an appropriate motto. But fire can be electric, too! And Claire Redfield’s the only hero who gets to use this experimental Umbrella Corporation gun called the Spark Shot; it’s a battery-powered blaster that’s used in only one specific boss fight. It’s too bad it doesn’t seem to work that well on other enemies, because it’s one of the coolest weapon ideas in Resident Evil. Here’s hoping that Resident Evil 2 remake will make this blaster look even better!

(gif via The Cynical Slayer)

Alanna’s sword “Lightning” in The Song of the Lioness Quartet 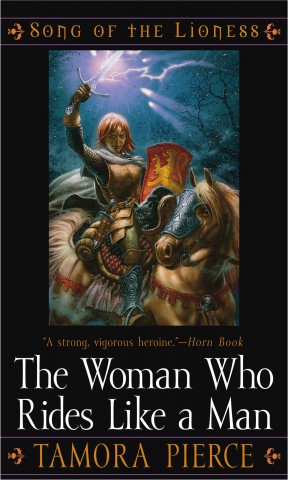 I can’t use a gif for this example, because Lady Knight Alanna is a hero in The Lioness Quartet book series by Tamora Pierce, which lacks a screen adaptation (and that’s a damn shame, by the way). This was one of the first “magical sword” stories that resonated with me as a young girl, primarily because it’s one destined for a woman’s hand (unlike Link’s Master Sword or King Arthur’s Excalibur). Plus, Lightning getting broken and repaired by Alanna over the course of the series makes for a good background metaphor in a story about redefining and rebuilding oneself.

This list would be incomplete without a mention of what might be the most recognizable (and perhaps the least realistic) warrior woman weapon ever: Xena’s metal ring, which does variable damage depending on the day. How sharp is it, exactly? Well, it can cut ropes and damage stones, but it only ever seems to knock people out if they get hit with it, and it always seems to richochet right back into Xena’s hand without her getting any fingers sliced off. How does that work? Ehhh, don’t worry about it.

Hey, I never said all of these warrior women had to be good gals, did I? She-Ra’s sword is pretty cool, too, but as far as magical weapons designs go, she’s far outpaced by her adversaries here. Evil-Lyn’s one of the savvier villains in the He-Man universe (now, that’s a low bar to clear), and her talon-decked, orb-topped magic staff has endured in every adaptation of her design. What’s weird is that she barely ever got to use it in the original series, but it does get a lot of well-deserved action in the reboot episodes.

Bayonetta’s foot-pistols, as well as the reams of other nifty deadly accessories that she can collect, might take the cake if she didn’t also have magical hair. This is the game’s most campy aspect, and I go back and forth about whether it’s stupid or sexy or subversive or what. Given that the second game seems to imply it’s her body hair rather than the hair on her head, I’ll give it a pass for unabashed weirdness.

The best weapon in Sarah Connor’s massive weapon stash has to be her own determination and stubbornness. She’s a smart one. But also that assault rifle’s not too bad either.

There are so many female gundam pilots in fiction that I could pick for this item (by all means, explore this list), but Mako Mori’s one of the best known. And the sword in Pacific Rim that only Mako seems to know about is definitely a unique triumph for lady gundam pilots everywhere. I’m going to go ahead and call that “Mako’s sword.”

Lastly, a shout-out to warrior women who are based on historical figures and therefore can’t qualify to make this fiction-themed list! Joan of Arc has wielded an impressive collection of swords and spears in the various adaptations of her story, and who could forget that part at the end of Mulan where our hero uses a fan as a disarming method? So cool.

Okay, now tell me your favorites!