Mars Meteorites Reveal Red Planet Was Once Home To Warm Water, Could Have Sustained Life 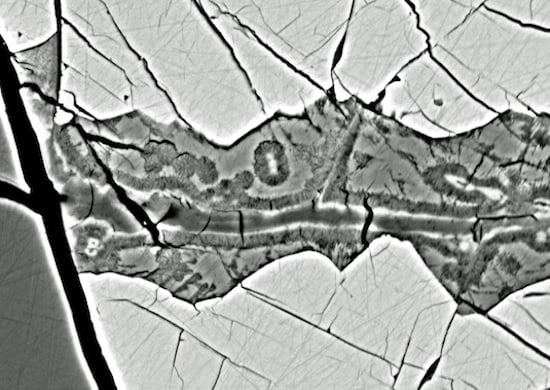 It’s no news that the surface of Mars was once home to water, but scientists may have just found more evidence that that same water could have once been teeming with living creatures — or at least supported enough of them to prove we’re not alone in the universe. Researchers from The Open University and the University of Leicester have found evidence in meteorites from Mars that the water on the Red Planet may once have been warm enough to support life.

Researchers can estimate the heat of at least some of the water that was once on Mars by looking at the sorts of minerals that took shape in the presence of that water. In a reminder that Curiosity isn’t the only one exploring the possibility of past life on Mars, that’s just what scientists here on Earth did, examining piece of the Martian landscape that were broken off of the planet only to arrive on earth as meteorites. Chemical analysis of the rocks found both clays and carbonates, indicating that at one point, the water on Mars contained a great deal of dissolved carbon dioxide, so if anything did live on Mars, it would have been nice and comfy in the bubbling, warm, spa-like waters of the planet.

A new study of meteorites originating from Mars shows that the planet was home to water at temperatures upwards of 50 degrees Celsius, and probably got as hot as 150 degrees Celsius. While that might be too hot for you or I to handle, it is a temperature that supports life here on Earth. Sure, the life tends to be microbes that live in undersea thermal vents, but life is life, and as we look for signs of it on Mars, we’ll take what we can get.