Iron “Blueberries” on Mars Could Be Clues To Ancient Microbial Life 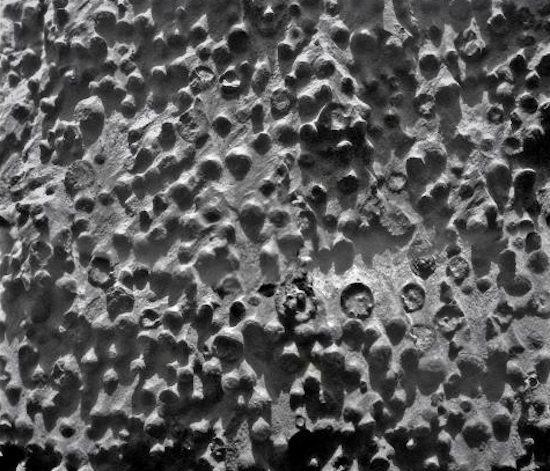 The above picture may not look like much, but it could be a huge deal. The photograph, taken by the Opportunity Rover at Mars’ Cape York site, shows iron spherules that researchers commonly refer to as “blueberries.” Similar formations are found here on Earth. The catch is that, here, they are formed with help from microbial organisms, suggesting that these unassuming iron marbles could be a telltale sign of ancient life on the red planet.

Typically just a couple millimeters across, iron blueberries are a pretty standard part of the Martian landscape, found on the ground of the Cape York site where Opportunity is doing its research or embedded in rock. They bear a distinct resemblance to the “Moqui marbles” found around the American southwest. Ranging in size rom BB pellets to cannonballs, Moqui marbles are not unlike geological M&Ms, consisting of a thin iron shell filled will sand.

A study published earlier this month in the journal Geology found strong evidence that the marbles are not a purely geological oddity, but were formed with an assist from microbes. That finding is a strong suggestion that the Moqui marbles’ Martian cousins may be a good candidate for indicators that Mars once sustained microbial life.

The blueberries recently discovered by Opportunity — which is still chugging along after eight years, and with less fanfare than the rover-of-the-minute Curiosity — are in an area not known for its iron content, but for the possibility that it may have clay deposits, suggesting it may once have been a site for flowing water. Between those two findings, Opportunity could certainly be in worse places to look for ancient martian microbes. The search for those signs is still akin to looking for a needle in a haystack, of course, but the haystack may have just gotten a lot smaller.

(via PhysOrg, University of Nebraska-Lincoln, image courtesy of NASA)