Things We Saw Today: “The Ship of Theseus” Scene From WandaVision’s Finale Has Perfect Memes 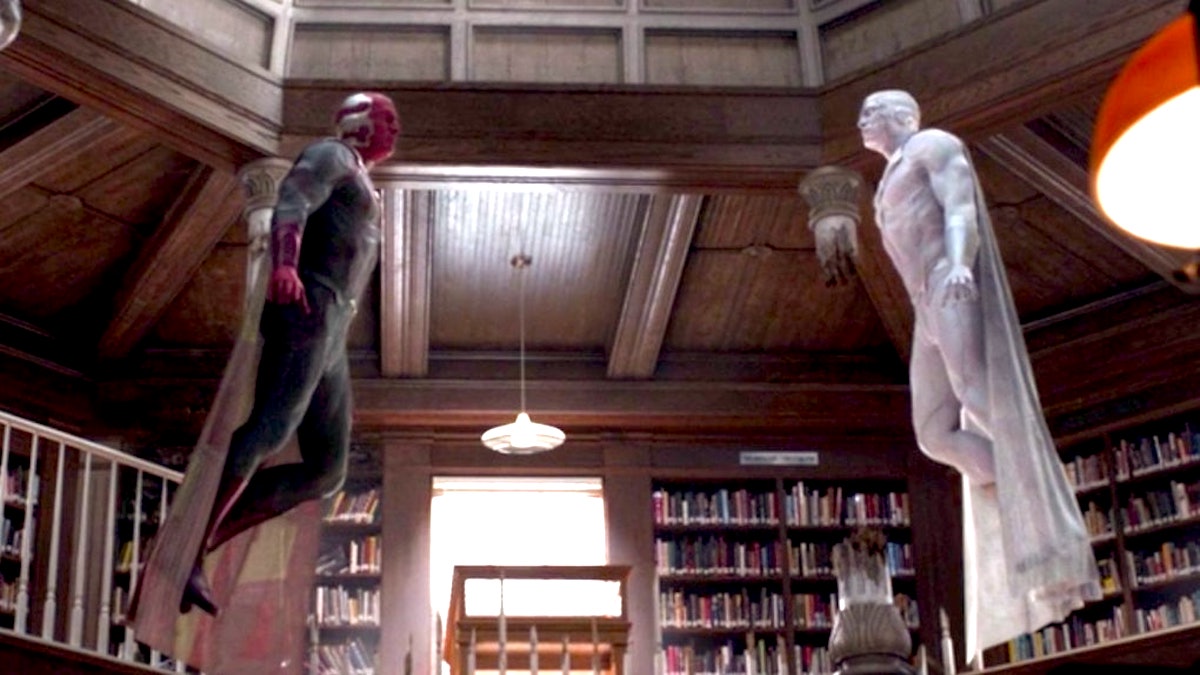 ***Spoilers for the WandaVision finale***

One of the best moments in the WandaVision finale came when Wanda’s Vision took on the “evil” version of himself, White Vision, ultimately making White Vision pause with a philosophical thought experiment called “The Ship of Theseus.” Not only was this scene wonderfully rendered and played by Paul Bettany (as both Visions), but it has sparked a host of appreciative memes on social media.

“Have you heard of the Ship of Theseus?” pic.twitter.com/c4vPqfcjIX

I predicted that we’d be seeing a lot of Vision-on-Vision action in the finale, and this was somewhat the case: the two spend a while duking it out. They’re evenly matched in terms of powers and strength, however, so that neither can get the upper hand. While White Vision is driven only by his programmed directive to destroy Vision, Vision has the emotions and experience of his time with Wanda and their children fueling him. Thus he will do everything in his capacity to save them, and he soon realizes the key to stopping White Vision isn’t through violence, but by undertaking the most Vision-y of tasks—processing and thinking and theorizing.

“You are familiar with the thought experiment ‘The Ship of Theseus’ in the field of identity metaphysics?” Vision asks. “Naturally,” White Vision returns. And then they’re off, debating back and forth instead of punching each other. By the scene’s end, White Vision, memories restored, flies off since they are now agreed that he is also “Vision,” whom he has been tasking with destroying. Vision essentially defused White Vision with an old-school dose of the metaphysics of identity.

“The Ship of Theseus” is an ancient thought experiment, pondered throughout the centuries by names you might recognize like Plato, Plutarch, John Locke, and Thomas Hobbes. The question at hand is whether an object (in this case the theoretical ship of the mythic hero Theseus) that has had all of its components replaced remains the same object as the original. Hobbes later added to the experiment by asking if the original materials were then used to build a second ship, which, if any, would be the original ship of Theseus?

The brilliance of this scene on WandaVision was wide-ranging. First of all, it introduced millions of people to a many-centuries-old paradox and turned an explosive confrontation into a philosophical logic-off. Secondly, it was a hard swerve away from the bombastic final fight scenes we’ve come to expect from the MCU. Wanda and Agatha’s airborne witchy battle throwing magical energy balls at each other fit that mold. But this was something new.

The Vision vs. Vision mind games were a way to resolve the conflict that was also perfectly in character. As it turns out, the inspiration here appears to come directly from the comics:

The Ship of Theseus conversation between the two Visions is actually pulled from the comics. Didn’t know about this!

And fans really loved this different approach to a superhero/villain showdown.

Batman vs. Superman would have been infinitely better if they had debated Ship of Theseus instead of screaming MARTHA at each other

Of course, on social media, the “Ship of Theseus” memes were quick to multiply.

I see ship of theseus is trending so I have to postulate this pic.twitter.com/I5kIz9BFgQ

Having a super comparing
expensive yourself to the
cgi fight scene ship of theseus pic.twitter.com/IIO5Dt0WhV

That Ship of Theseus convo got me like #WandaVision #WandaVisionFinale pic.twitter.com/j5cRCnj5UA

Cartoon break: Ship of Theseus. With thanks to Dan Slott @DanSlott for the inspiration. Enjoy! #ShipOfTheseus pic.twitter.com/LkGAENNuyl

Have you heard about the ship of Theseus? pic.twitter.com/AW4hAkb2Mp

This scene was so quintessentially Vision that it rang true and struck all the right notes. It’s difficult to imagine many other characters in the MCU pulling this off. If you want to further explore the complexities of the Ship of Theseus conundrum and how it’s debated on the show, I recommend this explainer from Josh St. Clair at Men’s Health. St. Clair starts out by observing that most WandaVision viewers “likely weren’t expecting two floating Visions to hold seminar on ancient Greek philosophy.”

Yet perhaps we should have expected such a turn from the Vision(s). I won’t make this mistake again, and it’s hard not to see how future battles will disappoint after this salvo.

cw // #WandaVisionFinale #WandaVision SPOILERS
.
.
.
.
.
The Ship of Theseus scene is literally the most Vision thing to ever exist, change my mind pic.twitter.com/SchfuWGh6q

“You are familiar with the thought experiment ‘The Ship of Theseus’ in the field of identity metaphysics?”

I cannot express how much I LIVE for Vision being Vision, and this is the most Vision thing that has ever happened

This logic-based showdown will always be a standout moment from WandaVision for me and one of my favorite takeaways from the series. The other? You guessed it, that line from episode eight. Now, what if there were some way to combine them that even Vision would approve …