Spoiler Alert: Breaking Bad Fans Bought Out Space in An Albuquerque Newspaper For Something Special

Somebody's not having an A1 day. 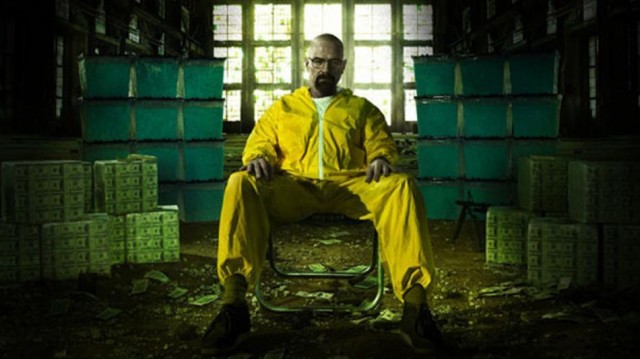 If you’re trying to stay completely pure of any season finale knowledge, then massive spoilers for the final Breaking Bad episode,”Felina,” abound here. But if you up to speed, and you’re like the small group of fans who spent actual money to make this clever joke in a local New Mexico newspaper, then you’re for sure going to enjoy what’s after the jump. 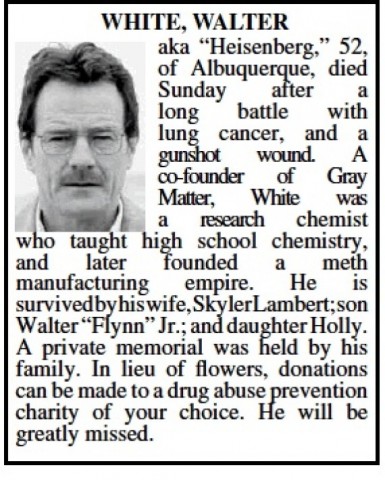 That’s right, they ran an obituary for Walter White, who according to this died “after a long battle with lung cancer, and a gunshot wound.” Way to bury the lede there, guys!

While the obit is much more sympathetic than a real article for the death of a criminal kingpin would probably be (check out the New York Times’ story on the death of Al Capone, for example), there’s also a lot of great little details that tie into the events of the show. For example, Skyler’s listed under her maiden name, which we know she took on after “Granite State,”  and White is referred to as a co-founder of Gray Matter. It also recommends that mourners made donations to a “drug abuse prevention charity of your choice,” which is a very nice touch.

On the negative side, we do sort of feel bad for all the people who might have gotten spoiled by seeing this unexpectedly in their paper, especially because the only people who go into the obits section are the people looking for a specific one. Can you just imagine trying to find the death notice of a loved one and getting told the ending of a show you’d probably been waiting to see in the process? Huge bummer, man.

(via Huffington Post, images via Breaking Bad and The Albuquerque Journal)