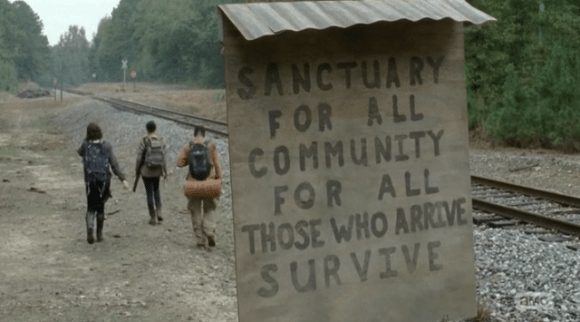 There was some major television to be had last night, Cosmos, the True Detective finale, Once Upon a Time. In case you had to make some tough calls, Geekosystem’s Victoria is back with a new recap of AMC’s The Walking Dead for you to check out.

Last time on The Walking Dead: Daryl and Beth bonded over their feelings and stuff. Then they set a house on fire. Maggie, Sasha and Bob got stranded together, as did Lizzie, Mika, Carol, Tyrese, and Judith, who are walking towards that Terminus place (and for real, I don’t remember this happening).

We open on Bob, who does not look as happy to be alive as he was about two or three episodes ago. He’s also wandering around completely alone in his own sad apocalypse music video for some reason.

Then a truck and a motorcycle drive up — and  Glenn and Daryl are driving them. Oh. This is a flashback to when they found Bob, back before they had to abandon the prison. They ask him the three questions that Rick first asked that creepy lady at the beginning of the season, and they appear satisfied with his answers. Bob doesn’t ask any questions back, because he’s just happy to be with people.

After the credits, we’re back to present time. Bob is with Maggie and Sasha, stabbing zombies in a thick, horror movie-style fog. Sasha saves everyone’s hide, because she’s the best. There’s a brief scare when they think Bob’s been bitten, but the walker couldn’t break through the bandage, so everything is presumably fine. Moral of the story: when you’re in a zombie apocalypse, get horribly injured first.

Meanwhile, Daryl is teaching Beth how to hunt and track. She’s doing pretty well, riiiight up until she steps on a bear trap and (obviously) hurts her foot badly. Whoops.

Back with Maggie’s gang. Maggie wants to move, but Sasha and Bob tell her to wait until the fog clears, since they only have six bullets left and no compass.

Daryl and Beth make it to a cemetery, but Beth needs to sit down — her foot is still injured. Naturally Daryl offers her a piggyback ride because oh my god make out already. Beth comes across a gravestone that says “Beloved Father” and pauses, so Daryl picks some weeds and lays them across the grave, and then they hold hands. 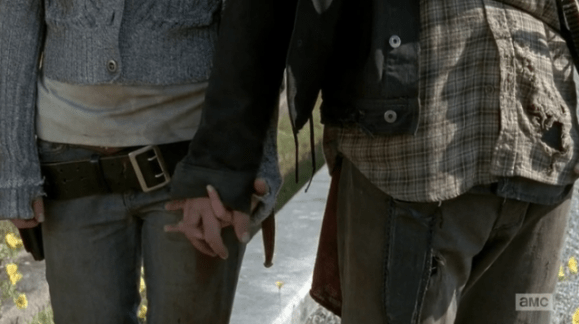 Something awful is definitely about to happen to one of these characters, isn’t it.