The Walking Dead Recap: Welcome to Your Doom 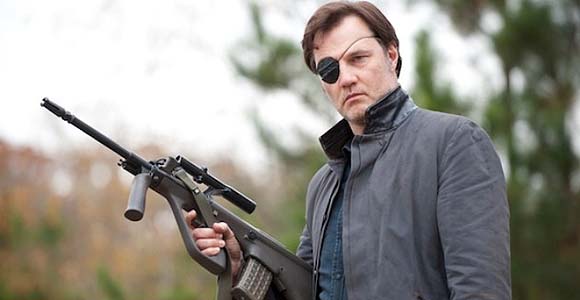 What can I say about this episode of The Walking Dead? Well, it was the season finale…

Last week I wrote, “Now who gets the honor of killing The Governor next week in the finale?” Boy do I have egg on my face.

“Welcome to the Tombs” tried something new. The episode opened with a very video game-esque first-person shooter style shot from Milton’s perspective. We skipped The Governor confronting him about burning the walkers and straight to beating the hell out of him in the same room Andrea is being held captive in. It was a tense scene but I knew right away Milton wasn’t going to get his chance to kill The Governor simply because it was too early in the episode. Instead, The Governor instructs Milton to remove those ghastly tools we saw him so methodically lay out a few episodes ago. In doing so, Milton drops them all on the floor but neglects to pick one up. This is what we call foreshadowing. I’ll make a point about it later.

Milton makes his move against The Governor but fails miserably and is stabbed repeatedly. Not enough to kill him right away though. No, he gets to lay there on the floor and wait to become a walker so he can then kill Andrea as The Governor rubs his hands together like the evil villain he is. And here’s my first issue with this episode.

Look, I’ve never been stabbed in stomach. I’m sure it’s no picnic. But considering Milton knew when he turned, Andrea would be lunch, couldn’t he…I don’t know…use some of that adrenaline running through his veins to crawl five feet across the floor to pick up that pair of pliers for her? Nope. Too simple. Instead, Andrea has to kick off her boots and socks and try desperately to pick them up with her feet.

Back at the prison, the survivors are packing up for what appears to be their escape pre-Woodbury attack. We don’t see any real emotional resonance to Merle’s death except for a slight nod to his sacrifice. We also don’t see Rick apologize for almost getting Michonne killed until Michonne herself brings it up. But she totally understood the decision making process so there’s apparently no need to be pissed off at Rick. Meanwhile, Carl is a grumpy teenager pissed off about nothing.

The Governor has Woodbury residents riled up, telling them the prison residents were responsible for all the dudes Merle killed last week. They head off for the major attack we’ve been building up to all season. They blow up the guard towers, shoot a bunch of walkers, and then realize no one is shooting back. Upon deeper investigation, it appears the prison has been abandoned. Then a few smoke bombs go off in one of the dark hallways and walkers attack. On the way back outside, Glenn and Maggie open fire. But I’m pretty sure no one got shot. That is, until one teenage straggler intent on running for his life, stumbles upon Hershel and Carl in the woods. And I called it about two seconds before it happened – Carl shoots him point blank even though he was giving up. Makes sense, technically, but it’s a turning point for Carl.

Suffering what must have been an annoying defeat, The Governor flies off the handle and shoots almost everyone from Woodbury who took part in the prison attack. At least Martinez knows he’s insane now. And then he rides off into the proverbial sunset and that’s a wrap on The Governor for Season 3. What. The. Fuck.

One woman survives by playing dead, however, and the prison group finds her. She helps them gain safe access to Woodbury, which Tyreese and Sasha had been guarding. Since no one but older residents and children are left, they easily gain access to the torture rooms and find Milton and Andrea. Milton had since turned into a walker and was dispatched off-screen by Andrea but not before he took a huge chunk out of her neck.

Are you flipping kidding me?!

That’s it. We know there’s no way back for Andrea and after a few short moments of reflection she asks for a gun so she can do the job herself, i.e. shoot herself in the head before she turns. Michonne stays with her while she does the deed and that’s the end of one really annoying storyline. The last we see is the remaining Woodbury residents being welcomed to the prison.

Am I annoyed at this episode from a comic readers’ perspective? Yes, absolutely, the character of Andrea was completely wasted (I’m convinced Carol is the new Andrea). But I’m more annoyed from a TV viewers’ perspective. Why? Because this episode failed to live up to expected rules of fiction. While Chekhov’s gun isn’t an absolute, I am constantly annoyed when it’s ignored. The Governor laid out torture weapons and never used them. Not that I wanted to watch a torture scene but it wasn’t even implied they were used off-screen. You could argue they were laid out specifically for the escape but I’d say that’s pretty lame. And then you have the much-lauded battle that barely was and The Governor completely missing his comeuppance. So, great. Another season in which they have to face-off, or at least be wary of, the same villain.

At this point I’m 99% sure I’m not going to be watching next season, what about you? As much as I love the overall themes and story, I’m tired of being almost consistently disappointed. Let us know what you thought of the new episode in the comments!