… or “That costume is impractical” (to which I point to the many athletes who participate in sports and wear considerably less… — Erik Larsen (@ErikJLarsen) March 14, 2015

… because bulky clothes actually hinder movement). And in any case–these are lines on paper. People can’t fly in the real world…

…or climb walls or spin webs–the notion that everything has to strictly adhere to the physical rules we’re bound by is absurd. — Erik Larsen (@ErikJLarsen) March 14, 2015

Simply put: Erik Larsen, creator of Savage Dragon and one of the founders of Image Comics, does not like the Wonder Woman costume revealed last week. 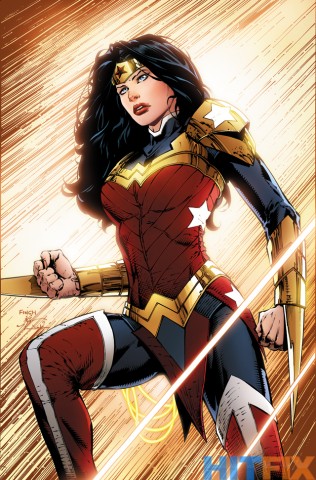 And he is, of course, entitled to his opinion on that end (I’m not a huge fan of the look either). But many took issue, not with his opinion on a costume, but with Larsen’s harsh words about his proposed reasoning for the change — fans themselves.

Recent months have seen DC Comics’ Batgirl get a new creative team and costume in an effort to revitalize the character and Marvel’s Spider-Woman getting a new look as well, perhaps because of the massive backlash to one of their variant covers.

Larsen certainly believes that’s the case; but were these choices made simply to please vocal comic book fans “bitching,” as he later elaborated, online? Or were they made to appeal to a different audience than the one the publishers had been marketing to as long as we can remember (18-34 year old males) and foster new readership?

Larsen’s twitter conversations spanned overnight, also mentioning his dislike of the costume redesigns for Ms. Marvel, Kamala Khan (a costume which is incredibly important to both her backstory and character development); Captain Marvel, Carol Danvers (a direct reference to the outfit worn by the male Captain Mar-Vell); and decrying Spider-Woman’s new fitted motorcycle jacket as a “potato sack.” Even after I posed the question, however, Larsen never responded to how he felt more practical superhero outfits harmed comic buyers at large. Specifically, as he mentioned, the only ones really speaking up were the smaller number of fans he feels use the internet.

But it must be stated again, if this were just about Larsen’s opinion on the costume design itself, I don’t believe anyone would be up in arms; but he veered into specifically offensive and tone deaf territory, blaming “[l]argely vocal critics on the web who get in a tizzy every time a woman character looks attractive,” which completely misses the point of most critiques and is the fallback defense whenever someone challenges the male-gaze norm of superhero comics.

Larsen did point out that “[p]eople seem to assume that I’m championing sexy costumes and curvy women–this was never stated,” though many inferred as such from his comments. He also said, “The goal now seems to be to create something which an artist can’t make look sexy.”

In a series of tweets, Marvel’s Steve Wacker let the world know his side of the Captain Marvel redesign:

Changing Cap Marvel’s outfit was absolutely not due to fan reaction. It was something I’d wanted to do for years. @kellysue suggested @McKelvie and he delivered the basic look before I had hung up the phone. I loved it straightaway. The idea that the costume change was implemented because of a “vocal minority” is incorrect.

There were a lot of reasons to chang[ing] the costume. One big one was that I wanted my daughter to be able to dress up as Captain Marvel. As editor I was in a position to make the change I wanted. That’s the job and it’s what we’re paid to do. Luckily Axel [Alonso], [Joe] Q[esada], [Tom] Brev[oort] agreed. We certainly got some folks upset with he costume change – mostly older fans – but that happens every time you do anything.

I get that not every design is popular, but this one seems to have staying power. [I]t’s a very old school, classic super hero design. I’d hate for someone uninvolved with the decision to give the impression our artists were catering to some online “minority.” Blame me. I should add that Quesada also helped with direction on the design and helped us get it approved corporately. It’s a risk changing a longtime character design & I’m proud to work for a company that embraces risks. (Except of my “WackerMan” pitch)

In a now deleted post, another artist weighed in on the Wonder Woman costume. J Scott Campbell wrote on Facebook:

I rarely comment about comic book industry matters on my personal FB page, but I gotta say, shoulder pads, especially big bulky metal ones NEVER look good on women. Everything about them is unfeminine and lacks style. No grace to this approach at all.

And on a side note, I find the continued knee-jerk reaction to internet message board critics demands to keep female heroines covered from head to toe in fabric an overreaction. She’s an Amazon Warrior, she’s NOT in the *Taliban!

And after some rightfully angry feedback to those words:

(*Well, apparently the Twitterverse is flipping out over my comparison of her coverage to being in the Taliban. It was a flippant and off the cuff exaggeration. Figured that was obvious, but I suppose you can’t be surprised these days. Also, my issue wasn’t with “women wearing armor,” it was with the bulky clunky shoulder pads. Again, a detail lost over there on Twitter I guess.)

“I’m very happy not to be drawing this. Political correctness by committee doesn’t interest me,” he also wrote, referencing the “pressures of corporate conglomerates” and that “[t]here are tasteful and non-trashy ways to have some exposed skin without resorting to this mess. Everyone is afraid of everything these days and my god does it show! … This is how the angry side of the feminists are reacting to my critique of the costume on Twitter. Why exactly did my criticism of a bad costume design turn into an anti-feminist attack… Oh right… ‘The Internet’.”

Campbell also got into a lengthy discussion on Twitter but neither creator specifically referenced editors who forced them into a certain artistic direction, and we haven’t sat in on any editorial meetings lately so we can’t say with any certainty why these changes are made but for the most part reasoning is always going to be to gain readership. That is, after all, the main direction of comic publishers.

To which we think it’s probably helpful to remind everyone that there is a significant difference between a “sexy” costume and a “sexualized” costume designed solely for the male gaze and a very specific type of consumption by the reader.

Other industry folks got into the conversation over the weekend as well:

I like Erk a lot, but this is embarrassing.

Hey, all you women who are now reading comics, quit being a vocal minority while dad is trying to sleep! — GAIL SIMONE (@GailSimone) March 15, 2015

I can never understand why it’s so difficult just to say, “this isn’t to my taste, but I am glad others like it.”

There are still a sizable number of people in the industry who see women as intruders. I don’t think Erik is one of them. But they exist. — GAIL SIMONE (@GailSimone) March 15, 2015

I recall being called variations of “vocal minority,” sometimes nicely, more often not, many times when I started in comics.It’s horseshit.

The absolute last thing I want in my mind when I’m drawing Batgirl is whether some gross dinosaur is getting turned on looking at it — Cameron Stewart (@cameronMstewart) March 15, 2015

It looks like Spider-Woman #5 is getting a second printing. So glad to see people sticking around post-Spider-Verse (or jumping on with 5).

Writer Kieron Gillen wasn’t having any of it, either:

I hold the controversial position that when designing costumes you should consider things other than “can I wank to this?”

Then there was Chip Zdarsky just bein’ Chip:

Really, though, I just want to make the kind of comics I wouldn’t be embarrassed to read in public.

And well, we can’t be sure what this is in reference to but we’ll leave it here anyway: