And Arrow and The Flash have been renewed! 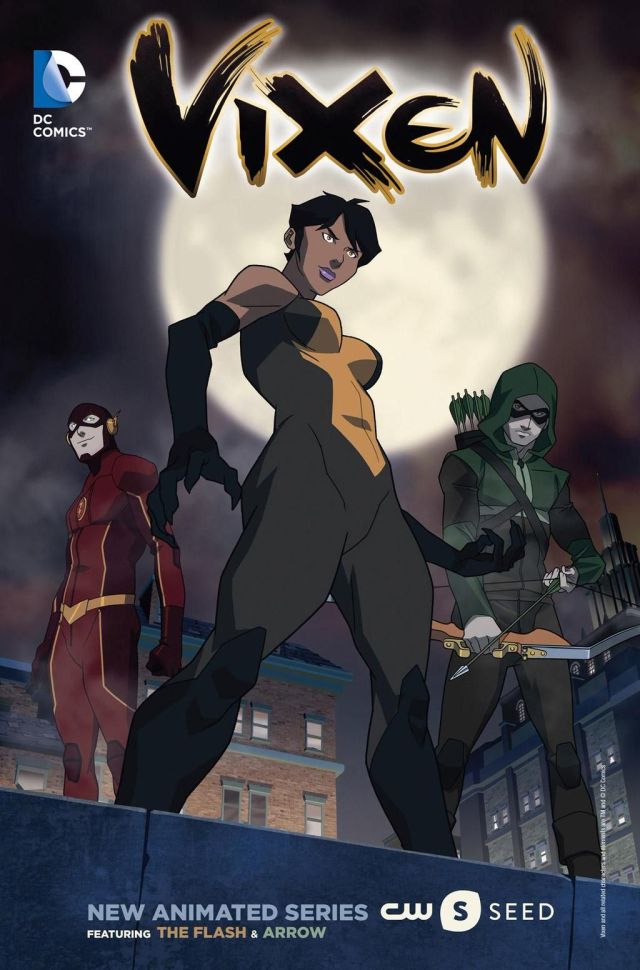 The Television Critics Association press tour has been chugging along talking to some of our favorite creators and actors, but perhaps the most exciting news to come out of it so far is that DC Comics superhero/model Vixen is getting her own animated digital series.

Mari Jiwe McCabe, known as Vixen, is an African character who first appeared in the comics back in 1981. She inherited a special totem from her parents (passed through the generations) which allows her to tap into the powers of animals. She began a career as a model in New York before going back to Africa to discover her destiny and deciding to become a hero (while still keeping her day job). She’s been a member of the Suicide Squad and the Justice League in the comics and featured in the animated television series Justice League Unlimited, but many have been waiting for DC/Warner Bros. to give her the spotlight. And now they have.

According to reports, Arrow executive producer Marc Guggenheim will be leading the charge with an animated series set to debut in the fall. There’s not much else known at this point except that it will air as a digital series on The CW’s Seed and will somehow tie in to the network’s Arrow and The Flash live-action series. You may recall a few months back Warner announced new digital production unit called Blue Ribbon Content, which would be producing a Static Shock live-action digital series. No word if they are also producing the Vixen series, but if it’s successful, I wouldn’t be surprised if she was cast to make appearances in live-action.

Meanwhile, surprising no one, The CW renewed Arrow for a fourth season and The Flash for a second. Here’s what their stars had to say about it.

Season 2 baby!!! Thanks for watching!! We’ve got PLENTY more to come.

[UPDATE] On the Vixen news, Comic Book Resources spoke with Guggenheim about what we can expect. He says it’s definitely set in the Arrow/Flash world and that we’ll even be getting a few plot points explored there.

“Vixen’s such a great character. First of all, she represents magic, which is an area that we haven’t explored on either of the two shows just yet,” Guggenheim told CBR. “The other thing is, it’s a strong African-American hero who’s, like I said, a former Justice Leaguer. It’s set in Detroit, as a nod towards those Justice League [Detroit] stories. It’s done with the same love of the source material that we bring to everything.”

Guggenheim also said Keto Shimizu and Brian Ford Sullivan are two of the writers involved and that the animated medium will give them a higher production value to work with. However as for whether or not we’ll see Vixen in live-action:

We always say “never say never,” and if the character resonates with people, that would be wonderful. I would love to be in a position where CW said to us, “Hey, we want a ‘Vixen’ live-action show.” That’d be wonderful. We’ll have to sort of see how things play out.

Read the rest of the interview at Comic Book Resources.