I'd be suspicious of letting Barclay near one of those things. 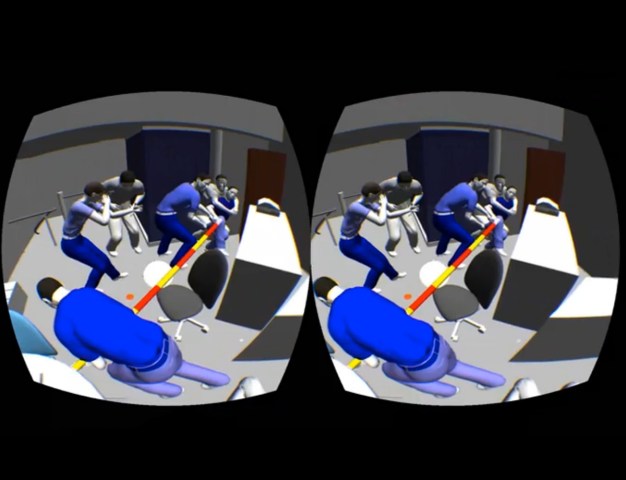 Do you have the uncanny ability to imagine exactly how a violent crime might have taken place with very little spatial information to go on? If so, then you might be Will Graham, and we’re very sorry about that. For everyone else, being on a jury could one day involve strapping an Oculus Rift to your face and watching a crime reenactment play out in real time.

While forensic information is traditionally presented to the court via 2D representations on paper, 3D maps and diagrams of crime scenes are no longer as uncommon as they once were, which many people in the field believe can help to make jurors to make better-informed decisions about a defendant’s possible guilt or innocence.

“We have detailed measurements and all this 3D information, but then we hand it over on paper, and that comes with a loss of information,” Lars Ebert, who works at the Institute of Forensic Medicine in Zurich, told New Scientist. “But the second you see [a bullet’s trajectory] in 3D, you know where it originated, where it goes, how close all the people and objects are.”

Ebert and his colleagues are currently developing a program they’re calling the “Forensic Holodeck,” which uses the immersive technology of virtual reality headsets like the Oculus Rift to place viewers directly inside 3d reconstructions of crime scenes.  I’d correct them on their misuse of the term  (The Holodeck doesn’t need a headset, which is sort of the point) if it didn’t sound like the coolest thing to ever exist.

The above video is a recreation of a shooting that occurred in Zurich, populated only with details relevant to the bullet’s trajectory—height, arm-length and posture.They presented the reconstruction to police officers present at the shooting, who were impressed by the accuracy of the model.

The technology might also be used to show jurors scenes from the perspective of different people who were there, in order to demonstrate whether a witness could have accurately identified a suspect from a particular angle.  But as always, there is the possibility of unintended bias. “Think of a murder scene: whether you view it from the point of view of the murderer, the victim or a third person will totally change your perception of what’s happening,” says digital reconstruction developer Damian Schofield from the State University of New York in Oswego. Either way, he notes, it’s only a matter of time before we start seeing it show up in criminal courts.