Researchers May Have Found Mythic Viking Compass | The Mary Sue

Intriguing Crystal Found on Shipwreck Might Be the Mythic Viking Sunstone 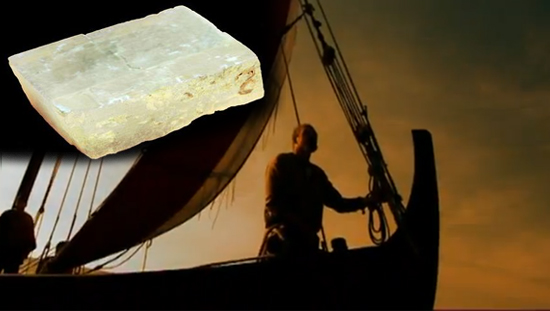 Generally only archaeologists and geologists get excited when another slab of rock is unearthed and dug up. But a few things about this one particular chunk of calcite made it hit our radar: This block of whitish rock was pulled out of the wreckage of an Elizabethan warship at the bottom of the English Channel, and the Vikings were purported to have used it to navigate the high seas. Shipwrecks, magic stones, and Vikings are always good geek fodder.

Researchers at the Alderney Maritime Trust published a paper this week claiming that this Icelandic block of crystal — known as the Alderney Crystal, discovered in 2002 — is a legendary sunstone used by Vikings or other medieval mariners as a solar compass to navigate the seas. When the Sun was veiled by clouds, fog, or simply had dipped below the horizon, the sunstone was believed to reveal the position of it regardless.

Sunstones, they argue, possess birefringence, the optical property of some crystals that allows the viewer to determine the direction the light passing through it came from. To the Vikings, this might have been magic, but the optics don’t care if you understand them or not. “You don’t have to understand how it works,” Albert Le Floch of the University in Rennes agrees. “Using it is basically easy.”

The Alderney Crystal, Le Floch says, was once transparent, but sea water turned it milky white. Calcites are sensitive to acid, sea salts, and heat, and that’s why no stones like this one have been found before. They just degrade too fast.

Vikings were brilliant mariners. They knew how to use the skies (Sun, Moon, stars), the mountains, and even the migratory patterns of whales to give them their sense of direction. Even so, historians have been unsure how they managed to navigate the vast ocean between their home — the land of the ice and snow — and modern-day Canada. The theory, that Le Floche and others maintain, is that when the Sun hid its face, they’d pull out their trusty magic crystals to help them deduce its location. There is a reason the crystal is described as fabled, as they features in some Viking legends as magical stones. One in particular tells of St. Olaf, the King of Norway, who used a “sunstone” to discover the location of the sun through a snow-filled sky.

By the 16th century, magnetic compasses were already yesterday’s news, but they weren’t particularly reliable. No one wants anything to malfunction on a ship full of Vikings.

Skepticism is inevitable, of course. Donna Heddle, the director of the Center for Nordic Studies at the University of the Highlands and Islands, says this is all mere speculation — which, of course it is, as there are no 16th century Vikings on hand to interrogate. She says:

“There’s no solid evidence that that device was used by Norse navigators. There’s never been one found in a Viking boat. One cannot help but feel that if there were such things they would be found in graves.”

Still, we like to believe. Maybe sunstones were used, along with the hammer of the gods, to drive the Vikings’ ships to new lands.